The Lleyn are Respected in Lincolnshire 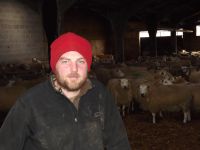 You have to admire DanielŌĆÖs achievements. Daniel originates from Wakefield where he comes from a non-farming background. His grandfather had a small holding and purchased some highland cattle and that was it, Daniel wanted to farm. He now manages the Livestock enterprise for TP Radford, Grantham and sits on the Lleyn Sheep Society Council.

Daniel left Bishop Burton College and worked for two years down near Salisbury at the Wiltshire Wildlife Trust. Through his Highland Cattle connections he then got the job with TP Radford.

It is seven years ago since Daniel and his wife Marie moved to Holme Farm, they got married in the local church and now have two children, Ruby (4) and Cameron (8 months). Marie informs me that Cameron is named after the bull which was successful for Daniel at Oban!

When Daniel started at Holme Farm he straight away had to role his sleeves up. He had little knowledge of 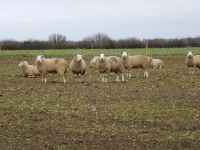 sheep but made it his goal to learn. There was already a flock of Lleyn ewes, Daniel went to Suffolk to buy a further 150 to bring the flock up to 450. They now lamb 550 ewes. There is 1500 acres of which 1000 are arable, 400 acres grassland and 100 acres of woodland. There is a separate arable team and a full time game keeper. Daniel is the sole worker with the livestock although contract help is brought in at lambing time and busy periods. Daniel says the Lleyn are respected on this farm, they are considered to be ewes that just get on with the job, they are maternal and milky and suit the system.

The pure-bred section of the flock lamb from 20th February for two weeks. The remainder of the flock then follow on and these are run crossbred having been tupped by Charollais, Suffolk or Texel rams. The Charollais is used across the gimmers as it gives them an easier lambing for the first time. The Texel suits the demands of the local auction markets where their customers are looking for a white faced terminal sired lamb. This early lambing is planned to suit the grass growth of the Eastern side. Usually March and April are productive months for grass here says Daniel and we can often see July and August very dry with the grass burnt off. ŌĆ£We lamb early to make the most of the grass when itŌĆÖs hereŌĆØ says Daniel.

The ewes are tupped on grass and then moved to stubble from mid-November/early December. They are brought inside approximately three weeks prior to lambing. No concentrates are fed outside as the stubble turnips supply the ewes with plenty of energy. 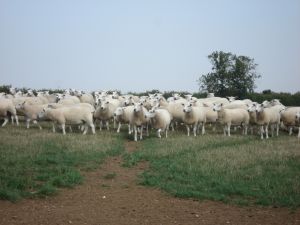 The pure-bred flock enables Daniel to breed his own replacements, but it also means he can breed and sell registered rams. As the farm has been looking to increase numbers, females have not been sold for a couple of years but there will about 100 available to sell this coming autumn.

In 2017 Daniel won the shearling ram class at the Society sale in Ruthin. He has also had the championship at Lincoln Show for the past two years. In 2015 he won both the best pen of ten and best pen of five ewe lambs at Ross on Wye which went on to be bought by a Belgian buyer.

There is some on-farm recording done to ensure the flock is operating as efficiently as possible. Birth weights, 8 week weights and 20 week weights are all recorded. Daniel says when he is selecting his female replacements he first looks at the sheep to make sure he likes the look of it, then he looks at the growth rates. He says he wants to produce lambs that are away sooner.

A new string to the company of TP Radford that Daniel is now looking to incorporate in his work has seen his employer Tim Radford purchase the majority share of an online meat retail company. Mr Radford is looking for the farm to help supply the company with Suffolk x Lleyn lambs. The Suffolk is the terminal sire of choice for this business as much of the lamb goes in to the catering trade and they like heavier joints and cuts. Daniel tries to select lighter boned Suffolk rams to compliment the Lleyn ewe.

If all this wasnŌĆÖt enough to keep Daniel occupied, he also has a herd of Registered Highland Cattle to manage. 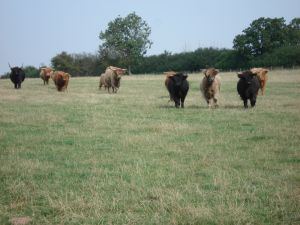 He has made great headway with the herd, establishing a respected name. He put forward the champion bull at the Highland Cattle Society Sale in Oban 2017 and he has exported a bull to Germany this year already.

So, as you see hard work does pay off. Daniel notes how Society Ram Inspections have helped him learn a lot. In the space of seven years he has made huge improvements to the stock and is now looking forward to the new challenges he faces with different demands on the livestock at Holme Farm. He intends to stay with the Lleyn, ŌĆ£she is proving a good mother and milky ewe which is working well with both the pure and crossbred systems. The Lleyn is adaptive giving me various options and helping to shield me from market changes in one particular area at any one time. 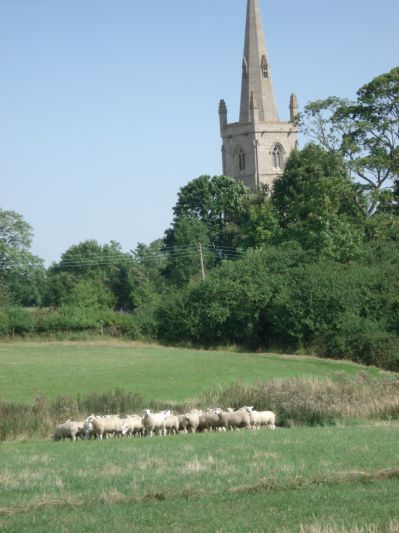