Lleyn key to success of Sheep Farmer of the Year

When the judging panel visited Crosby's Brookmount Farm, in Saintfield, County Down they were impressed with not only his business-like approach to sheep farming but also his progressive breeding strategy and contribution to industry improvement.

Crosby feels his farming success lies in his ability to record and analyse a huge amount of data, enabling him to identify performance in all areas of the business. To this end, he has embraced EID and introduced a system of easy handling facilities, resulting in a 750-ewe flock that can be managed by one man. By utilising the information collated through his Shearwell EID system Crosby can identify higher performing ewes and select breeding stock accordingly, which has improved overall flock performance considerably.Â

Easy management is key to the well-oiled operation, which was the main drive behind the switch in the breed of sheep kept on the farm. Crosby is often tied up in the office or out with one of his busy contract fencing teams, leaving the farm and fencing yard in the hands of one man.

Over the past few years the sheep flock has changed and increased dramatically, doubling to 750 breeding ewes bringing the 76ha (186 acres) unit to stocking capacity. To improve efficiency, and ultimately profit margin, the entire flock has been gradually changed from Continental cross, Greyface and Mule ewes to a closed flock of pure pedigree Lleyn and cross Lleyn ewes. By achieving greater economies of scale, coupled with improved performance, the new system is scheduled to virtually double gross margin from ÂŁ20 per ewe to between ÂŁ35 and ÂŁ40 per ewe and achieve sustainability.

Although the flock has doubled in size, labour, often a farm's biggest hidden cost, has remained the same. Sheep are gathered and moved within the farm via a series of grass tracks alongside fields. To aid management, a number of small paddocks have been created around the farmstead.

Lambing time has been made considerably easier by the Lleyn flock, reducing the need for additional 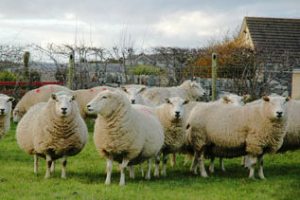 labour at a traditionally busy time, as "Lleyn ewes do not need help, and their lambs are lively, they're soon up on their feet sucking."

Apart from increasing efficiency through their prolificacy, good conformation, and tremendous maternal ability, Crosby insists the slightly smaller framed Lleyn requires less feed and allows higher stocking rates whilst rearing a similar weight of lamb than heavier crossbred ewes. Last year he achieved 30kg/ha of lamb more than the year before and aims to keep improving this figure. Crosby explains how he can clearly illustrate the thriftiness of the Lleyn by comparing forage requirements between Texel cross and pure Lleyn ewes. One block of silage placed in front of 30 Texel cross ewes lasted two days, while the same sized block introduced to 30 Lleyn ewes took three days to eat.

Crosby is heavily involved with the sheep industry within Northern Ireland . He is a founder member of the Northern Ireland brand of NSA and acts as a trainer in various rural skills at Greenmount College . In another effort to help improve the industry, he is working with Agri Food and Biosciences Institute in a number of trials aimed at easing the workload for sheep farmers. A long time supporter of local lamb marketing group, Strangford Down, Crosby operates a collection centre for the group, allowing members to drop smaller loads of sheep for onward consignment to the abattoir. Although not a money-making enterprise, it does help members cut their own costs and improve efficiency at the abattoir. Brookmount has also been a Focus Farm, enabling Crosby to share his method of improving profitability through recording and a thorough understanding of business costings, with many other farmers.

Crosby is optimistic for the sheep industry within Northern Ireland and hopes that his carefully calculated decisions on the best options for his unit, based around the Lleyn, will deliver sustainable solutions and a profitable future.