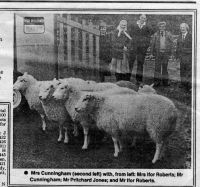 My husband and I had had a small flock of cross bred ewes for several years and we were looking for a breed of pedigree sheep to add interest to the enterprise.

In 1984 we took our vet student son and his friend to the Royal Show at Stonleigh. The boys were keen that we should look at a breed called Lleyn that they had heard about at college. We duly found some Lleyn sheep, liked what we saw and decided to explore the breed further.

That autumn we went to Wales and visited a few flocks in the North of the country.  We bought 11 ewe lambs and a ram lamb from the late Mr Ifor Roberts and the late Mr Pritchard Jones. One of the ewes from Robin Pitchard Jones became the foundation ewe of our flock for many years. We became members of the Lleyn Sheep Society and were allocated the Flock No: 239.

These were the first Lleyn sheep to be imported into Northern Ireland. They had to be quarantined by the Ministry of Agriculture at their isolation unit near Lough Neagh before we were allowed to bring them home. A batch of gimmers we bought at the Lleyn Sale in Malvern a few years later were quarantined at an “approved” farm in Scotland. While there a Suffolk ram broke out and spent the night with them. At that time only one veterinary practice in Northern Ireland had a scanner. They pronounced them empty so all was well!

Our market in those early years was for rams to put on Wicklow Cheviot ewes to improve prolificacy.  Northern Irish farmers like big sheep and our first Welsh ewes were much smaller than they are today. The trade in Wales was for small lambs of about 15kgs being sold to Spain for barbeques.

In the nineties we sold a lot of breeding sheep to the South of Ireland.  The paperwork was much simpler than it is now. Our flock has been Scrapie Monitored since the scheme began so we can still send sheep “over the border” without too much hassle.

Gradually people in Northern Ireland began to recognise the great potential of the Lleyn ewe – her superb mothering ability, easy lambing, prolificacy, good feet and medium size.  Our flock seldom went out to grass with less than 200% lambs. We built the flock up to 120 ewes and never had any trouble finding customers for our ewe lambs or gimmers.

We have always tried to breed for good conformation and plenty of milk. Our prime lambs were marketed through Strangford Down Lamb Group and for a while we were able to get feedback on the classification of each individual lamb enabling us to identify the best ewes. When that stopped we joined “Signet” and were able to pick out the better performing ewes from their records. Signet has become too expensive to use with a very small flock so we now rely on weighing the lambs at birth and at weaning.

Rams purchased from Wynne Davies (Flock 50) and Charles Sackville Hamilton (Flock 172) helped to improve quality – though one produced pink noses!  We went to Ruthin Sale in 2004 and came home with C161/Flock 599 from Emyrs and Dylan Jones. This ram had a spectacular influence on our flock and in his later years helped to get Charles and Andrew Kennedy’s flock off the ground.

A group of enthusiastic breeders formed The Northern Ireland Breeders Club in 2002. I acted as Chairperson for a number of years. The Club now has 30 active members, all keen to promote the breed.  Altogether there are now 70 members of the Lleyn Sheep Society farming in Northern Ireland.

Along with the sheep we ran 60 pedigree and half bred Salers cows. Castlewellan Show was the first show to stage both Salers and Lleyn Classes. We showed both for a few years, once winning the Championship with both the cattle and the sheep. In 2006 we moved to a smaller farm and now just try to take some Lleyns to Castlewellan, Antrim and Omagh shows. Before we moved we sold most of the cattle and had a very successful reduction sale of 70 Lleyn ewes.

The Lleyn Society sale in Ballymena is an “export” sale. All the sheep for sale at it have to come from Scrapie monitored flocks. This enables them to be exported directly from the sale to the South of Ireland.

Now with only 18 acres we have 6 cows and 22 ewes. Having such a small flock we now have a part share in 3 rams with Charles and Andrew Kennedy (Flock 1618). The stock is wintered inside with the cattle on slats and the sheep on expanded metal for ease of management. This may not be ideal but the ewes keep very clean and dry and their naturally good feet cope well on the “wire”.

Having had rather too many birthdays we invested in a Ritchie Combi Crate and Roly and I can do most of the sheep handling ourselves without having to call on our very pleasant and helpful neighbours.

For a number of years the Lleyn Society has had a stand at the Royal Ulster Agricultural Society Show at Balmoral with sheep on display to promote the breed and in 2014 the Show put on classes for Lleyn sheep for the first time. Wynne Davies, the Society Chairman, was the judge and we were lucky enough to win the Championship with a 2 year old ewe – great excitement and reward after 30 years with this wonderful breed!