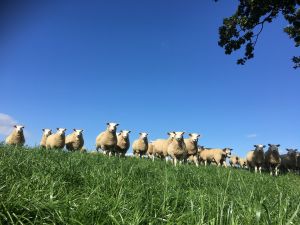 John McKavanagh from Castor Bay Road, Lurgan in Co Armagh has returned to farming after running a successful Garden Centre Business from the farmyard for almost 30 years. Here is his account of how his flock of Lleyn sheep has developed over the last four years.

Entering its fourth lambing season 2018 Loughview Lleyns now run 270 breeding ewes and 80 ewe lamb replacements on the shores of southern Lough Neagh. After having been out of farming for quite a number of years I concentrated on my other business, namely a garden centre. I had always intended to go back into farming in some shape or form. At the early stages I hadnâ€™t necessarily decided that sheep was something I intended to farm. We previously farmed suckler's and having no experience of sheep farming, I really was going in at the deep end.

I made the decision in 2013 that sheep would be the choice of livestock I wished to keep. Â I set out on a very interesting journey going to every sheep breeds Annual Â Society Sale in Northern Ireland. Having looked at every breed out there the Lleyn breed was the most appealing to me. Also, whilst out of farming we had quite a bit of fencing done by Crosby Cleland and as a Lleyn breeder himself, he gave the breed a huge recommendation. The fact that we had a lot of polytunnels from the garden centre meant that there would have to be no outlay on buildings and that we would concentrate on buying stock rather than building lambing facilities.

In May 2014 we set about purchasing some hoggets and ewe lambs from Charles & Andrew Kennedy. In our first year we added to these at the annual sale from Aubrey Bothwell and Crosby Cleland. These initial ewes created the foundation of our breeding eweÂ  flock. Our initial stock ram was purchased from Charles & Andrew Kennedy, this was a ram whose dam was from flock 1312 (Mr Hamish Goldie) and the sire, flock 599 (Luest Flock of Emrys & Dylan Jones). I knew this was probably the most important ram we ever purchased as he would form the backbone of most of our future breeding ewes. He has never disappointed and has breed well in, good feet, conformation and strong Lleyn characteristicâ€™s throughout. He is now one of 4 stock rams and still breeding excellent stock. We purchased two other rams from flock 1621 (Seamus Killen) and both are breeding excellent stock to add to our flock. In 2017 we visited the Carlisle annual sale and purchased a new stock ram from flock 809 (Mr DJ Steen), hopefully this new bloodline will be as good an addition to our flock as the previous rams.

Further purchases of ewe lambs were made from Seamus Killen and Russell Millen over the pastÂ Â Â Â  years, so a lot of the top flocks in Northern Ireland are playing a role in our bloodlines. No future females are intended to be purchased only selected rams from quality flocks thus running as a closed flock. The Lleyn have performed well for us in the past three years whilst the majority of females have been retained for breeding and males sent to ABP group for slaughter, our kill grades have been steadily improving and getting 19% to U3 grades with the majority being R2 & R3, so we feel we are selecting the right ewes to retain for breeding.

Having purchased from so many bloodlines there have been challenges in getting the correct ewe that we want for our business. As there is a variant in the size of Lleyn ewes and getting an even balance has been very important to our system. We have found the more evenly sized ewe we have the easier it is to programme feeding in winter and concentrates before lambing and primarily getting a better lambing percentage. We have definitely found the medium sized ewe with Â good proportionâ€™s all round performs better and is more likely to reach the goal of weaning her own weight of lambs , not getting too heavy herself and putting her resources into carrying two lambs and milk production is our ewe of choice.

We keep a close eye on all our sheep and their lambâ€™s records through their life on the farm; at a busying lambing itâ€™s easy to forget a difficult birth or problems with milk production so each ewe has a diary from when they enter the flock as a replacement and all records kept up to date. This keeps us well informed for selection at culling time, we record the number of days from birth to slaughter and this has been a key point to selecting the top ewes and replacements. Ewes that cannot produce 2 lambs in under the average number of days to slaughter are culled. We work on the present years averages as weather conditions each spring can have an impact on finishing times. This year we intend to introduce a Hampshire Down sire to ewes that perform below the average number of days to slaughter. We hope that by using the Hampshire cross this will increase their lambsâ€™ live weight gain as the ewe is still correct in other aspects.

It has been challenging and rewarding getting to grips with farming a new enterprise. I have realised it can 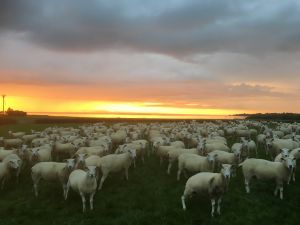 take several years to get your breeding system the way you want it. Producing the best females as replacements or selling at the annual sale is foremost in our mind. Getting lambs finished and away as early as possible pays dividends freeing up valuable grazing at crucial times.

This August 2018 we will be holding an open day to view our flock, hopefully this will give other breeders a chance to view the stock which we purchased from them and to give newcomers to the breed an insight on how the Lleyn can quickly adapt into a new farming enterprise and perform at the level of efficiency required in todayâ€™s environment to give us a good return financially.