Change of breed: A success story 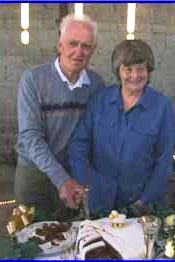 Originally from Co. Donegal in Ireland , Robert and Eileen Edwards now farm on the Ards Peninsula in Co. Down, N. Ireland . Previously Robert & Eileen farmed the largest flock of pedigree Texels in the whole of Ireland . This situation has drastically changed and is now completely pure Lleyn!!

Both Robert and Eileen admit they are not getting any younger, having had their 50th wedding anniversary a few years ago. While they had great admiration for the Texel sheep and enjoyed working with them, they felt they needed to change to an easier care sheep breed if they were going to continue sheep farming. It was not an easy decision to switch after a 20-year association with the Texel breed. Robert explains that he considered many breeds and after talking to various breeders made a decision to experiment with the Lleyn breed.

In 2004, 80 scrapie-monitored hoggets were purchased at the sale in Ruthin, Wales . Robert wanted to be in the position to expand the flock quickly if he liked what he saw and so two purebred Lleyn rams were also bought to breed pure. Robert and Eileen have found that the ease of lambing ewes was the major advantage with the breed and it was this attribute that convinced them to increase numbers. All female sheep were kept to build the flock up to its current position.

It did take a while for some differences to be realised. Robert admits that it took him time to get used of seeing a kill sheet with all E and U grades change to mostly R's and a small number of Us or Os. It is a situation he is now happy with as he states ''There is little difference in price from an R to a U grade and the extra lambs sold plus ease of lambing more than makes up for this. As a co-ordinator of the local lamb group, I get to see the grading and price dockets on a weekly basis coming back from the meat plant. I can see that our pure Lleyn ram lambs match and some weeks out-do the lambs going away from other high priced, high input so called meat breeds."

The Edwards' strain of Lleyn have been consistently producing and rearing more lambs per ewe, this is 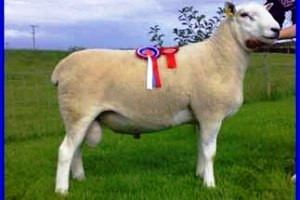 backed up by last year's customers letting us know from their scanning results that they are scanning just over 200% from hoggets. Extra lambs born and reared make a more profitable lambing system therefore more profit per sheep.

Every sheep going to the ram has its own ram number painted on its back; this stays on till clipping time. At lambing time it is easy to see right away which ram fathered the lambs, and then this information is all recorded with tag numbers etc for future reference. Lambs are EID tagged and have tails ringed at 2-3days old. This also means if a good lamb is spotted in the field with their mother, their father can be identified immediately without having to catch them and read their ear tags.

Weaning rate on the farm is now hovering around 200 %. Numbers have actually increased in the last few years and there is approximately 700 breeding sheep on the farm at present. Ewe lambs continue to be kept with none of them usually sold for slaughter. These are then sold either privately or at the special Society sale as lambs or hoggets with the remaining kept as our own replacements, although last year we did sell some strong in-lamb lambs. The majority of ram lambs are all sold for slaughter being creep fed to get these away earlier. Of the best ram lambs, 10-15 are kept for breeding on the farm or sold to other breeders.

This past year has been the wettest in years and so all ewes except 200 ewe lambs have been housed since December on straw, due to lamb from February onward. 2012 lambing was the easiest yet, it was a great season with high prolificacy and low mortality. Hopefully the coming year will be just as good... 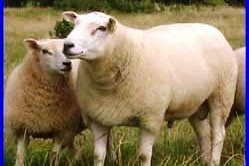 Hugo was bought as a ram lamb in 2007 from a neighbour Mr. Hugh Warden. He was sired by a ram from Bronallt Lleyns (Flock 50) and his dam was from Eifion Ellis (Flock 227) so again pure Welsh breeding. This ram has been a major force behind building our flock into what it is today, he is still 100% on his feet and mouth and still working well.

We are a closed flock so getting the right ram is very important to us. We wanted to get what we call a special ram this year and we were happy to purchase Balintur Adonis or "Seamus" as he is now called from Mr. Seamus Killen (Flock 1621), we had spied him when he was shown at a local show early in the year and then got a good look at him at the ram inspection. We went to the sale in Ballymena to buy that ram specifically.

Management of such an enterprise takes a lot of organising but having a big family on hand is great. The day to day jobs are carried out by daughter Brenda along with her daughter Laura. Laura also works for our local vet, so gains access to all the up-to-date tips as far as that side of the business goes. Simple steps along the way can mean huge savings in time and money. Our oldest son Stephen is the transport boss [his words]; he drives the lorry, which is invaluable when we are running so many sheep to sales, markets and private deliveries. Then we have the "show team" consisting of Paul, Brenda's husband, who also runs our 'www.carrowdorelleyns.co.uk' website, Kyle, our grandson and Courtney, our great granddaughter. Also on hand to help out at lambing and harvest time are son and daughter David and Catherine and their families. When we say we are a family run business that's exactly what we mean!

Our vaccination programmes have been put in place in consultation with our local vet, Claire Ferris. Lambs
and sheep are protected from pasteurella pneumonia and clostridial diseases such as pulpy kidney by vaccinating with Heptavac-P Plus. We also dose against fluke and worms throughout the year and hoggets are vaccinated against abortion. All sheep have access to red or black Crystalyx buckets depending on what time of year it is. “Losing an animal, whether it is worth £60 or £600, for the sake of not having a well planned animal health regime defies all farming logic, so we have always vaccinated ewes in the weeks prior to lambing,” However, that vital immunity which is passed from ewe to lamb only gives protection for the first few weeks of life, so we follow up with a lamb vaccination course. We ensure that every lamb receives two doses, four to six weeks apart. “Our veterinary surgeon advised us that by delaying vaccination we risked losing lambs due to common and easily preventable diseases. It is a gamble we are not willing to take.”

We had another successful year at shows in 2012 which is very rewarding as our flock is run very commercially and not specifically as a 'show' flock. The showing of our sheep is a great advertising tool which the whole family really enjoy. With that in mind, we remain extremely focused on breeding sheep with strong blood lines that help make commercial lamb production more profitable. “Unless pedigree Lleyn breeders keep the focus on supplying rams and ewes that match the needs of commercial flock owners, their sheep will not match up to other breeds . At Carrowdore Lleyns, we feel that we can still do this and keep true to the Lleyn Breed!”