I have a hazy recollection of Lleyn sheep back in the late 1980s where they were being used for fat lamb production on an organic farm and were described as prolific, fine-boned and quite small. As the years rolled on and the breed became more popular, I started hearing more positive talk about Lleyn sheep, as well as four other closely related breeds that often cropped up in the same discussion. These were the Clean, the Lean, the Lewin and, of course, that well known Welsh breed, the Lin.

It was some time before I eventually realized that the last four “breeds“ were merely testimony to the total inability of the average Anglo Saxon to pronounce the Welsh double L. However, in spite of the increasingly good news, it was to be sometime before our association became any stronger.

In 1985, when the Duchy Home Farm started its journey, we used the North Country Mule crossed with a 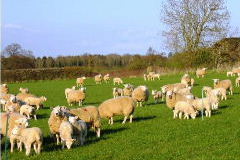 Suffolk tup. This produced good lambs that were easy to market and for 14 years we carried on using something that worked for us.

During the early days of organic conversion, the EU organic regulations allowed us, through a derogation, to sell our lambs as organic even though our bought in ewes were not. The ewes had to be fed and managed organically but, because they were not born on an organic holding, they could never be classed as such. At this stage it presented no problem and so we didn’t give it a second thought. As we progressed through the 1990s, it became clear that the EU was going to (quite rightly) stop the use of a derogation in this context and that we would have to either buy in organic replacements or breed our own.

The idea of a closed flock certainly appealed and both the dairy and beef herds on the farm are closed. In 1999 we purchased our first 23 pedigree Lleyn ewes and a ram. We used the ram’s spare capacity to cover some of our Mules and immediately noticed that the Lleyn served about three times the number of ewes when compared to our fairly lethargic Suffolks (I know it’s tempting but no human comparisons please). At our first lambing of both pure and crossbred, the births were easier with fewer assisted, and the lambs were noticeably livelier.

During foot and mouth we were unable to purchase any Mule replacements and so kept back some Lleyn X Mule ewe lambs to go to the Lleyn tup. These proved to be excellent ewes and helped us in our transition over nine years to a flock that is almost all purebred Lleyn – some of these crosses gave us eight crops of lambs and have only recently departed. 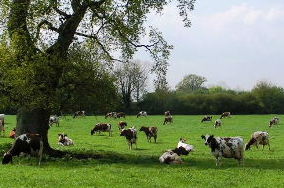 As an organic farm, we rely almost exclusively on clover for our nitrogen. Three years of clover grass leys give us enough nitrogen to grow four years of arable crops. The marriage between clover and the Lleyn sheep is almost perfect with all lambs fattening off the leys alone. There is also no need for concentrates to be fed to ewes lambing from mid April onwards because the clover leys are so nutritious. Our future is going to depend on this sort of system because the present model of conventional farming is unsustainable, due mainly to the energy input needed to make ammonium nitrate. There are many farmers who have glimpsed the future and felt the chill wind of high fertilizer prices. This will undoubtedly get worse both in terms of price and supply. The feeding of grain to ruminants will also need to be minimized, not just because of the energy embodied in the production of cereals but also because ruminants convert grain inefficiently.

We sell lambs to some very particular customers, such as the Ritz and Lidgates of Holland Park, at an average liveweight of around 42kgs. The lambs these days are far from small and kill out well because of their relatively fine bone. Another plus is the excellent eating quality of the meat, both in terms of flavour and texture. These qualities also follow through with mutton and, when the Lleyn appeared on the menu at the Ritz with other sheep breeds at the Mutton Renaissance launch, it was well received.

Ultimately, the future will need sheep that can fatten well off pasture, giving the highest quality meat in the most efficient way. There is now increasing evidence that the fat quality of meat fattened on pasture is better for our health. We often say that we are what we eat but, as one speaker at a Slow Food Conference said, “We are what what we eat eats”.