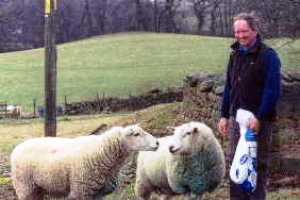 The Lleyn is revolutionising sheep production on a Cumbria hill farm. But father and son team of John and Mark Handley believe they still have their ace card to play as they capitalise on even more Lleyn genetics as part of a crossing programme underway in their flocks of Rough Fell and Herdwick ewes.

It's 10 years since the first Lleyn tups were used on the Handley's 600-acres at Catholes, near Sedbergh. The family have long been leading Rough Fell breeders - the flock holds the record price of £5500 paid for a Rough Fell ram - but the first Lleyn tup was tried instead of a Texel to produce prime lambs from some of the flock's Herdwick ewes .

"They left some absolutely fantastic lambs out of the Herdwick. The Herdwick is well known for being a good sheep to lamb and is very independent. The less you handle her the better but there was no need to touch any ewes lambing to the Lleyn.  "They were easily lambed and the lambs were sharp and up and sucking straight away," says John Handley.   There are 1000 Rough Fell ewes on the farm as well as 150 pure Herdwicks. Ewe numbers have been boosted by another 500 sheep of various hill-breed crosses after another farm was bought earlier this year.  "We've had Herdwicks for 15 years and run them on a very dry piece of common land that's more suited to Herdwicks than Rough Fells. All the Herdwick ewes are bred pure up to three-shear; after that they're crossed and now they all go to the Lleyn." 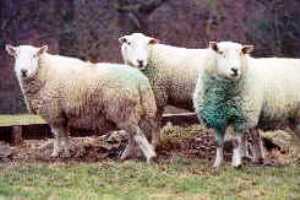 even bigger advantage.  "You've got to keep Herdwick ewes with Texel-sired lambs on lower pasture. But Herdwicks suckling Lleyn lambs can go back to the hill. They rear the lambs easily to produce a really good prime lamb at the end of the summer."  After using the Lleyn on the Herdwick for three years it was decided to try the Lleyn on some of the Rough Fell sheep.  "We're very choosy about our Rough Fells and carefully select ewes to breed pure to sustain our flock replacements. One year we had 30 shearlings that weren't good enough to breed pure so we decided to tup them with a Lleyn."

The outcome was about to instigate a radical change in sheep production at Catholes. John Handley described those first the Lleyn x Rough Fell lambs as "absolutely tremendous".

For the last two years 10 Lleyn tups have been used and it looks like even more will be used this season.
About 400 ewes will lamb to the Lleyn in. The intention is to retain around 120 Lleyn x Rough Fell gimmer lambs to form the nucleus of a new half-bred ewe flock that will be put back to the Lleyn to produce threequarter-bred prime lambs.

"These half-bred sheep will not be molly-coddled. They'll be run on the fell as hoggs - and we know they can cope with that - and will be tupped as shearlings and returned to the fell to rear their lambs," says John Handley.  He's convinced that the Lleyn can not only produce a hardy, easily managed and prolific half-bred ewe but can also produce a high-value threequarter-bred prime lamb.

The farm has already retained 40 Lleyn x Herdwick ewes and they have performed "brilliantly".
"If any breed can make inroads into the half-bred market it's the Lleyn. It's doesn't need the feed, it isn't a glutton, you can winter it at a much higher altitude than other half-bred sheep and it will lamb outside. Our Lleyn-sired lambs never come under cover. "  Lambing at Catholes starts on March 20th with ewes carrying Lleyn lambs followed by the horned sheep in mid-April.  "Lleyn-sired lambs have a really thick jacket. No matter what the weather is like they are up and sucking in no time.  "A Lleyn x Herdwick lamb is as hard as nails. If I lived in the Lake District I would be falling over myself to get my hands on a Lleyn tup. More fell farmers have got to try the Lleyn on the Herdwick; they'll be amazed at what they get and they'll be back for more."

So far virtually all the Lleyn-sired progeny has been sold as prime lambs. This year, after selecting the nucleus for the new half-bred flock, some Lleyn-cross gimmers may be offered for sale as potential breeding sheep.

The Catholes flock is well known for the quality of its pure-bred Roughs Fells and draws the first April-born horned wether lambs at 40kg by the beginning of July.  "We can do that with single-born pure bred Rough Fell lambs but we've found that if we put Herdwick ewes suckling Lleyn lambs on to good grass we can get lambs away at 36-40kg in early July with no creep feed.

"That can be achieved very easily. It just confirms the huge potential of the Lleyn."