JM Ridley & Sons have farmed at Mickley Moor Farm, Prudhoe, Northumberland since 1962. The farm is 500 acres of grassland at 200 metres above sea level with medium loam soil and approximately 28 inches of rainfall a year. The livestock consists of a flock of 310 pure Lleyn ewes, 10 Texel x Lleyn ewes, and 35 others including Herdwicks, there is also 200 head of British Friesian dairy cows.

In 2013 the Ridley’s purchased 211 gimmers and two tups from Messrs Dugdale and one from Janice Arnold at the Carlisle Society sale.  The aim of purchasing the Lleyn was to become a closed flock to breed their own replacements and control disease as previously the farm had regularly bought in ewes.

The flock is used to produce mainly cross lambs for the commercial market as well as ewe lambs for flock replacements. When purchasing a Lleyn ram to breed flock replacements Michael Ridley focuses on figures for maternal traits and attributes to breed female replacements, also good feet is very important as health is a priority for the closed Lleyn flock on the farm. Michael Ridley purchases a new Lleyn tup every three years to prevent any ewes going back to their sire.

Michael Ridley had seen recommendations about the breed from various places and personally from Mr Nelless who enthused about the benefits of Lleyn and the breeds maternal traits. The Lleyn flock is wintered on dairy cow grass residues with additional silage if needed. The sheep are scanned mid-January and the majority of flock are started on concentrates approximately one month before lambing with any triplets fed six weeks prior to lambing. Lambing takes place indoors in two separate sheds with the singles and pairs in a larger shed and triplets in smaller shed so they can be fed correctly according to number of lambs. Sheds are close to each other to allow for wet adoptions for ewes only having singles, Michael says the maternal instincts of the Lleyn ewe means adopting lambs is very successful, the aim is to turn every ewe outside with a pair of lambs, hoggs are lambed indoors in a separate batch and lamb two to three weeks after ewes.

Michael Ridley says his flock of Lleyn have lived up to all the recommendations and there are still some of the original purchased Lleyn ewes lambing at nine years old which highlights the longevity of the breed but the major improvement in the farm’s sheep enterprise is the numbers of lambs that are recorded at six weeks old to the number of ewes put to the ram and the weight of these lambs is a real eye opener. Michel Ridley said we knew the Lleyn ewe was a medium sized ewe but the lambs grow faster and reach target weights sooner from the Lleyn than the larger ewes that we previously kept on the farm. Michael commented the “Lleyn fits perfectly into our farming system being easy lambing with plenty of milk meaning the lambs are sold off the ewes before grass becomes less mid-summer onwards.” The flock is lambed late March to early April and the ewes and lambs are turned straight out on grass after lambing, Michael says with the Lleyn ewe his concentrate usage is less and the vets bill for the sheep enterprise is very low due to the flock being healthy and breeding our own replacements.

The farms Lleyn flock scan around 220% with a few multiples but these are successfully adopted onto other ewes. The farm produces prime lambs which are sold at 42-45kg from seventy percent of the flock with the Texel and Texel x Beltex rams used as a terminal sire.

All lambs are tagged at a few days old, double tagged for the Lleyn ewe lambs and single slaughter tags for anything else and recorded against their mother on the FarmIT system. The EID tags make recording weights easy with the Trutest weigh system. The aim is to increase recording with Michaels wife Sarah recording weights for Lleyn Gold, and investigating individual ewe statistics to breed the replacements from the best ewes.

Michael and Sarah Ridley plan to build on their experiences with the Lleyn flock the Ridley’s say “we are very pleased and impressed with the performance from our Lleyn and would have no hesitation in recommending them to anyone thinking of using the Lleyn breed in their sheep farming enterprises.” 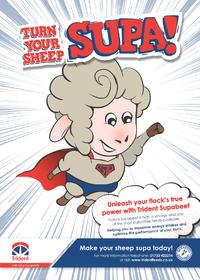