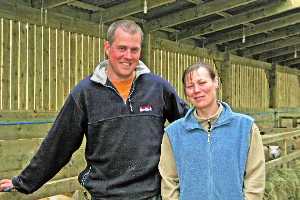 Their system means that as soon as the last hoggets leave the farm, there are new season lambs ready for market the following week. While the auction system provides no price guarantees, their aim is to be near, or at the top of the market, at the weekly sales.

Rob says that with sales spread over the year the system has served them well. In addition, it has offered valuable continuity for buyers, many of who come back time and time again for their lambs.  While prime lamb sales are the core of their sheep enterprise, sales of breeding females are also an important part of the business.  “Farmers see our prime lambs going through the auction ring on a regular basis. These lambs are showing them what our breeding animals can produce.  “The problem with selling breeding females is that prime lamb producers often look at them as a meat animal rather than a breeding animal. This can be a particular problem with maternal breeds, such as our own Lleyn”.

“I think that breed societies for maternal breeds, in the cattle as well as the sheep world, should do more to show what their breeds can produce in their promotional work. Showing the pure breed is important, but we also have to show its potential for the commercial producer,” said Rob.

Rob and Tabitha moved into Scales Farm, Berrier, near Penrith, in November 2000. As part of the deal, they took over the farm's existing stock of about 600 Swaledale breeding ewes and about 80 suckler cows.

The farm takes in 800 acres of owned land plus around 120 acres of rented land lying between about 980ft and 1,100ft above sea level. The land is relatively flat and all down to grass, apart from some kale grown for finishing lambs. A little reseeding of grass is carried out each year, but is very limited by the stony nature of much of the land. The farm is exposed and in a high rainfall area and straddles the border of Cumbria 's Lake District National Park . 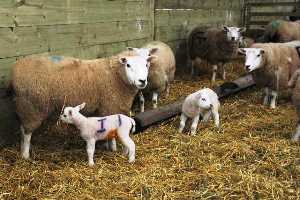 Swaledale ewes. While the resident sheep provided Rob with a useful base for his new farming enterprise, he looked to the gradual establishment of a closed system breeding its own replacements, producing both prime lambs and breeding stock for sale.

That was before the 2001 foot-and-mouth epidemic took hold and the couple lost their entire sheep flock in a contiguous cull.

“We would never have wanted to lose our existing flock in such a cruel way, but it did give us a blank sheet on which to move forward. We looked at various breeds, but it really came down to just two. What we wanted was a hardy sheep capable of being wintered on this farm and capable of producing high quality lambs and breeding stock.”

“We started by looking at Cheviots, and then at the Lleyn with the aim of crossing both with the Texel to give a commercial breeding ewe. There was not a great deal of difference between them, but we felt that the higher prolificacy of the Lleyn gave it the edge. We also have a friend, John Page of Eden Hall, Penrith, who has run a Lleyn flock for some time and, largely based on his experience, decided on the Lleyn.

“Stock at Scales Farm is now about 1,900 Lleyn and Texel cross Lleyn breeding ewes plus 500-600 ewe lambs built up with a mix of home bred and bought in sheep. The flock will become a closed unit as soon as possible.”

“Apart from the sheep, we have about 70 Limousin suckler cows, both spring and autumn calving, put to the Belgian Blue with all calves sold as young suckled calves,” he said.

The present sheep system has been developed with the help of a large purpose built shed completed two years ago. This means that the farm can now hold up to 1,000 ewes under cover at any one time. The shed is also used for turkeys reared for the Christmas trade “to help pay for the shed”.   Sheep production is based on the Lleyn flock, a portion of which is put to the Texel to produce Texel cross Lleyn commercial breeding ewes. These are in turn put to Beltex and Beltex cross Texel terminal meat sires for prime lamb production. Breeding stock sales have been limited by the need to build up the home flock numbers, but has been a mix of pure Lleyn and, particularly, Texel cross Lleyn commercial breeding stock. 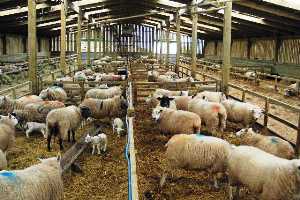 The flock is pregnancy scanned; peaking at 1.97 lambs per ewe for the earliest group and levelling out at about 1.7 lambs per ewe for the main flock which Rob feels is about right for his type of farm. Lambing is in three phases. The first group is about 300 Texel cross Lleyn ewes put to the Beltex tup lambing over three weeks in February and being housed until weather conditions are suitable for turn out. These are followed by 1,100 pure Lleyn ewes, of which 500 are bred pure and the remainder put to Texel tups. These lamb under cover from the end of March.

The final group are 500 Texel cross Lleyn ewes put to Beltex tups and lambing in April.   The pattern is structured to make best use of the new shed, and to provide a steady supply of finished lamb throughout the year. Beltex cross lambs are sold through Carlisle auction and any surplus Lleyn tup lambs go direct to Welsh Country Foods on Anglesey .

“We aim to finish the Beltex cross lambs at 40 kg to 42 kg liveweight and have found that, on our system, it is not worth trying to put on another 3 kg to hit 45 kg. The live auction system works well for us, and, overall, gives us better prices than if we sold on a deadweight basis. We also feel that it better, if possible, to sell lamb for 12 months of the year rather than for half the year. Before, we were selling mainly from August to January.

“Sheep farming has been through a difficult period, and the coming years will not be easy, but with fewer people in sheep production, both in this country and overseas, and increasing world demand for lamb, we think that the long term future is reasonably buoyant,” said Rob.