Easycare has become the buzzword in all livestock sectors and what could be easier managed and, just as importantly, produce healthy profit margins than a May-lambing organic Lleyn flock?  That's the conclusion Robert Lee, who farms 1100acres with his wife Sally at Lumbylaw, Northumberland, has come to. Having experimented with various breeds and crosses, not to mention lambing dates over the past 15 years, it's this system that the couple believes will enable them to survive a future.  "May-lambing Lleyns are more profitable because they don't have the input costs," explained Robert.

"They are easier lambed, produce higher lambing percentages and the lambs can be finished off clover pastures to weights of up to 18-19kg deadweight.  "Lleyns are not hungry animals, they eat nothing compared to a Mule and they're good mothers with plenty of milk. Our Lleyns are left very much to themselves at lambing time and although we don't generally get threes because we lamb in May, they will rear triplets," added Robert.

When the Lees first moved to Lumbylaw - from a 1000-acre beef and arable unit in Bedfordshire some 15 years ago - they bought Mule gimmers to lamb to a Suffolk inside in March. However, having had little if any experience of sheep before, Robert soon discovered to his dismay, that inside lambing was extremely demanding.  Lambing in March required large amounts of additional feed and more importantly labour, not only to lamb ewes day and night, but also to keep on top of potential disease problems. Not surprisingly, the business soon experimented with other lambing dates and breeds.  At that time, his Mule ewes crossed to a Suffolk would often produce scanned lambing percentages of up to 175, while lambed in May, the same flock could yield production figures of up to 160.

In a bid to reduce lambing problems and improve the carcase conformation of the resultant progeny, 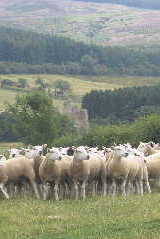 Robert then opted to try the Beltex over his May lambing Mules. This did not alter lambing percentage but it improved carcase quality, although the progeny were slightly slower growing than the Suffolk crosses.  It wasn't until the couple fell in with the Nelless family - Henry, Duncan and Angus - from Thistleyhaugh, Morpeth, that they were persuaded to experiment with Lleyns. As a result Lumbylaw purchased 70-80 two-crop Lleyn ewes from Messrs Ellis in Wales in the year 2000 and within a year, both Robert and shepherd Brian English was converted to this Welsh breed.  Consequently, the business then looked to increase Lleyn numbers and acquired females from Brian Walling and David Bennett. As a result, the unit is now home to 880 ewes with 250 Lleyn ewes bred pure the remainder are crossed to a Beltex to produce finished lamb for the butchers market.  "Beltex cross Lleyn lambs produce better carcase grades than Mule crosses or pure Lleyns," said Robert.  "Our Beltex crosses produce E, U and R, carcases, whereas the majority of pure Lleyns will give you R but rarely O's grades."

Just as importantly, Robert has discovered the Lleyns are well suited to an organic system with the lambs performing particularly well on clover swards.  "We normally have about two-thirds of our lambs to sell as hoggs off silage and homegrown oats in February, but this year, having acquired the grazing of organic clover pasture in Berwick, we've only got a quarter of the usual number left."

However, it's the Lleyn ewes that Robert is most impressed with for his organic farming enterprise.  He added: "We don't have much available grazing here until May when the clover kicks in, so lambing at this time is ideal. Lleyns don't have an appetite - the only feed they have is access to feed blocks pre-tupping I'm not convinced they make any real difference.  "We don't get big lambs because the ewes are not fed, we also don't get disease problems because none of the sheep are brought inside. 99% of ewes lamb on their own, but if one has to be twinned on, it's done in a pen in the field." And, with no sheep lambed inside, labour and veterinary costs are also kept to a minimum. Since the farm turned organic in 2002 the business has omitted all clostridial vaccines, scratching for orf and regular worm drenching. Instead, the sheep are set-stocked and farmed on a clean-grazing policy, which has reduced the need for worming significantly.

One year, half the farm is run with sheep while the remainder is kept for cattle. The following year, the cattle and sheep enterprises are swapped round. Admittedly, faecal egg counts are still collected periodically throughout the year, but worm drenching is lower than grazing the sheep in the same field's year on year.

Now, all ewes are regularly vaccinated with Dectomax for scab and bought in females are vaccinated against abortion. Robert has also discovered homeopathy, which he believes provides alternative remedies that complement conventional medicines. 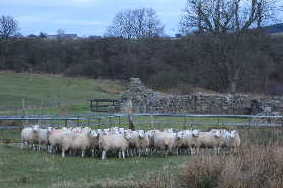 The aim now is to increase Lleyn ewe numbers further to enable a larger proportion of breeding females to be sold whilst also selling a few breeding tups.  But, while the Lleyns are undoubtedly performing well on the organic system, so too are the South Devon cattle, which the couple moved into Lumbylaw with.
In all, the farm is home to 100 South Devon cows plus youngstock with all the resultant progeny, outwith heifers retained as replacements, finished on farm at between 20 and 24months. The steers easily reach 700kgplus while the heifers often scale in excess of 600kg from a ration of homegrown pea silage, grass silage and homegrown oats. More impressively, they sell for in excess of 260p per kg deadweight for Sainsburys or Waitrose, while organic finished lambs often hit prices 10% more than the conventional trade.  "There is more money to be made farming organically but to go down the organic route, you have got to believe in the organic ethos. If you just do it for the conversion money, it may not work for you. It certainly isn't suitable for every farm or every type of farming system. A lot depends on the individual's ability to change existing practices.

Commenting on the future of organics Robert said: "The demand for organic produce has soared in recent years purely because the public is becoming increasingly aware of how their food is produced and how much better organic food is. People also have a lot more money to spend on food."  It is nevertheless, the easycare aspect of the Lleyn that particularly lends itself to organic production.  "Farmers have to cut their costs, and it is far easier to reduce costs of production with outdoor May lambing sheep enterprises compared to any cattle set-up. As soon as you bring any stock inside, it costs money. Therefore there has to be a very, very good future for the Lleyn," concluded Robert.