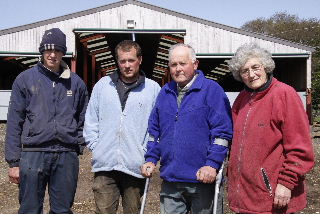 Prime lamb production based on pure Lleyn dams fits in well with running a high yielding pedigree Holstein herd on a farm in West Cumbria .Sheep are the best grassland tool you can have on a dairy farm. That is the simple philosophy of Cumbrian dairy farmer, Wilson Boow, and was the key factor leading to the establishment of a successful Lleyn based commercial sheep enterprise.

The Boow family have built a formidable reputation for the production and sale of pedigree Holstein heifers from their Dunnerdale Holstein herd and have also made a name for themselves selling top quality Lleyn bred prime lambs, mainly through Lancaster Farmers Mart.

The farming team is made up of Wilson; his wife and 'shepherdess', Doreen; son, Stephen; and part time worker, Michael Hoggarth - the son of a former neighbour. 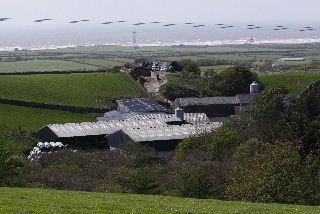 The land is all down to grass apart from 12 acres of winter wheat and 25 acres of spring barley grown for feeding to the dairy herd as whole crop. Short term ryegrass is drilled into the stubbles to give autumn grazing for finishing lambs and early spring grazing for ewes and lambs. The cereals are also used as an entry crop for reseeding grassland, which is mostly 5-7 years leys.

The core business is the Dunnerdale Holstein herd made up of about 140 milkers and around 150 followers. The herd calves all year round, currently averaging 11,850kg milk at 4.0 per cent fat and 3.17 per cent protein on twice daily milking. The herd also produces about 30-40 in-milk heifers for sale as breeding stock. For each of the eight months up to May 2009 heifer sales peaked at over 3,000gns. 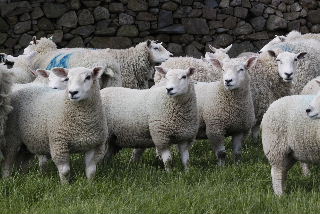 Sheep have always had a part to play in their farming system, their previous farm running a 40-50 strong dairy herd plus hefted flocks of Swaledale and Fell sheep. Some Swaledales, a Rouge tup, and some Rouge-Swaledale crosses were brought over to Corney Hall together with the Holstein dairy cattle. Â Stephen said: "We have always had sheep and have felt there is a good future for sheep. Apart from that we like having sheep on the farm and wanted to be able to breed our own replacements. There is also some land here that is not suited to cattle, and we also tend to use the land away from the main farm for sheep." Â Wilson said: "We started to buy in a few Lleyns the first year we came to Corney Hall. I liked what I had heard about the breed and decided to try some. We bought 20 gimmer hogs privately then I went to a breed sale on Anglesey and bought some Lleyn ewes and a tup. The Lleyns gradually took over from the Swales and now we are running about 350 Lleyn ewes and 50 gimmer hoggs.

"We put a few of our best Lleyn females to the Leyn tup to breed replacement breeding stock, and the 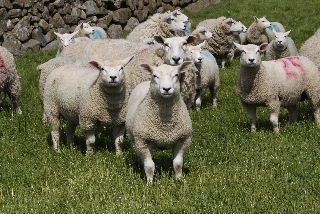 remainder go to Beltex cross Texel tups for prime lamb production. All our ewes are pregnancy scanned this season showing an average of about 200 per cent lambs per ewes tupped. Â Lleyn ewes with texel x Beltex lambs at foot"First 140 of the older ewes are put to the Beltex cross Texel tups for lambing from mid-January through to the first week in February. Then 140, mainly shearlings, are put to the Beltex cross Texel tups to lamb from the first week in March. Another 70 shearlings and two shears are put to the Lleyn. Â "Last year we tupped 302 ewes and 30 hoggs. The first crop of early lambs produced 227 lambs marketed over seven consecutive weeks averaging ÂŁ83.54 and 40kg weight. Overall last year we sold 505 lambs to average ÂŁ69.33 and retain 60 pure bred gimmer lambs for breeding. Â "This year our first lambs sold through Lancaster Market at the beginning of May saw 29 Beltex-Texel cross Lleyn lambs weighing 42-43kg selling from ÂŁ95 to ÂŁ99.50 per head. Our pure-bred Lleyn male lambs also finish well and bring good prices. We like to sell everything, both cattle and sheep, through the live auction. 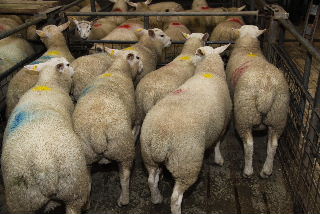 Texel x Beltex Prime lambs at Lancaster Auction Mart"With lambs, if you sell deadweight you are told what price you will have. Our aim, with both cattle and sheep, is to produce top quality livestock that, hopefully, will have bidders competing for them." Â "We lamb indoors and have a new lambing shed built with the help of a ÂŁ16,000 grant from the Cumbria Connect scheme. There were no plans for a new shed, but we felt that we could not afford to miss out on the scheme. The shed is used for implement and other storage when not being used by the sheep. Â "Depending on weather conditions, the early lambing sheep will stay indoors for up to a month before being put out to grass. Feeding is on a a total mixed ration system using grass silage, straw, molasses and a special protein meal. Once outside the ewes will be given a few rolls, with the lambs offered a creep feed as well."

Lleyn cross lambs"The early lambing ewes make use of the heifer grazing, with this later taken over by the 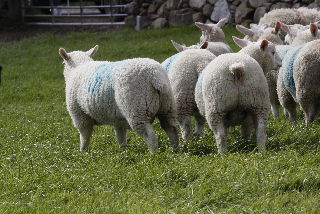 heifers. The sheep move on to make use of land unsuited to cattle grazing including grass away from the main farm, The grazing situation is also eased in that the dairy herd is kept in overnight throughout the grazing season. In winter sheep are used to clean up the pastures while the cattle are housed," said Wilson . Â "Sheep numbers have been built up over the past five years and, we think, are about at their maximum. The Beltex cross Texel ram works well on the Lleyn ewe. We look for strong ewes with strong loins and tight skins then look to the Beltex cross Texel tup to put the conformation and good quality rump on to the lambs.

Lleyn ewes with Lleyn lambs"The Lleyn ewe lambs easily with very few needing assistance. It also offers longevity - we have a few eight-year-old ewes still in the flock. All pure bred Lleyn females are retained for breeding but we have no plans to start selling pedigree Lleyn breeding stock. We have also found the Lleyn breed particularly good to work with. 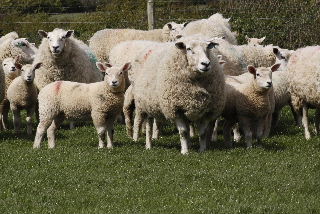 "One thing is certain. My father's advice that sheep and dairy cattle work well together is certainly true and that, in our own situation, the Lleyn has really proved its worth as a commercial dam breed," said Stephen.