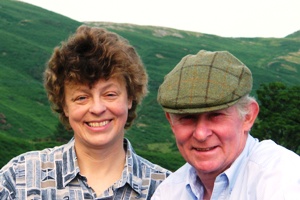 Eighteen years ago Brian and Janet Hill moved to the Isle of Bute from Somerset to take on the tenancy of Plan Farm, a 1600 traditional hill farm running 1000 Blackface ewes. Janet had the particular interest in the sheep enterprise, but little experience of hill farming but enjoyed the early years at Plan Farm under the mentorship of shepherd John Baker. Janet juggled this whilst also being mum to young Edward and George who were just 4 and 6 at the time. Meanwhile Brian introduced his cattle to the hill and set about improving land, drainage and fencing, a job he is still doing 18 years later.

In the early days half of the ewes were bred pure to the Blackie with an in-bye flock being crossed to the Blue Faced Leicester. "I learnt valuable shepherding skills from John in those days and very soon developed a keen interest in the maternal side of the enterprise. To me it seemed obvious that we were playing a numbers game, and not giving ourselves enough time to identify inefficiencies and problem ewes" says Janet. So they set about thinking how they could reduce ewe numbers whilst keeping productivity up and altogether running an entirely more efficient system. Being a closed flock, she wanted to find a breed that would produce ewe lamb replacements without having to go through the two-tier system associated with mule breeding, and a breed that was more prolific and had a better wether lamb so that more lambs could go away finished rather than store.

Having read about the Lleyn, Janet went to visit Debbie and Neil McGowan Flock 894 to find out more, and 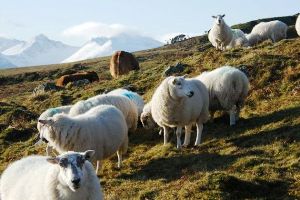 she was impressed. So impressed that she ended up buying twenty registered ewes privately from a flock dispersal in Wales, and got bitten by the pedigree bug. Several years were spent turning out ewe lambs for Society sales which Janet described as fun, but the Lleyn was at Plan Farm to do a job. That job was to make its mark on the commercial success of the sheep enterprise.

In 2004 they began to cross the Lleyn over the Blackface ewes and started using electronic tags to record performance. She set out to identify which ewes could produce two lambs outside, unassisted and rear them to a total weight at weaning equal to her own body weight. Once the half-bred ewes were in production, then differences were noticed. "The first year that the gimmers lambed I knew we were on to a winner. They were in lamb to a Meatlinc tup for easy lambing, so they popped their lambs out with ease and went on to be great mothers. Causing me absolutely no work at this busy time of year" comments Janet. From then on the top performing half-bred ewes were all put back to the Lleyn with the lower half going to the Meatlinc or New Zealand Suffolk. Ease of lambing continued and prolificacy rose and today the Plan Farm flock is made up almost entirely of three quarter plus Lleyn ewes. Some females off the Meatlinc have been kept and they too are performing well, and just 13 old timers with horns will lamb at Plan Farm for the last time in 2012.

The Lleyn ewes live outside all year on grass. They are gathered in February for scanning, trace element supplementation and fluke drench and returned to the hill until just two weeks before lambing. This is the only time of year when they receive any extra nutrition. For the eight weeks up to lambing the predominantly twin-bearing flock receive 0.5kg cake (made to a special of 15% soya for the last load before lambing), Lifeline buckets and silage. For an equivalent diet offered to the Blackies, the Lleyn ewe produces more milk and more lambs. Not only this but she holds her own condition, keeps her teeth and lives longer. 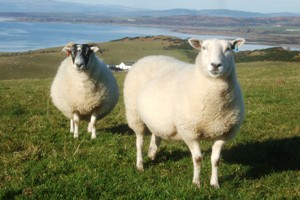 It is not only the females that Janet has been seeking to improve efficiency, but ram performance too has been under scrutiny. Although not breeding her own rams yet, Janet sources high performance rams which are fit. In the early days 1:40 was the accepted ratio of rams to ewes. These days using the Lleyn which has not been pushed and over-fed for the sale ring, the rams at Plan Farm are happy to serve eighty ewes as a minimum. They only get one chance to succeed with tupping time kept to a strict three weeks. The Lleyn has no difficulty in achieving this, and the statistics show that they are more than capable of handling this work load, with just 1% geld ewes the norm now.

Making such progress has brought huge rewards in terms of financial performance of the enterprise, but also in what Janet feels she has achieved personally. However, she is not completely satisfied yet. There is still a desire and ambition to return to a pedigree flock which can be run alongside the commercial flock The aim of this would be to start producing homebred rams and take breeding stock out to the Society Sales once more.