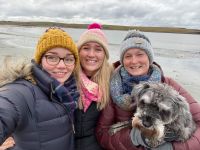 Colin & Pamela Davidson farm 1000 acres on Orkney in the North of Scotland with 230 Lleyn Ewes and 230 Suckler Cattle which includes 100 Pedigree Aberdeen Angus.  The Davidson Family have been at Skaill Farm for 75 years.  Pam takes control of the sheep while husband Colin oversees the cattle.  Colins father Stewart works alongside them plus a full-time employee.

The Davidsons joined the Society back in 2006.  They had previously run North Country Cheviot Park Type but lambing problems and low prolificacy forced the need for change.  After much research and a chance encounter with Di Lewis, the decision was made to purchase Lleyn Ewes.   The foundation stock were sourced from Lionel Organ and Richard Twose. 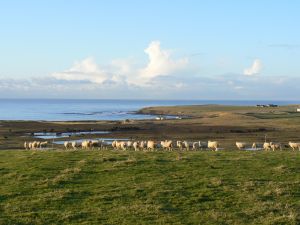 The initial plan was to put the Suffolk and Texel over the Lleyn but the pure bred Lleyn lambs were killing out at only £1 below the crossbreds, “so we decided not to give ourselves more hassle with lambing” Pam comments.

The farm is made up of 600 acres of good grassland pasture and land suitable for the plough.  The other 400 acres is coastal heath and hill grazing.  The winters tend to be long and wet hence seven months of winter keep is needed.  Although the low lying, 200ft coastal location is beautiful, the new grass can get damaged by the salt spray.  The sheep are great at following the cattle and tidying up, helping with weed control.

Primarily the ewe lambs are kept for replacements with the surplus sold as shearling ewes through Society sales.  All male lambs are sold deadweight to Kepak or Woodheads.

Lambing takes place from approximately the 20th April, as it is hoped the weather will be improving and grass will have begun to grow.  The Davidson have two daughters, Anna & Erin who work and live in Glasgow and Edinburgh.  They are always keen to return to Skaill Farm to help with lambing time, taking holidays from city life and bringing enthusiastic friends who also enjoy mucking in.  Their son, John is a vet on the Island. 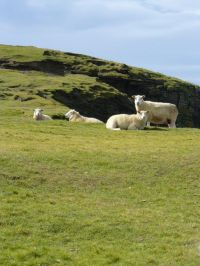 All sheep are outwintered, only fed silage with a TMR mix added shortly prior to lambing.  Lambing takes place outdoors only brought into the shed for a short period before being moved to fresh grass.

The Davidsons have recently taken the decision to make their flock Maedi Visna Accredited (MVA).  Pam noted that previously she had taken sheep to the sales, being non MVA meant they had to be penned away from the majority of the sale and often sold through another ring.  “By becoming MVA we are now part of the main sale penning area sold through the busier ring.  I also wanted to see how our sheep stood up against other breeders, possibly with a view to selling tups and/or competing at shows.  As a vet, our son John, also encouraged this move.  Although the initial outlay was costly, I have no regrets as when selling gimmers in Stirling in 2019 we received £195 (and third prize pen) and £180, and £160 at Carlisle.  We were not even getting close to these prices before becoming accredited” says Pam.

Looking to the future they will continue to emphasis on low input breeding of the Lleyn as this fits with the Aberdeen Angus ethos.

Pam summarises that she feels some breeds are seeing high levels of assisted lambings which is filtering down into the commercial flocks.  Pam believes that the Lleyn is able to avoid this with higher survival rates and increased lambing percentages.  The Lleyn ewe has also proved to have a great mothering ability able to thrive at Skaill Farm. 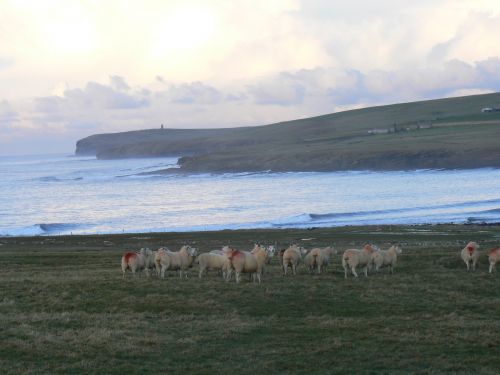