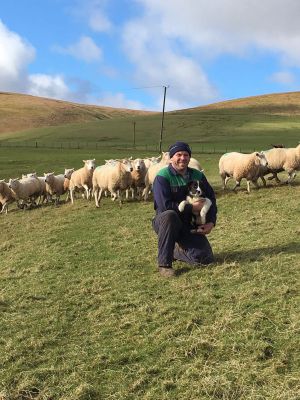 Willie Aiken and his father John farm at Carlophill Farm.  They have 1000 acres from 900 – 1700ft, ranging from wet heather hills down to peat and clay fields which are better suited to a dry summer.  “We get a lot of rain in this part of the world” states Willie.  They farm 930 Lleyn and Lleyn cross ewes which are all put to the Lleyn ram for early April lambing as part of this commercial system.  Alongside the sheep they farm 190 Saler cows.  Willie states that he wants a life. Therefore the livestock have to work around him so that he can have a life at the weekends.

The family ventured into Lleyn after attending the NSA Scot Sheep event which was held at Poledean Farm back in 2004.  Moving in to the Lleyn has enabled the business to produce higher numbers with a lower input.  The lambs are slighter later finishing so we work to benefit from the later trade which is often improved. “I wanted a breed that did not require a high number of man hours but would have good longevity with high milk yields, good lambing percentages but most importantly put money in my back pocket!” says Willie.

The present flock is made up of 700 pure bred Lleyn and 230 Lleyn cross Meatlink or Suffolk ewes.  They venture to the sales every year to purchase their rams which are selected on eye and breed knowledge whilst paying ‘middle of the road’ prices.  Female replacements are all produced on farm.  The April lambing suits the lambing staff, whilst also working with the grass growth in the area. 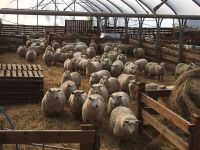 Ewes are fed a good quality nut with the snacker at the start of the year.  When ground conditions get too wet they will be moved inside.  Willie comments “We currently have two large poly tunnels carrying 450 ewes each which is a blessing!  Life in the poly tunnels is great, nice and healthy whilst dry.  My lambing staff love it in their shorts and t-shirts.”

Any lamb not selected as a breeding replacement is sent to slaughter.  All lambs go deadweight to one buyer who comes on farm and selects his own lambs.  “Nice and simple!” Willie.  The lambs are finishing mostly at 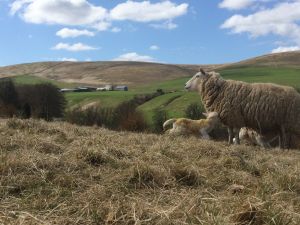 “The future of the industry is an unknown, I for one hope it picks up and moves forward on a positive step.  The Lleyn breed is definitely here to stay -It’s a cracking breed.  Yes there is a variation which can be seen in the tups.  At the end of the day it is up to the producer to select the sheep that suit them.  If you are looking for a breed of ewe that covers both hill and lowland ground, this is the ideal choice” Willie.