Fickle hand of fate makes transition to Lleyns much smoother 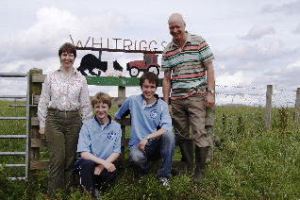 Mitchell Family from Whitriggs, Falling demand for Suffolk cross lambs out of their Scotch Half-Bred flock left a Borders farming family with no choice but to look at other options. A brief encounter with the Lleyn breed took their farming in a new direction as Neil Ryder found out.

Coincidence brought the Lleyn breed and the Mitchells, a Borders farming family together, fulfilling their need for an easy to manage sheep that combined the ability to produce good quality meat lambs and to produce good females for breeding flock replacements.

The arrival of Lleyns on their 442ha (1,086 acre) upland farm was totally unplanned. It was 2002 and changes in farm support plus a shift in the market had brought a dramatic drop in demand for Suffolk sired lambs out of their Scotch Half-bred flock. There was no choice but to look for alternatives.
The obvious choice was the Mule, but Robert and Lesley Mitchell of Whitriggs, Hawick, wanted to move away from having to buy in replacements. It was at this point that a local farmer was emigrating and selling off the farm's flock.

The Mitchells decided to buy a pen of their Lleyn ewe lambs, were pleased with their buy and 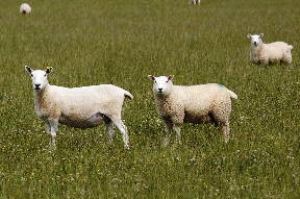 went on to travel down to the Lleyn Sheep Society sale in Ruthin taking home 100 ewe lambs, returning the following year to buy another 150. The Lleyns are run as purely unregistered, commercial animals and there are no plans to move on to pedigree breeding.

The Mitchell family came to Whitriggs in 1946, adding the adjoining Denholm Hill Farm in 1999, effectively doubling the size of the holding. The farm runs from 137m (450ft) to 427m (1,400ft) above sea level with soils ranging from heavy and wet at the bottom to lighter, free draining soil on the upper land. About a quarter of the farm is rough grazing, the rest being 'ploughable'.

The heavy nature of the ground, together with a relatively high rainfall means that all stock - both cattle and sheep - are housed over the winter period. 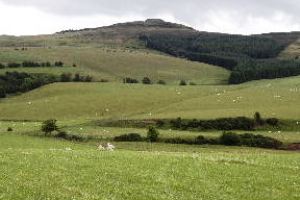 This 'ploughable' land is largely medium to long term high clover leys in rotation with 49ha (120 acres) of Westminster spring barley and Alchemy winter wheat, both grown for home feeding.

Whitriggs Cows, the cattle enterprise is based on about 140 spring calving suckler cows. Apart from a few pure Beef Shorthorns, these are a mix of Shorthorn and Aberdeen-Angus crosses produced as the result of a criss-cross breeding system. Â All male calves are finished at around 21 months of age weighing about 550kg-600kg, with finished heifers about 500kg. Apart from a few Aberdeen-Angus sired animals sold on a deadweight basis to Scotbeef to collect the Certified Aberdeen-Angus premium, these are sold through the local St Boswells livestock market.

Heifers are also being retained as suckler herd replacements and to build up herd numbers, while a few 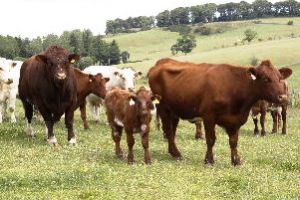 surplus heifers may also be sold as breeding animals. Â

Up until 2002 the sheep enterprise was based on Scotch Half-breds with about 300 ewe lambs being bought in each year. These were put mostly to Suffolk tups.Â Changes in farm support saw a decline in the demand for the Suffolk Cross ewe lamb out of the Scotch Half-bred leaving the Mitchells with no choice but to look for an alternative. Â "We bought in the Lleyns, and started putting Lleyn tups on our Scotch Half-bred ewes. Now we have about 900 breeding ewes of which about half are unregistered Lleyn and the rest Lleyn cross Scotch Half-breds. Many of these are now almost pure Lleyn blood.

"All our sheep are in-wintered from about Mid-January to early April. We start lambing from about March 20 th , with the ewes going out after lambing as long as weather conditions are good. Â "We feed a silage based diet. Our plans are to make high quality silage to be able to feed silage only, apart from a little protein supplement in the three weeks before lambing," said Robert. Â "The ewes are pregnancy scanned in New Year and we expect a scan of about 185 per cent lambs per ewe tupped and look for about 160 per cent lambs reared. We want to keep prolificacy down a little for ease of management. Too many triplets and quads cause extra work and is harder on the ewe. Â "While the pure Lleyn is a good terminal meat sire, we are also looking at Texel and Texel cross Beltex tups. The Suffolk tends to give a fairly big lamb which takes more out of the ewe as she lambs and can require more attention. 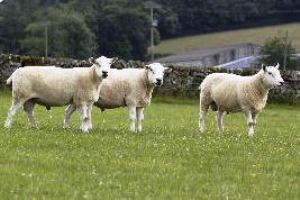 "We are also selecting out some of the Lleyn ewes that we like and suit our system to build a small nucleus flock for breeding replacements. Milkiness and mothering ability is important to us and we keep the ewe lambs from the ewes showing these traits. One character we are looking for in our lambs is tight skins - one of the first things the butcher looks for in the sale ring."

"The first lambs go away off their mothers in July, with lamb sales then running through to about Christmas. All are sold live through St Boswells and are typically about 40kg-42kg liveweight," he said.
Lesley added: "We like the live auction system as this sets prices in the marketplace. It also means that we know that any of our lambs that go away are what the market wants, also St Boswells is local so we can be with our lambs when they are being sold."

Robert said: "Our system for both cattle and sheep has to be easy to manage. When we had the Scotch Half-breds up to 2002 there was Lesley, myself and two full time employees on the farm. Since then there has been just the family and, just recently, a student - a school leaver taking a gap year to gain experience and earn some money before going to SAC this autumn.

Lleyn ewe and 2 lambsLooking forward, he said: "We have two sons, 16-year-old Stuart who has just left 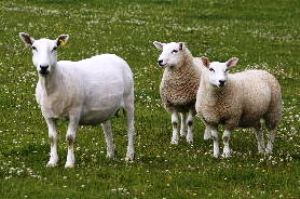 school and is working on the farm for a year before going to study Agriculture at SAC, Edinburgh and Alistair, 14, who helps on the farm when he can. Alistair has some time left at school and plans to study Animal Sciences at college or university.

"It will be up to them to decide whether they want to join the farm business or to follow careers elsewhere.
"Ease of management will be important for us. The next change will be the need for EID, electronic identification. There is no doubt that this is coming, and I think that we can use this to improve our management and help us breed better sheep.

"There will also be a need to try out different terminal sires to find which suits us best, while keeping things as simple as possible. We will need to be able to breed our own replacements and may have a few breeding females to sell but these will be as unregistered, commercial animals. There are no plans to breed pedigree stock. 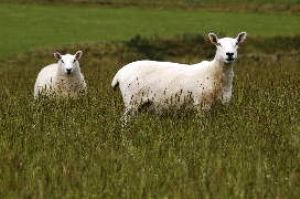 Lleyn Ewe"One thing I think our experience has shown is that the Lleyn is an extremely flexible breed in the way that that we have been able to introduce the breed without displacing our existing breed, the Scotch Half-bred. Yes, the Lleyn will eventually replace our Scotch Half-breds, but this is being done gradually without any major disruption to our farming system and minimising the risks of bringing in diseases with bought in sheep.

"In our case the change is very much one of evolution, rather than revolution and, for us at least, the Lleyn has provided just the evolutionary route we need."