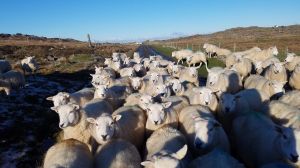 Rob Wainwright, a former rugby union captain for Scotland retired from the sport in 1999 when he and his wife Romayne with their four children bought a farm on the Isle of Coll.

Coll is a small Hebridean island situated well off-shore from Mull.  The island enjoys a relatively mild climate, influenced by the Gulf Stream with frost and snow a rarity.  However, the bracing Atlantic Wind does play its part.  The island has a permanent population of about 200 residents, with an economy based mainly on tourism, fishing and farming.

When the family initially moved to the farm, which is a mixture of poorer hill and the much more productive machair and dunes, they took over Blackface and Hebridean ewes, which were quickly crossed to Lairg type Cheviots to produce a marketable lamb.  Rob then started to note articles about the Lleyn and her maternal abilities and improved carcase qualities with commercially useful prolificacy rates.  Due to location and logistics all lambs are sold off the farm as stores in early August through UA Stirling.  Rob has now been crossing the Lleyn ram onto the Cheviot ewes for many years, keeping the females crosses as replacements, this now means the majority of the flock are Cheviot x Lleyn with increasing levels of Lleyn.  He runs approximately 450 ewes in total with half put to the Texel and Texel x Charollais and the remainder put back to the Lleyn.

Rob has purchased registered rams for a number of years.  Although he limits performance recording in his flock to annual output per ewe, he does take into account the EBV figures when purchasing a ram.  He wants the rams to possess the good maternal attributes for the female replacements, opting for lower end maternal weights for efficiency in the challenging Hebridean conditions, whilst also putting some shape into the lambs which are being sold as stores for further finishing to repeat customers.

Lambing time takes place at Cliad indoors from 1st April, before the ewes and lambs are put out onto the inbye spring grass “if the geese have left us any!”. From there they move to the hill as the summer unfolds.  Generally the flock scans at about 130%, and the ewes are fed East Coast Viners 18% ewe rolls from scanning in late January onwards to lambing.

Alongside the sheep there are 90 Luing-type cattle on the farm which are used to produce Sim-Luing cattle which are sold as stores and/or suckler breeding females through United Auctions at the Oban sales in October and December.

Rob is very happy with the results his Lleyn cross females are giving him but he is wary that as he takes the Cheviot out that he may remove some of the hardiness of his flock.  Hence, he has been keeping some of the Hebridean Sheep characteristics in the flock. As a hardy, thrifty and prolific breed they may produce a tasty meat but do not produce a commercial carcase, whereas the Lleyn does produce a commercially suited carcase so Rob is hoping that by combining them he can produce what he needs for his system and the market.  Rob comments “the Lleyn is a great white-faced breed that produces what we need in both our female replacements and our stores for sale”.