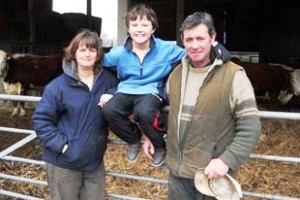 Despite not having any farming in their blood, Adam and Amanda Cheesmur were absolutely determined to have a proper, commercially-viable farm. That they succeeded in less than 10 years, starting from scratch, is a tribute to their resolve.

For most of those 10 years, the core of their farm was 60 acres and buildings at Lindfield, West Sussex , held on a FBT. Keeping an eagle eye open for local land, they managed to add other blocks one by one and, 18 months ago, they made a massive step forward, moving onto Bush Farm in Chailey, East Sussex , which has 120 acres and buildings. For the first time they actually live on one of the farms they rent. The Cheesmurs now have 6 blocks of permanent pasture totalling 320 acres, ranging from heavy clay to sandier loam, principally over sandstone. Most is low lying, only rising to about 90 metres. It isn't the easiest land. ' It's really wet when it's wet and bone dry when it's dry ' says Adam. Rainfall is normally between 2 and 5 inches a month but, in 2010 and 2011, there was less than 1 inch in total in the April - June period - a real problem.

Adam is evangelical about reseeding with grass and clover mixes and has improved over 100 acres. Usage of fertiliser is very limited, being restricted to some old pasture cut for hay. The clover does the rest, with some manure from the cattle. Hindsight is a wonderfuI thing. Adam summarised: ' If I had known when we started how valuable the new clover leys would be, I would have improved the grass before getting the livestock. But, without the stock, we wouldn't have been earning anything, so I suppose that it was a vicious circle.'

Adam's interest in farming was stimulated at his secondary school which had a small farm unit. Some years later, he spent two years in New Zealand and Australia working with sheep and cattle and, basically, ' learned that livestock should look after you and not the other way around '. He met Amanda on his return to the UK and they married soon after. Amanda is ' better at the clerical side of the business and does nearly all of the records' .

While in NZ, Adam realised that the sheep were similar to the Lleyn he had seen when working on a pig

unit back home. On his return to the UK , he wanted to start his own flock whilst still working on a dairy farm and needed sheep that would be easy to manage in his spare time. He chose Lleyn and bought ewe lambs and a ram from Ross in 1999 but also bought some Suffolk X Mules locally. ' It quickly became clear that the Lleyn had nowhere near the appetite of the Suffolk X Mules but had as many lambs and reared them just as well.

The ewe lambs (from flocks 940 and 999) lasted extremely well, with the final few only being culled last year. The ram (from flock 123) was equally good and went on for 10 years. The other significant purchase was some 2002-born ewes from flock 302 (via Mary and Willis Cramp); they are just being culled now. Almost all of the flock is now home bred, put to stock rams from flocks 123, 380, 401, 847 and two home bred rams, one by the original 123 tup and another by the 401 ram out of a ewe sired by a 699 tup.
The Autumn 2011 tupping plan involved putting 220 pedigree Lleyn to Lleyn rams and smaller numbers to a Bluefaced Leicester (30 Lleyn; 50 Beulah) and 20 Beulah to a Beulah ram, ie a total of 320. ' The main reason for the Beulah ewes is that, when we needed to increase the flock rapidly, Lleyn were dear and Beulahs were cheap. We probably should have replaced them with Lleyn by now but people around here still like the Mule so we breed some of those too .'

'I have crossed several terminal sires onto the Lleyn - Southdown, Hampshire Down, Charollais and a few by accident to a landlord's Suffolk and, although the majority were good lambs, I found most were higher maintenance than pure Lleyn, ie. they needed crutching more often; their fleeces were tighter and more prone to fly and, if they didn't finish straight off the ewes, then they went very store-like after weaning .'
The Cheesmurs lamb outdoors in April, an approach they edged towards, step by step. 10 years ago they had no cattle and lambed indoors - 200 in February and 200 in April. ' I dread to think how much was spent on concentrates and straw and, if there wasn't much grass about, the feeding went on and on and the early lambs ended up no bigger than the April ones because the ewes hadn't had the grass .' The first step was to reduce the number of ewes to 300, with singles lambing out and the others being fed and lambing inside. The next stage was to lamb all the ewes outdoors but still feed multiples until lambing started. ' Now, with the improved leys, we have cut out the concentrates altogether apart from ewes rearing triplets or more. These get a bit (but not more than 1/4 kg) and that stops when lambing starts and only fostering is done in pens indoors . Lambs are tagged and rung on day two and everything is much healthier for being outside, even when we have had snow in April. We lose some to foxes and badgers but there are hardly any mal-presentations, no watery mouth, little mis-mothering and far less lameness. I would never go back to indoor lambing .'

Lambs are weaned in early August and the first draw is taken then. Some pedigree Lleyn ewe lambs are sold at Exeter Society Sale, along with 1 or 2 rams and up to 40 shearling ewes. The other 200 ewe lambs go off to winter keep locally. The bottom end is dropped off in December. About 100 of the Lleyn ewe lambs are registered and they and the Beulah and Welsh Mule ewe lambs are run on.

Wethers are stored at home and are sold live in January and February, either fat or as stores. As more grass is improved, more lambs go fat. ' Apart from a few we sell in boxes, our sheep are sold live through South East Marts at Hailsham. I like selling live. I can see what`s going on and decide whether to sell or not. I can compare my lambs with other breeds on the day, keep my ear to the ground and get to know people. When you're a tenant farmer, it's not always what you know that brings the opportunities, it's who you know and being in the right place at the right time.'

Ewes are tupped at home in individual ram groups and then go onto keep in December until the end of February. ' We have scanned at 170% for a couple of years now. I think the ewes have worked hard over the last couple of years when it has been so dry in the Spring. We are trying to run the flock in a natural (minimal intervention) way and I am sure some years will be better .'

To complement the sheep, the Cheesmurs wanted some cattle which would thrive (like Lleyn) on forage alone. They chose Herefords and now have 26 cows and their followers, ie around 50 cattle. All fodder is home grown, with straw bought in. Heifers are retained to expand the herd and steers are sold fat or as stores. They also have 3 Hampshire x sows and a pure Hampshire boar. Most of the offspring are sold as weaners at 8 weeks and Adam and Amanda make the others into sausage 4 times a year, selling to a growing and loyal group of local customers, along with 20 or so lambs and 1 or 2 fat steers.

Despite their fierce commercial focus, the Cheesmurs are keen showers of Lleyn in the south east and, since 2005, have had several breed champions. Their son Peter (aged 8 - many will have seen him climbing all over the place at various Society Sales) is getting into showing in a serious way and has had some success in young handler classes.

Thinking about this article made Adam sum up the benefits of Lleyn for him:
Â· Their temperament is excellent - they follow their lambs!
Â· They forage all year more or less without extra feed. This is important. ' 4 tonnes of
concentrates cost over ÂŁ800 which would last 3 weeks indoors but, for the same money, I can re-seed 8 acres which will last at least 5 years .'
Â· The lambs store without supplement, holding their condition, allowing sale when the price is right.
Â· They have the added benefit that pedigree stock can be sold from what are basically commercial sheep.
He also stressed that: ' I believe the aesthetic characteristics are as important as conformation, so that we keep the breed as pure as possible. Sheep that have not been true to type have generally not been so successful for us '.

What does the future hold? 'Lleyn sheep are definitely a big part of our future. The Beulahs will most likely go one day and I would like to have more cattle but keep the flock the same size (which is what I can manage on my own). The sheep trade is good now and, with the Lleyn needing lower inputs at a time when concentrates and fertilisers (which other breeds so rely on) are going up in price, then there must be a good future for Lleyn breeders. One day we might get a tenancy with everything on one farm which would be ideal, but those sort of farms don't come up around here, where a farmhouse is more likely to be owned by a commuter than a farmer, and barns are more likely to be caravan storage or car body shops than cow sheds.

Warning: Invalid argument supplied for foreach() in /var/www/vhosts/beck.yorserve.co.uk/lleynsheep.com/packages/tweetcrete/models/tweetcrete_user_timeline.php on line 47