Alan and Karen Stephens - Lleyns in the Cornwall 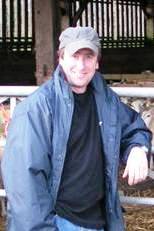 It must have been fate. It was meant to happen.’ How else to explain how things worked out so well? Just when Alan had decided that the Lleyn was the way to go, a promotional copy of the Farmers Guardian landed on his door mat, and there was an advert for 200 Lleyn sheep and their (350) lambs.

Alan had milked his 60 pedigree Holstein cows for years (20 of which graded Excellent/ VG at the point of sale) and reared followers, but decided in 2000 to give up dairying. It was proving difficult to find relief milkers and the 24/7 nature of the job was becoming increasingly stressful. He decided that he would sell his quota, go into sheep and supplement his income by doing some relief milking himself.

Once the decision was made, Alan and Karen put their minds to deciding what sort of sheep to buy. Over the next 2 years, they attended many Open Days, including Sheep SW, and decided they wanted medium-sized sheep, easy to handle. The Lleyn message - milky, prolific, easy to keep - went down very well. The fact that the Stephens liked the look of them too did help in the decision making!

Alan and Karen had decided to start small, buying 50 sheep at first. But then the advert arrived. The sheep had come originally from Flock 703 (Lightfoot, N Wales) but were now based in Cumbria. Everything happened in a flash. The cows were sold (with some emotion) on a Wednesday in June 2004. On Friday, Alan and Karen set out on their long trek to Cumbria to see the sheep. Things started well. The B&B proprietors knew the owner of the sheep and gave a ‘thumbs up’. The sheep themselves looked good and the Stephens bought them on the spot. They arrived in Cornwall the following Wednesday.

Initially, the sheep were rather suspicious of the change of scenery and owner, but they settled down very 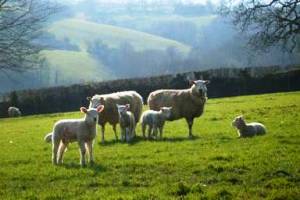 quickly. Longridge farm extends to 50 hectares, about 400-500 feet above sea level, with thin soil over shillet. Lying, as it does, on a ‘hogsback’, the farm is relatively exposed, but is very suitable for sheep.

By Autumn 2007, the closed flock consisted of 423 ewes and 109 ewe lambs. This year the ewe lambs have been left un-tupped, though this hasn’t always been the case. It has depended on how well grown the ewe lambs were and Alan’s feeling that the growth of smaller ewe lambs can be stunted. Alan uses six pure-bred Lleyn rams (3 bought with the ewes and three bought at the Exeter Sale from Flocks 552, 787 and 1265) and three Meatlinc tups. The better ewes (type, condition and performance) are put to the Lleyn, while the rest go to the Meatlinc to improve lamb growth and conformation.

Longridge benefited from the buildings previously used for the milking herd, but new buildings have been erected in recent years so that the ewes can be housed from Christmas till they lamb at the end of February and into March. They are fed silage and also concentrates from 6 weeks before lambing. The rations are based on scanning results. This year the ewes which went to the Lleyn ram scanned at 196%. Feeding stops when the grass cover is sufficient (6 cm). 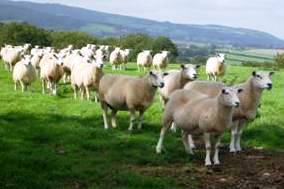 In the early days, Alan sent most of their lambs to the abattoir. The balance has shifted recently, though, as the stock has been improved, with more entering the breeding market. Most of the ram lambs are castrated but a few of the best are now reared and sold commercially to neighbours. The best ewe lambs are kept as flock replacements, or are sold to neighbours or at the Society Sale in Exeter. Fat lambs are sent to the local abattoir.

The first lambs are away at the end of May or beginning of June and batches are sold as they are ready from then till the end of the year. Alan has found the carcase quality remarkably good. Overall, in 2007, 97.5% of the lambs graded U and R with 95% being 3L or 2L. Average carcase weight was 19.4 kg.
Lleyn sheep handling. We were learning all this over a delicious lunch of stew, followed by homemade ice cream. However, all good things come to an end, so we had to brave the blustery January weather to see the ewes and rams. They looked well. The ewes are batched into singles, doubles, triples etc in different sheds. As much of the cattle infrastructure as possible is still being used: the feed silos and the sheds, and the old cubicles have been converted into lambing pens.

Longridge farmhouse dates back to the 17th Century and lies in the Lyhner Valley. Alan was born at 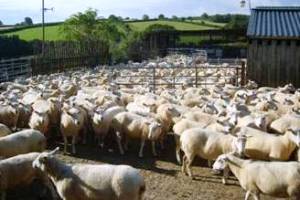 Longridge, while Karen came from the neighbouring Tamar Valley. They are one of the few families in Cornwall that haven’t converted every old stone building around the farmhouse into a holiday home. Alan and Karen delight in the views and the peace and quiet they enjoy. They have two children: Murray, who is doing a degree in Countryside Management at Duchy College, and Gemma, currently in the middle of her A level courses. Maybe one of them will continue the Stephens’ love of the countryside, the sheep and their way of life.