FLOCK 150 - ONE OF THE FIRST LLEYN FLOCKS OUTSIDE WALES 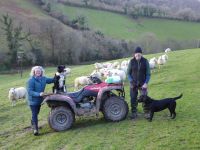 Back in 1981, Shirley & Ralph Evans had a small flock of pedigree Texels and another of Suffolks, which they ran on a smallholding in East Sussex. Five Lleyn ewes were purchased from Charles Wright (Flock 66) in order to breed them up to pure Texels. However, they were so impressed at the first lambing - the Lleyn were so easy to lamb, had more lambs per ewe and looked after the lambs well - that they immediately decided to have a flock of pure Lleyn.

So, at the Anglesey Society Sale in 1982, they purchased ewes from the best flocks of the time, ie John Eric Roberts (Flock 12), Tom Rees Roberts (Flock 43), Wynne Davies (Flock 50) and Vernon Jones (Flock 61).
Shirley and Ralph moved to a larger farm (200 acres) in Wadhurst, Sussex, where Cathy joined them. She had trained as a horticulturalist, working at Wisley RHS Garden for 2 years. She took a sabbatical year to help out on her parents’ farm and has stayed with farming ever since. One of their earliest memories was winning the championship in the ‘Any Other Breed’ class at the Kent show with a very nice Lleyn ewe with triplets at foot. At that time, they had, in addition to the registered Lleyn, a flock of Mules. However, the first year of lambing them was chaotic - 'we found them to be poor mothers, so after two years we sold them and replaced them with a commercial flock of 200 Lleyn put to terminal sires (Texel, Suffolk & Hampshire tups). Eventually, we had over 1000 sheep.'

1989 saw the family move to Oldaport Farm in South Devon. The farm is 80 acres in an Area of Outstanding Natural Beauty (AONB) and is of great archaeological interest, the farmhouse dating back to the 15th Century, while a part of the farm is an English Heritage site, being an historic fortification of Saxon or maybe even Roman origin. The farm is rather steep in places with mostly loam soil. Rainfall is around 34 inches.

The Evans' decided to give up their other breeds and focus on pure bred Lleyn with Flock 150 and, initially, Cathy's own small flock (Flock 387), though this was soon merged into Flock 150 when Cathy became a partner in the venture. She ran the flock together with Shirley for some time until Shirley had to semi-retire after a major back operation. In 2008, Shirley and Ralph finally retired and David, their son, and his family moved to Oldaport allowing David and Cathy to run the flock together.

The Evans' have a pedigree focus. Indeed, Flock 150 has won many Championships over the years at the Royal Show, Royal Bath & West, Devon County, Royal Cornwall Show, Kent County Show and many local shows. Both Shirley and Cathy are Lleyn Judges: before Shirley retired, she judged the Lleyn classes at both the Royal Show and the Royal Welsh Show.

'The flock is basically closed with no females being bought in. However, we do buy rams to ensure new bloodlines and avoid in-breeding. Our main stock ram at the moment is Tacho Force, purchased from WJ & DJ Williams (Flock 350) at Exeter Lleyn Society Sale in August 2017. He was top priced ram and took the overall Ram Championship at Exeter Pre-sale Show'.

The flock has been Signet recorded since its formation. Flock 150 was also a member of Lleyn Sheep Breeding Group based at Bangor University. The sheep were vetted by John Eric Roberts, Iorweth Williams and John Owen before they were passed to join, a big honour at the time. 'These days, to monitor and improve flock performance, we use LLEYN GOLD'.

The flock is usually around 50 - 60 ewes. Lambing (around 200%) usually takes place at the end of February and early March to take advantage of the (slightly unreliable) spring grass.  Ewe lambs are kept and, when shearlings, some are retained as flock replacements but the rest are sold through the Society Sales (mainly at Exeter) along with a small number of carefully selected registered rams. Most (castrated) ram lambs are sold to Jaspers at 40 kg minimum weight. In 2017, 14% were U, 86% R; 82% were 3L; 18% 3H. In addition, some meat lambs are sold to local pub/restaurants, where their quality and flavour are appreciated. 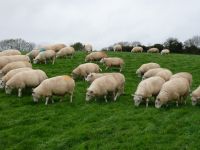 Come and see this significant flock in its beautiful home. ALL ARE WELCOME!
Phone 01548 830842 or email cathy@oldaport.com for more information.