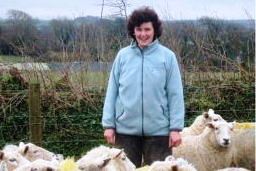 Jenny Starr (Flock 1454) was born and brought up at Lower Alsworthy farm, where her father was a tenant for over 40 years. Soon after leaving school, Jenny decided she wanted to farm; she joined her father and, over the years, has built herself a reputation as an excellent stocksman with a ‚Äògood eye‚Äô.

Lower Alsworthy is situated on the Devon / Cornwall border, near Upper Tamar Lake, an area of fairly high rainfall (45 inches a year) and strong winds. The farm has some wet, rushy pasture but the rest is relatively dry for the area. Nonetheless, the winters are rather wet and muddy and spring grass arrives late. The whole farm, which is just over 200 acres, is in the ELS Scheme, including 5 acres of culm grassland, 40 acres of rushy ground and traditional hay meadows with no inputs.

Not long ago Jenny had the opportunity to purchase the farm as a sitting tenant, which she now farms in her own right with some help from her father and her husband, Ashley (in his ‚Äòspare time‚Äô; he works all week for the Environment Agency). Man (or woman) power was further limited by the birth of their son, Corbin, in 2006 and, more recently, by having to oversee the design and construction of their new timber house, the final result of a 5 year long, tricky negotiation with the local planning people.

The farm carries 55 suckler cows, mostly Aberdeen Angus X, which are put to a Stabiliser bull, and 380 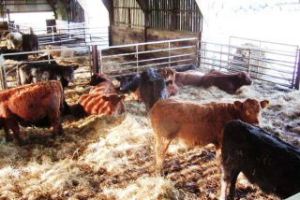 sheep. The system has to suit the local geology and weather and operate well with the limited manpower and buildings at Lower Alsworthy. To avoid poaching the land, the cattle calve indoors from 1st March, occupying the farm buildings, which pushed Jenny into lambing outdoors 6 years ago, an approach which fits with the low workload necessity anyway. In any case, earlier attempts (pre-Lleyn) to lamb indoors had been frustrated by feet problems and disease spread, including enzootic abortion.

Why did Jenny choose Lleyn? She had farmed Mules, which she regards as good sheep, but they were getting bigger and bigger, becoming harder to handle and needing relatively high feed inputs. She considered a variety of types of sheep but a ‚Äòmust‚Äô was to be able to breed pure, so that she could generate her own flock replacements, reducing replacement costs and minimising the threat of disease. The sheep also needed to be physically smaller than Mules, need less feed and be able to thrive on the limited grass at Lower Alsworthy and they had to perform well when out-wintered in this relatively harsh environment. Lleyn seemed to fit the bill and Jenny bought quality foundation stock (primarily from flocks 552 and 301) at the Society Sales at Exeter in 2003 and 2004.

The flock now consists of 80 registered Lleyn ewes and 300 cross-breds, the result of 1, 2 or 3 top crosses by Lleyn rams, mainly on Exmoor Mule ewes. Lower Alsworthy has a strong commercial focus on economic production of prime lamb. In the past, Meatlinc and Berrichon terminal sires have been used on part of the flock. This year she has invested in a high index Hampshire Down ram to increase finished weight and reduce finishing time.

The ewes go to the ram in late November and out-winter on the limited grass that is available, supplemented by hay and blocks. Lambing starts on 20th April, when weather and grass growth are suitable and the ewes need very little help. Prolificacy suits the system ‚Äì 186% (scanned) in 2008 and 180% in 2009. The lambs are weaned in early August and sold from August to February, mainly off grass, but supplemented in the winter with some concentrate. They average just under 19 kg and are mostly R3L.
Jenny is keen to keep her pedigree flock on the right lines and only the ewe lambs that meet her stringent criteria join the flock. The first selection is at birth: only those lambs born unassisted and which are vigorous and suckle soon after birth are considered. Singles or late lambs don‚Äôt make this cut. The second selection is at weaning. Lambs which pass are registered. They must have grown well, be physically sound and of good breed type.

What does Jenny think of her Lleyn? She is very enthusiastic. She is pleased with her home-bred ewes. The medium size is a plus point, as are the feet ‚Äì much better than other breeds in this challenging environment ‚Äì and the prolificacy is just right. They have ‚Äòdone what it says on the tin‚Äô. As the number of Lleyn and Lleyn X ewe lambs increases, she intends to be even more stringent in selecting future breeding stock, so that they meet her requirements but look more even. This will enable her to concentrate on other improvements to overall flock performance and the bottom line.

What of the future? Jenny wants to produce quality stock/meat and is doing her best to deal with the real, practical constraints at Lower Alsworthy (the land, the weather and the reality of very low labour availability). The focus on prime lamb production will stay, but keeping up the numbers of registered ewes does mean that she can keep her future marketing options open: there may be opportunities for selling ewe lambs or even rams at some point.

Jenny has been a member of the West Country Lleyn Sheep Breeders Club for some years and has kindly agreed to host an Open Day on 9th August. All are welcome.