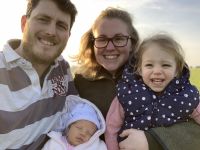 They farm on the edge of the South Downs where they run 520 Lleyn, 8 Hampshire, 40 Zwartbles & 25 suckler cattle.  The farm runs up to 420 meters above sea level with a very light loamy free draining soil, plus the below average rainfall makes for some very barren land at times with limited grass growth especially in dry/droughty times.

The first Lleyn ewes were bought in 2012.  Dominic notes “we thought a lot about what sheep to start our flock with and came to the Lleyn as we wanted sheep to suit our grassland which could live with little additional feed”.  The sheep are used to graze the HLS grassland of the chalk downland and the Lleyn has proved able to maintain itself and stay productive on this ground.  During the winter forage crops are worked into the rotation of the arable land for feeding the pregnant ewes and running replacement ewe lambs.

The Kilinkenbergs are members of the Performance Recorded Lleyn Breeders group and participate in the Signet Performance recording scheme.  “We record birth weights, eight week weights and weaning weights.  We also record muscle and fat depth with the aim of producing the best forage fed lambs to fit the abattoir spec”.  When buying their foundation stock, performance recording informtion was a preference hence they bought from the recorded flocks of Marcus Bullock, Ed Collins and Simon Thompson.  They were able to purchase large numbers of females from each flock.  These days they run a closed flock so do not buy in any females, all are bred within the flock with performance recorded data used as a tool to select these replacements.  Bethan noted that “when buying our rams we look for good breed characteristics alongside a good set of EBV’s and we like to be able to obtain as much breeding history the breeder can tell us”. 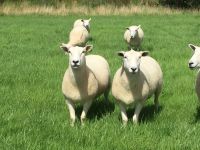 The poor grassland drives lambing to take place from the middle to end of March.  With a later grass growth season it is hoped by April the grass is ready for the ewes and lambs.  Everything is lambed inside for easy management but also to avoid the foxes and badgers.  Home-grown forage crop is fed to the ewes. They scan at 180-190%.

Of the females not kept for replacements, 250 are sold as registered yearlings every year through society sales and privately this is alongside 12 shearling rams.  The bottom 80-100 ewes are put to the Hampshire Down ram, “this has been a really great decision as this cross produces a fantastic fast growing prime lambs” says Dominic.

As with the whole industry things look uncertain.  The aim at Manor farm is to continue to improve the grassland and sheep to maximise their potential.  The overall aim is to produce Lleyn ewes that are 100% forage based whilst being high performing, able to produce fast growing lambs that hit the right spec as quickly as possible. 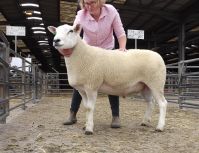 Bethan sums up with “The Lleyn is an ewe which we can both handle, she produces marketable lambs and she provides us with the additional option of selling replacements easily.  The Lleyn ticks all the boxes for us”. 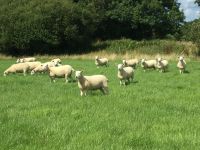