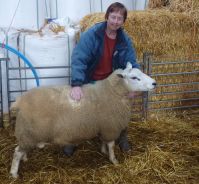 Michelle and Howard Moore have been at Beaples Hill Farm near South Molton in North Devon since 2001. They signed the contract two weeks before the outbreak of Foot & Mouth so 'you could say it was a very stressful move as our sheep were in four different places, some in infected areas, some not.' They bought the farm mainly because of its accessibility to the main road network for Howard‚Äôs job as an Agronomist, covering South Dorset, South Somerset and East and Mid Devon.

The farm is 134 acres of north-facing permanent pasture rising from 650ft to 900ft with views of Exmoor. The sheep are housed over winter, as Beaples Hill is very wet with around 1400mm (55in) rain, with rising springs from Exmoor on the higher ground. However, the Moores can grow a lot of grass in the summer, allowing 500 ewes plus 120 ewe lambs and 30 shearling rams to be kept and all their own haylage produced with no outside grazing taken and all lambs finished off the farm.

Michelle and Howard used to have a very good flock of crossbred sheep, selling up to 1.8 lambs a ewe, but then disaster struck when it was found they had Maedi Visna. They had been keeping a very young flock, lambing ewe lambs and culling older ewes, as the cull ewe price was good; the system seemed to make sense. Unusually, diagnosis of MV was made before there were obvious symptoms such as high ewe mortality, low lambing percentage and lambs not finishing. There were a number of thin ewes but there was usually a 'reasonable' reason, such as the ewe being old, having poor teeth etc. ‚ÄòWe are all very good at rationalising that we don‚Äôt have a major problem. After our catastrophe, I now think everyone should check a number of poor/cull ewes for diseases such as MV. I wish we had done it sooner!‚Äô

As the Moores had kept a closed flock, matters had been made worse as MV is transmitted via colostrum as well as from sheep to sheep.¬Ý After testing another 100 ewes they found 66 were positive, so made the decision to cull the entire flock after lambing.¬Ý ‚ÄòThat year it was quite clear that we had a huge problem, as we had ewes lambing down at Condition Score I.5-2 with poor milk, despite us feeding more cake than ever. We also had ewes with hard udders and no milk (MV can cause an indurative mastitis) so we ended up with over 160 pet lambs!‚Äô

Michelle and Howard were committed to sheep, so what to restock with? The Lleyn seemed the obvious choice as the Lleyn Sheep Society is noted for its commitment to MV accreditation. This meant that they could easily source stock from a range of MV accredited flocks. Of course, accreditation alone would not have been enough. They were also looking for a not-too-large ewe that could give the performance they wanted. Again, Lleyn fitted the bill.

They managed to source ewes from four flocks direct from farm - the whole flock from Imogen Mann, who was giving up (Imogen also kindly loaned her 2012 ram from Laga Farms), ewes and a ram from Edward Collins (Bearwood flock 981), ewes, rams and lambs from Reuben Saunders (Boakley flock 2309) and ewes from Nick Tavernor (Salocin flock 935).¬Ý They also bought 20 ewes from Exeter Society Sale (Manor Farm flock 2259). This was probably the best they could have hoped for in terms of minimising problems with flock health. 'There is no other breed where you can source this number of MV accredited animals.' Pedigree accredited Texel ewes from the dispersal of 2 flocks (one Signet recorded) were also bought. All the Texels are now Signet performance recorded with flock average in the top 5%.

Michelle and Howard are now running 350 Lleyn, 60 Texels and 90 mainly Aberfield cross Lleyn all MV accredited. 'The sheep are kept on a very commercial regime as that is their role. They are housed in December (as the farm is very wet), shorn and fed good quality ad lib haylage until 4 - 6 weeks pre-lambing when a 19% high DUP roll for higher colostrum production is introduced. This is thrown into pens, which means no bullying or gorging, although it probably uses a bit more straw.'

'120 ewe lambs big enough to tup are kept each year. The Lleyn lambs are put with the rams for one cycle when the ewes are in their second cycle; the 20 Texels aren‚Äôt lambed. This year the ewes scanned at 188% (195% for those in lamb) and ewe lambs at 148%. Empty ewes go back in with a ram to lamb outside in June.'

Howard is busy with his agronomy and farm consultancy work but oversees agronomy, grazing and non-contracted tractor work on the farm. ¬ÝMichelle has¬Ý local help and 2 veterinary¬Ý students for lambing. This starts around 10th March indoors as this fits in with making maximum use of grass (highest grazing demand when there is the fastest grass growth) with ewes turned out after 3 days on average. Ewes are fed rolls via a snacker until the grass is 4cm long.

'All lambings are recorded on a handheld EID reader, including birth weights, fostering, ewe traits etc so we know which are the best ewes after weaning weights and slaughter dates are taken into account. Poorer performing Lleyn ewes are put to Texel rams to produce butchers lambs. Middle performing ewes are put to Aberfield rams to produce ewe lamb crossbreds. This means that only the top 35% are bred pure, so ensuring better performing Lleyn in the future.'

All lambs are sold from the beginning of June until Christmas on a planned fortnightly basis through St Merryn on a contract to Tesco on a cost-of-production-model with known pricing throughout the year, allowing a more informed marketing basis.¬Ý In 2018, the Lleyn graded 2.5% E, 32% U, 64.5% R, 1% O, showing that pure Lleyn give excellent prime lambs with equivalent deadweight compared to our old crossbreds, though the ewes weigh 5kg less.

The Moores usually keep 6 Lleyn and about 24 Texel ram lambs each year. The majority are sold off farm, although some Lleyn will go to Exeter Society Sale in 2019.Virtually no ram lambs are castrated. All twin crossbred ram lambs and Texels are creep fed. 'After weaning at the end of June all ram lambs are creep fed, and then rams kept for breeding come off creep at the end of August, so that all our breeding stock are predominantly grass fed. This mirrors our own requirements and commercial customer situations.'

Michelle and Howard have kindly agreed to host the West Country Club Open Day in August 2020, focusing on the importance of MV accreditation, regular checking for 'iceberg diseases' (including MV) and their excellent management and recording systems.