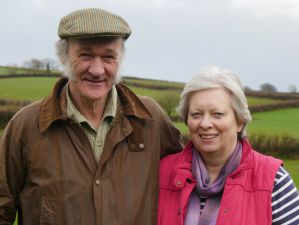 Phillip Caunter has lived and farmed at Stonehills (near Totnes in South Devon) all his life; he is fourth generation on this farm and can trace his agricultural roots back to nearby Dartmoor. He feels strongly that this family history means that 'sheep are in my DNA' and that 'I am a custodian of the land I farm'.

Stonehills is not an easy farm. It consists of 250 acres of permanent pasture on red loam soil with some very steep valleys going up to 450 feet. Rainfall is around 35". Although the holding has always been a mixed farm, policy has changed over the years. A major change in 2002 was the sale of the milking cows, with the focus since then being on beef and sheep enterprises.

Phillip married Christine, a local farmer's daughter in 1979 after she completed her Physiotherapy training in Sheffield. They have two children: Emma, now married and living on a farm in mid Devon and Mike, who is Livestock Manager for Adam Henson in the Cotswolds.  Both are committed to farming but are away from the family farm so Phillip is mostly a lone worker.

The Caunters are very active in West Country farming circles.  Phillip is Chairman of the local Kingsbridge Sheep Discussion Group and Chris is past National Chairman and Life Member of the Zwartbles Sheep Association; she is also the current Chairman of the Whiteface Dartmoor (WFD) Sheep Breeders’ Association. They feel that 'it is a real privilege to travel all over the UK to meet shepherds, see their farms and to visit shows through our sheep links'. 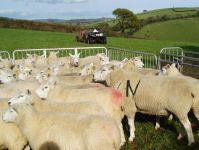 All the registered and pedigree sheep at Stonehills are maternal breeds, albeit with some different characteristics. 'We have a great interest in all sheep, the industry and its people and this has meant that our sheep breeds have evolved over time. We started with the commercial four-teated ewes and Lleyn. Zwartbles sheep came in 1994 only because Chris wanted to spin wool and fancied some black sheep.  Zwartbles were very new to the UK and, with their increasing popularity and high value, we took the opportunity to build a flock to enhance our business. Finally, the Caunter family have been associated with Whiteface Dartmoor sheep for many years.  In 2009 our interest in these rare, hardy maternal sheep led us to re-establish a flock at Stonehills.'

The Caunters' aim is to:

A new project is to see whether Poll Dorset x Lleyn and Blueface Leicester (BFL) x WFD ewes would be good alternative replacements for commercial farmers in the West Country. 'The Lleyn x is a robust, early lambing ewe and the BFL x improves the size and prolificacy of the WFD'.

Phillip bought his first Lleyn ram in 1984, planning to cross it on the hybrid he was developing at that time, in order to increase its milkiness and prolificacy.  The feature of this hybrid is four milking quarters and the ability for more than two lambs to suckle at once.  A small flock went to LiverpoolUniversity in 1988 and research and development has been ongoing since that time.

Having realised the potential of the Lleyn, Phillip began his registered flock (Flock 380) by purchasing four ewes from Flock 193 in 1986. In 1989 the Caunter family went to the Lleyn Peninsula for what Phillip promised was a holiday, but this was a subterfuge, an excuse for Phillip to attend the Gaerwen sale and meet breeders and learn more about the breed......and also to buy ewe lambs from Flocks 50 &193.

Scanning is more than just a check....it is an important management tool enabling the feed regime to be tailored to different classes of ewe and housing chosen to suit, with ewes coming indoors 3-4 weeks before lambing, depending on the weather.

Lambing is staggered, with the four-teated ewes and crosses first, then the Lleyn and Zwartbles, followed by the Whiteface Dartmoors. 'The crossbred ewes lamb in February and the lambs grow well to meet the early market; they are sold deadweight.  March and all hands to the pumps as the Lleyn and Zwartbles lamb at 180 to 190%.  The Lleyn grow away well and those not reserved for registering will be sold deadweight at 18 -19 kg U & R.  Zwartbles have a different growth pattern and we grow them on to heavier weights for live weight sale later in the season.  The WFD lamb very independently, but only at 120%. They are slower growing but achieve a good carcass and are renowned as “Angel’s meat” due to the taste and tenderness.'

Back in 2009, Phillip decided to focus on Herefords, chosen for their docility and 'easy care' characteristics. The herd is now up to 40 Hereford cows (mostly pedigree) with their followers.

Progress is being made. Phillip and Christine were 'chuffed' when they won Best Bull Calf in the large herd class of the 2015 South West Hereford Herd Competition.

The Caunters are convinced of the necessity of informing the public, telling our story and making the provenance of our products work to obtain a realistic price.  With this in mind, Chris spent four days in 2015 in Exeter City Centre (at Exeter Cathedral and Exeter Waitrose), both with WFD sheep, and realised that 'communicating with city folk is very different from talking to those who come to Country Shows'.

At Stonehills, 'we are nearly at our goal of 100% pedigree Herefords and will continue to develop the quality of our cattle.  With regard to the sheep, the Lleyn will continue to be the mainstay of our flock and we will move even more towards low input and easy management, essential for the future prosperity of the industry'. 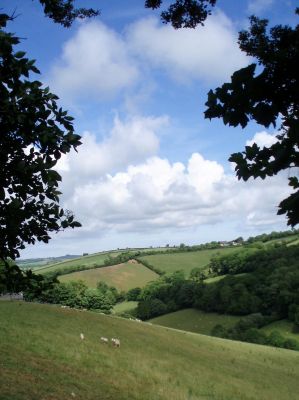 at 2 pm. ALL ARE WELCOME! Please come along, meet the Caunters and see their livestock in this beautiful part of the country.

Written by John Adams and Chris and Phil Caunter