LLEYN WITH A COMMERCIAL FOCUS IN NORTH DEVON 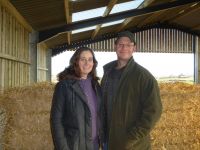 Robin Irwin’s grandparents purchased Lower Kingstree Farm, near the picturesque village of Kings Nympton in North Devon, in March 1942. The area is renowned for its sheep (and its rainfall). The farm is north/east facing. It consists of 150 acres of grassland and 30 acres of woodland situated at 500 – 700 ft above sea level with a predominantly clay loam soil. Robin and his wife, Emma, now own a further 50 acres and take summer grass keep on another 50 acres.

Until the late 1990s a pedigree Holstein Friesian herd was the main enterprise, but in 1988 the family established the ‘Kings’ flock of Pedigree Suffolks, aiming to produce ram lambs and females for the pedigree market. However, the sheep strategy at Lower Kingstree has changed a lot over the last 5 years. The once sizeable Suffolk flock now consists of 25 ewes with some of the top genetics of the breed. Embryo transfer is used on the best ewes each year.  One of the highlights so far has been the sale of the ram lamb Kings High & Mighty for 24,000gns. He became 'Sire of the Year' with sons selling to 32,000gns. This ram, along with another high priced ram, Kings Theatre, has had a great influence on the breed, featuring in many of the top breeding bloodlines today. The flock has been awarded Champion in the West Country Suffolk flock competition 6 times.

Back in 2009, Robin and Emma purchased their first Lleyn at the Exeter and Ross-on-Wye Sales, with the aim of using them as embryo recipients the following summer as one crop ewes.  They bought 'larger' ewes from Wynne Davies, Flock 50, for this purpose, ones that would be able to carry and give birth to heavy Suffolk lambs. However,  they soon realised that the Lleyn would not cycle early enough to synchronise with the Suffolk donor ewes and so they later bought 30 Poll Dorset ewes for this purpose.

Robin and Emma were really delighted with the outstanding performance and maternal attributes that their Lleyn had demonstrated in their first year - 'their ease of management, their maternal qualities and their ability to make use of the poorer permanent pastures on the farm'. Therefore, although they no longer wanted to use the Lleyn ewes as embryo recipients, the Irwins made the decision to start up a larger commercial enterprise whilst retaining the MVA status of the farm. They purchased a further 200 Lleyn ewes in 2013. Not wanting to buy from too many flocks, the Irwins chose 'tidy, well put together' ewes of medium size mainly from flocks they had previously purchased from at Society Sales, supplemented by 80 bought off farm from ST Morris. Flock 273. The flock now consists of 330 medium sized Lleyn ewes that can easily rear 2 lambs at  a 'good' stocking rate. The top 50 are run pure, while the rest are put to Charollais and Texel rams. Using this approach, the Lleyn have combined well with the pedigree Suffolk enterprise. 10 Charollais ewes are kept to produce rams for the commercial flock, while Texel rams are bought in.

Ewes are out-wintered, being housed a fortnight before lambing in late Feb – mid March and they are out again within 72 hours of lambing. Pre-lambing, ewes are offered Lifeline Lamb & Ewe buckets, and round bale hay. Depending on the scanning results, ewes are fed a high quality ewe nut in the weeks leading up to lambing. Once they have lambed, feeding depends on the weather and grass availability. The oldest, most forward lambs may be creep fed if 'we feel they will hit a strong market'.  Later lambs are left without creep.

Prime lambs are sold live through local markets from June and approximately 50 ewe lambs are retained.  In 2014 all lambs were finished and sold by the end of October.

'The pure Lleyn lambs tend to have a lighter frame to them, so the wether lambs finish later than the crosses, but are not too far behind.'  The Irwins have found that the 'Charollais x lambs have been good, meaty lambs with tight skins, well sought after in the market, and they finish more quickly than the Texel x lambs.  The latter are well fleshed, with great back ends and super skins, all important when selling live. The lambs are generally marketed at 40 – 43kg'.  The Irwins previously believed that 'it would be a struggle to get much more weight onto a lamb from a Lleyn ewe, but this year (2014) we have taken some cracking Texel x Lleyn lambs up to 50kgs which have been easily marketed'.

Great care is taken when selecting pure bred ewe lambs that are to be retained. 'Ewe lambs with the potential are marked in June. Then, in September, they are sorted for another pick.  We select for correctness of feet and legs and want a 'well put together' lamb that will fit into our system. Ewe lambs are not lambed at the moment but it is something we may do in the future'. 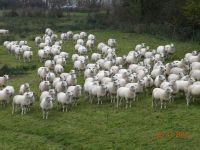 The system that the Irwins have developed has proved to be very successful. To build on what they have achieved, a new lambing shed has been built to accommodate increased numbers. The intention is to go up to 500 ewes.

Robin and Emma both work full time on the farm and Emma's technical background (degree in Agriculture and experience as a ruminant nutritionist at a local feed mill) is of great value.

The couple have two young children, Jocey age 6 and Logan age 4, who have a great interest in the sheep and own ‘Shortbread’ the only Suffolk x Lleyn ewe in the flock and, 'having seen how this ewe has performed, we may well be using some Suffolk rams on the Lleyn in 2015'. The Irwins show their Suffolk sheep at the local County shows, and at a couple of local one day shows. The children also enjoy showing in junior classes, with Jocey taking champion Junior Shepherd in the under 11 years category at Devon County Show 2014.