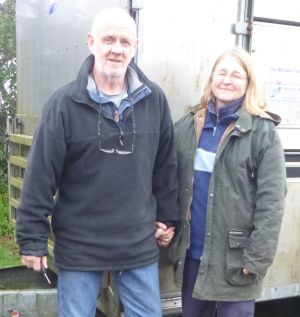 Dury Farm, near Postbridge, in the very heart of the Moor, is home to Shelagh and Martyn Longly, who would be the first to agree that they feel privileged to live in this unique location, but that it is not for the faint-hearted!  The farm consists of 46 hectares of upland, organic land, lying between 1000 and 1200 feet and bisected by the East Dart river.  There are 30 ha of improved land (of which 20 ha are accessible for cutting) and 16 ha of rough grazing.  The whole farm is in an UOELS scheme with 13 ha of river valley managed under an HLS agreement.  The average rainfall is 75-85 inches.

In the autumn of 2005 Shelagh and Martyn moved to Dartmoor from their 35 acre smallholding near Yeovil in Somerset (Martyn’s home county), where they grew organic vegetables and kept a small herd of North Devon cattle and 40 Dorset Down ewes.  The cattle soon made themselves at home at Dury Farm, doing what Red Rubies do best, but the Dorset Downs didn’t fare so well.  As Shelagh explains “The young lambs just didn’t have the coats to cope with the weather here.  They were also very susceptible to Pine, which the Lleyn lambs seem much more resistant to.  We therefore, decided to look for a much hardier and more prolific breed, which we could run as a closed flock for health reasons.  The Lleyn fitted the bill and have since proved very successful here.”

“The sheep are part of our rotational grazing system, which reduces worm problems.  The only routine worming we do is the ewes at lambing.  Freshly lambed ewes are turned out into fields which carried no sheep the previous year and FECs are used to monitor burdens in the lambs.  We rarely need to worm a batch of lambs.” 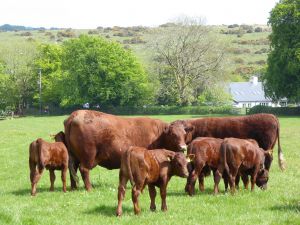 Shelagh purchased her foundation stock at Exeter Sale in 2006, buying 20 ewes from David Barlow (flock 1051) and a ram from Cathy Evans (flock 150).  “We have since used rams from Tim White (who did a lot of work selecting for worm resistance and resilience) and from Arfon Hughes.  In the past few years we have used a succession of rams bred by Gill and John Adams (flock 847).”

“Our original intention was to breed the best ewes pure and to run a terminal sire on the less good ewes for fat lamb production.  However, we have found that to be unnecessary, as the pure Lleyn lambs grade very well - U’s and R’s without getting over-fat.  The lambs are sold  to Jaspers, a large local abattoir.  Average carcase weight is around 19.5 kg with 24% graded U and 74% R, almost all 3L. Our cattle are sold as stores to a local farm off the Moor, where they are finished for Waitrose.”

It is a testament to the Lleyn breed that a Dartmoor farm 1000ft above sea level can produce pure-bred butchers lambs with these grades.

The flock now consists of 75 registered Lleyn ewes.  Shelagh uses LLEYN GOLD, the Society performance scheme, to help in the choice of ewe lambs to join the breeding flock.  These are the daughters of the best ‘Gold’ ewes, but are also selected for type and conformation.

The flock lambs at 190%.  Shelagh explains: “Ewes are kept on tight grazing for 2-3 weeks before tupping and are kept fairly tight for the first couple of weeks that the ram is in.  The rams are raddled and the ewes scanned so that feeding can be planned.  Single bearing ewes receive no supplementary feeding.  Lambing starts in the second week of April, in the hope that there will be grass to turn the ewes out onto.  We lamb indoors.  The main problem is foxes and badgers, rather than the weather.  Lambs go out at 4-5 days old when they are really well mothered up.”

“Our yard is built into a slope and the lambing shed has a gradient of 1:10, so I’m quite fit by the end of lambing!  Pieces of board are used along the downhill side of the pens to stop the lambs rolling out!”

The Longlys have spent the last 11 years totally renovating their farmhouse and barns and improving their pasture and at the same time, have established their successful organic sheep and cattle enterprises.  They now look forward to a future of steady improvement and consolidation but hopefully also, some spare time to enjoy living in this outstanding landscape. 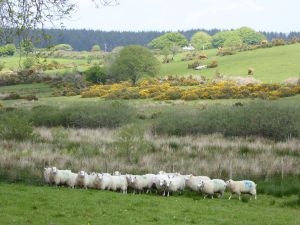