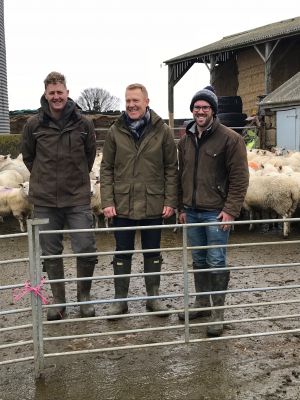 We have been at Trewithick Farm since September 2016 having taken on a 10 year FBT. We are a very coastal farm and lucky in that the grass grows to some extent for most of the year. The whole farm was previously in arable and has now been put to high sugar grass leys, which will be reseeded on a 5 year rotation with a forage brassica break crop.

We began with Lleyns in 2013 after purchasing some ewes from Dewi Ellis and a ram from Gwyn Williams, having been told about the breed by a friend. After some research we decided they were the breed for us. We currently have around 100 Lleyns – half of which go to aLlleyn ram and half go to a termincal sire – an Abermax (char x tex) from Innovis.

Lleyn ewes are wintered on a local dairy farm and never receive concentrates. At lambing they are fed a 19% protein red clover silage ad lib, with ad lib ryegrass hay. Lambing takes place indoors from the start of February, ewes are all run with a teaser and we only get a handful of returns. Ewes and lambs are then turned out on to grass and lambs are reared entirely from grass. Scanning results from the last few years have varied from 195% - 210% and our % of twins is increasing through selection and careful management, whilst triplet % is decreasing – thankfully!

All of our lamb is marketed through our own brand ‘The Cornish Lamb Co’. We do 2-3 farmers markets per week as well as lamb boxes by post and whole carcasses into chefs, restaurants and butchers. Lambs are taken to a minimum of 45kgs, but often nearer 50kgs to give us a minimum 22kgs carcass. The restaurants and local butchers love our grassfed Lleyn and Lleyn crossbred lambs due to their amazing flavour, texture and the perfect fat cover. We also lamb some dorsets in November/December and the chefs can tell the difference when we change from Dorset to Lleyn lamb. 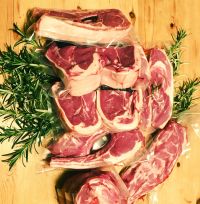 We find the Lleyn ewe crosses exceptionally well to the abermax sire giving us a perfect butchers lamb at a variety of chosen weights. The Lleyn ewe suits our all grass system very well. They are ‘good doers’ and maintain condition very well in our good climate and the flavour from a Lleyn lamb is becoming widely recognised – certainly by our customers.

This year we will be lambing 350 ewes consisting of the Dorsets, Lleyns and Highlanders (Romney x Texel x Finn) who lamb outdoors in April. This means we have lamb supply for 100% of the year. The sheep and system have been carefully chosen enabling us to continue with our full time jobs. 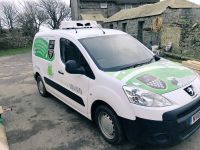