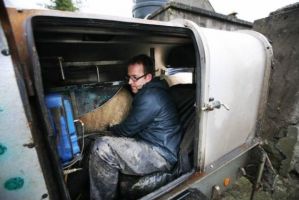 If he's not scanning he's dipping and if he's not dipping he's clipping which leads me to the question, who looks after his own 320 ewe flock?. Anyone who's as busy as Dominic needs his breeding ewes to be as self sufficient as possible and to this end Dominic has been converting his ewe flock to the Lleyn breed over the past couple of years.

Replacements are sourced at the society's sale in Roscommon but the long term plan is to run an A and  B flock. The A flock which will consist of his best breeding ewes will be run pure Lleyn with the B flock consisting of the bottom half of the ewes being mated to a Texel. Replacement ewe lambs will be drawn from the A flock with the rest either being sold as stores or fattened for slaughter.

Lambing begins around the 25th of March, around 80 ewe lambs are also put to the ram for one cycle with any that scan empty being slaughtered for the Easter market, there's no free dinners here. The 400 total scan around 1.8 and wean around 1.6 yearly which isn't bad going considering the effect the 80 ewe lambs will have on these figures. Lambing takes place entirely outdoors with minimal intervention, conditions where the Lleyn ewe has really thrived. Dominic says his biggest problem at lambing time is keeping down the size of single lambs as Lleyn ewes put it all into the lamb.Any spare lambs are fostered off or sold as pets to regular local guys so he can get clipping in early May before John joins him late May to tackle the big jobs.

Dominic changes strategies depending on the market and isn’t afraid to off load store lambs early if the market is good, leaving more grass for those retained. He likes to finish as many as possible off grass and believes Lleyn lambs are under appreciated in this respect. Lleyn lambs consistently meet the market spec killing out between 19-22 kgs without going over fat but most importantly finishing of grass.

Dominic has kindly agreed to host our club open day this year and along with looking at his sheep we’ll get the chance to see his modern New Zealand built automatic jetting race, this machine blasts sheep at high pressure with 12 nozzles soaking them into the skin. Each sheep gets a fresh 2 litres of highly concentrated dip (at least twice as strong as any dip bath) and means no dirt or dung gets introduced into the solution. This is a very quick operation which can cover 400 sheep per hour in good conditions and it should make for interesting viewing on the day.