Lleyn in the Wicklow Mountains 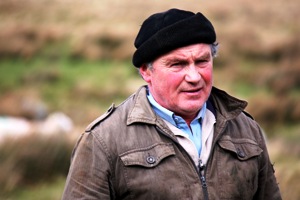 On a cold bright day in early January I visited a hill farm the property of Edward and Seamus Miley to see for myself their pure bred Lleyn grazing at an elevation of 1,300 feet. The Miley's bought their first Lleyn ewes at the first Society sale held in the Tullow Mart. They join the ewes with the ram at the end of October for late March/April lambing. They bring the ewes back from the mountain for this.

The lambs are kept on the lower land until about May 20th when they are returned to the mountains with their mothers to get them familiar with their surroundings and learn where they are allowed to go or not. Shearing takes place in June on the mountain and whatever dosing is deemed necessary is also delivered at that time. Lambs are drafted off during the late summer and brought down to lower ground for finishing. Up until this year all the Lleyn were bred to pure bred rams on a closed flock system but some of the 2014 lambs will be Suffolk or Charollais cross. The reason for crossing is that some of the ewes are not considered good enough for pedigree breeding standards. 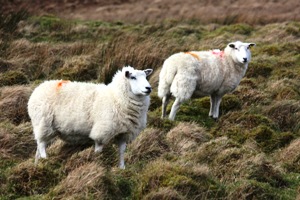 because they get more lamb production. The ewe lambs produce about 70% or 80% while the ewes produce about 180%. The lambs mostly finish off grass, any that do not are put into the shed and finished on meal. The lambs go to the local Kepak factory and normally grade U‚Äôs and R‚Äôs. Pure Lleyn lambs are about two weeks slower finishing than cross bred lambs.

When Seamus was asked why he thought the Lleyn worked so well for him, he answered "They lamb easily , they produce more lambs than the other hill breeds, they are very docile and placid. They are very good on their feet and seem to be very resistant to worms. In other words they do exactly as it say on the tin!!"