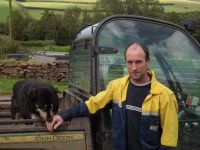 Anthony Williams become known to the Society after very kindly supplying two Lleyn ewes with four Beltex sired lambs for the promotional stand at NSA Welsh Sheep in May 2017. The sheep in the pens drew much attention hence I decided to visit Anthony and find out how he is utilising the Lleyn in his commercial system.

Anthony farms with his wife Jane at Llwyncelyn Farm. Jane has a full time job working in a Solicitors office. They have two children, Aled age 8 and Teifi age 6. The couple moved to Llwyncelyn approximately 8 years ago when they were given the chance to rent it from Jane’s family. There is 100 acres which runs up to 1100 feet as a traditional upland farm Anthony describes it as wet and steep and open to the elements especially the wind.

Anthony has always been into livestock farming growing up on a family dairy farm where his father still milks today, but unable to sustain the growing family and the chance to rent their own Anthony & Jane branched out. They currently have 300 ewes approximately half are registered Lleyn and the others are Beltex x Lleyn. They also have a flock of 40 pedigree Beltex ewes.

They first went into Lleyn when they moved to Llwyncelyn, with Anthony attracted to the traits of easy lambing and milky mothers. For a number of years they purchased their ewes from Peter Sharp. More recently they have purchased from Society sales at Carmarthen, Ross on Wye and this year at Brecon.

They use the Lleyn to breed a replacement for his prime lamb producing flock. The Beltex x Lleyn ewe is 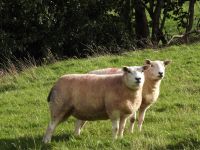 currently being put back to the Beltex to produce some very attractive lambs regularly grading E’ and U’s. When choosing his Lleyn ewes Anthony says he is looking for size and body to work alongside the smaller and shapely frame of the Beltex. Anthony notes that if I can’t see it with my eyes, it’s no good’. He very much believes that you have to like the look of your stock. He uses his own homebred Beltex rams.

Lambing takes place from the end of February onwards. Everything is lambed indoors to escape the weather although if the weather allows they do try to leave them outside for as long as possible. Across the whole flock they are scanning at about 188%.

With some of the Beltex x Lleyn being kept for replacements, the rest of the lambs are sold deadweight or live depending which is the strongest. Due to the wet land and the wet climate all lambs are sold and away by the end of the year. With the rise of the Beltex in recent years Anthony has also had success here and only recently sold 9 pedigree Beltex shearling rams to average £800 at Welshpool Market. 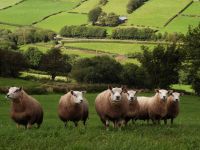 The stock all look very well with some tremendous lambs ready to go. One thing that can be noted that although we stood at nearly 1100ft there was still an abundance of grass and the fields were quite heavily stocked but not under pressure. Anthony puts this down to his dairy experience and his knowledge of grassland management. Over recent years he has introduced many new leys across the farm some of which have since been direct drilled to rebuild. Anthony comments that this is why he can run quite an intense system. This is something the Lleyn also helps with not been a huge ewe and able to succeed in this intensive system.

Although Anthony prefers dairy farming he still believes that sheep will remain his main enterprise at the moment. He likes the Lleyn ewe and praises her as “you can be hard on her and she will come back and work just as hard again”. As Anthony needs to run an intense operation the Lleyn is well equip to help him with this “the Lleyn is like the Holstein of the sheep world, they put it all into their lambs producing plenty of milk and they can rear plenty of them to be sustainable”. 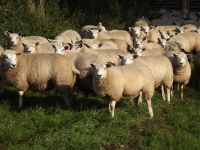