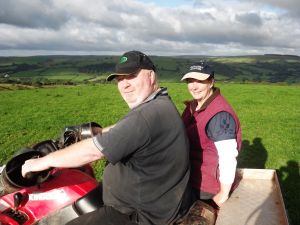 Colin & Julie Price farm at Felindre Farm, Upper Chapel near Brecon.  They farm approximately 200 Lleyn ewes and 50 ewe lambs.  You have probably noted them recently standing out from the crowd with their ewe lambs at Society sales.  At Exeter they had 1st prize and top price of £125.  At Ross on Wye they also won first price whilst also gaining the two top prices of £128 and £115.  Their Ruthin lambs were also in the top prices at £104, Carmarthen saw them sell to £104 and Welshpool £100.

This is a great achievement after seven years of been in the breed and it is all thanks to Julie that they went into the Lleyn.  The Family moved to Felindre back in September 2000 having taken on the tenancy.  The farm comprises of 179 acres plus hill rights.  At this point they were farming Talybont type Welsh, pure bred Suffolks and Dutch Texels alongside pedigree Limousin and Commercial suckler cattle.

In the mid 2000’s decisions had to be made as things weren’t stacking up.  Colin and Julie alongside various advisors were looking to improve their system to get the most from what they had.  Whilst doing this research Julie had noted many articles about the Lleyn and how it seemed to be coming to the forefront.  Now Colin is not the sort of chap who is easily swayed by features and glossy leaflets hence he wasn’t really as enthusiastic about the idea.  In fact he describes himself as ‘sceptical’ of the idea.  Colin keen to show his wife that he was taking note of her ideas agreed to a Sunday ride out to Ruthin to view the pre-sale show.  He thought this would be a good way to put the whole idea to bed. 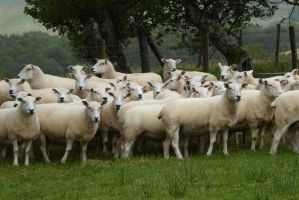 Having taken the three hour journey to the mart, Colin was impressed.  As he walked around the pens he could see more and more how this breed could work for them.  So much so, they made the journey again to Ruthin the following day to purchase a pen of ewe lambs.  Colin must have had a good eye as the pen he had picked out from Mr & Mrs I Jones, flock 233 had been crowned champion, loaded up into the back of the pickup they travelled back to Felindre.

On arrival home they let them out of the trailer to join his Welsh ewes and ram, he wanted to see how they coped on his Welsh hill farm before committing any further.  Lambing time was the decider.  It was a particularly rough morning, cold and wet.  They Price’s were lambing outdoors.  As Colin drove down the field on his bike, one by one he came across his ewes, some with live lambs, some not so lucky but all three Lleyn ewes which had lambed that night were all sat there with two lambs a piece curled up with full bellies alongside them, Colin was converted.  At this point Julie, you must have been thinking “I told you so”.

Over the next few years Colin and Julie continued to purchase stock from Society sales.  In 2008, the Felindre, Flock 1757 was registered. 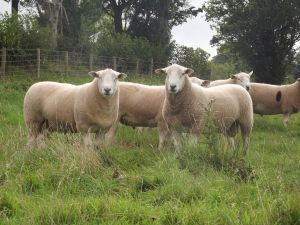 Colin had started out as a shepherd on a farm at Cirencester, this is where he met Julie.  Following from this he has done contracting work, which included running a shearing gang, shepherding and preparing lambs for the show ring.  This has led Colin to work with many different breeds over the years.  Julie has worked in childcare while more recently finding time to work in a local nursing home, a job which she clearly enjoys.

The farm is a very traditional Welsh hill farm sitting at 900-1300ft above sea level.  A recent flock visit by the South Wales Club left many people flabbergasted at the harsh nature of the farm, with people assuming that the quality of Price’s stock at the sales must have come from a low lying farm.  Colin “I am very strict as to what comes here, it has to be hardy to survive the conditions.  The grass doesn’t come through to late spring, the summers can be wet, the winters are cold and wet, nothing gets special treatment here”.  Everything is put to the Lleyn ram.  Colin says he runs a very simple system with tups run in family groups.  Hence all the ewes bred from the Dugdale ram are put to the Bennett ram.  All the Fort bred ewes are put to the Dugdale ram.  The recently purchased Walling ram will be used to tup the ewe lambs.  Colin believes this system is what helps him breed consistently.  “I want a stylish looking female with plenty of body, hence this is what I look for when selecting my rams” notes Colin.  The system is all helped by the tagging with all sheep bred from each ram receiving a different coloured tag, this enables the whole family to know what’s what.

Colin & Julie have two sons, Gareth who has his own contracting business and Matthew who works as an AI technician for Genus, both are roped in to help out at home when needed.  Daughter Claire works for the Welsh YFC.

They regularly scan at 180-200% which gives them plenty of lambs.  “We get triplets but we are not over run by them”.  They lamb in early March with the majority finished after three weeks.  Julie says the Lleyn are a pleasure to work with, they just get on with it”. Most of the ewe lambs are either kept for breeding or sold off the farm as breeding sheep.  They keep a handful of ram lambs which are registered for sale mainly at Society sales although they do sell some from home.  The remainder of the lambs are sold finished through the live market at Brecon where they are regularly above the average price.

Colin and Julie also find time to participate in showing.  They attend many local shows and have supported the Royal Welsh for many years.  They have twice had reserve breed champion at the Three Counties, they have also had reserve male champion at the Devon County.  In 2014 they were successful in winning the South Wales Club Bi-Annual Flock Competition Large Flock section. 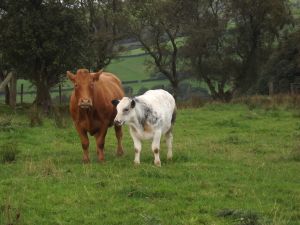 As well as the sheep another passion of the Price’s is breeding beef cattle for the show ring.  They have bred many Limousin and British Blue cross calves which have been sold through Brecon, Sedgemoor and Chelford Marts.  These have been sold to regular customers and shown successfully at the Winter Fairs and summer shows.  Gareth has successfully shown some of their calves in YFC competitions and they have had success with carcase competitions.  They also have an interest in pedigree cattle and the Selwyn herd of Limousin is still running alongside some pedigree British Blue cattle.  The cattle are currently down to 13 head of cows as they are in the process of improving their health status but the aim is to get this number back up to 25 cows very soon.

Currently a little under stocked it is hoped to increase the sheep numbers to 300 ewes to help produce regular runs of ewe lambs and shearling ewes for Society sales.

“I would describe the Lleyn as a good honest commercial ewe.  She lasts well and is hardy.  She has better prolificacy figures than some others breeds whilst a fantastic mothering ability” Colin.