A breed of sheep that works with a simple low input system is a priority in the sheep enterprise of David, Jane and Marc Jones who farm Trefnant Hall, Berriew, Welshpool . 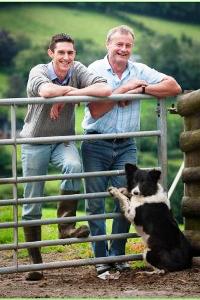 Marc, 27 works for ADAS as a Farm Consultant. In his spare time he works with his parents on the family farm. Marc purchased the farms first 150 Lleyn ewes at Ruthin in 2009, and a further 90 privately in 2010. He completed a Hybu Cig Cymru Scholarship in 2009 which involved study in New Zealand . He was impressed with the low maintenance; outdoor lambing systems used out there and could see how the Lleyn could help him replicate these practices in Wales . To be able to work with this arrangement the lambs need to be vigorous at birth with strong milky mothers both points of which the Lleyn excel at. Marc learned in New Zealand that sheep could manage on forage alone with no need for concentrates, a huge way to keep the cost of production down and a must have for the Jones family. The Lleyn ewes lamb on the 1 st April. They are wintered on roots from Christmas to early March. They are then moved onto grass for the three weeks prior to lambing with no concentrates. "The ewes will scan at 185% without too much grass" said Marc.

Parents David & Jane have farmed at Trefnant Hall since 1985 after a move from dairy farming. The farm is 500 acres of mainly south facing land. At 800 feet above sea level it has an annual rainfall of 900mm, although a dry spring and summer can make for a very lean time with the grass as the underlying shale is very good drainage. The flock consists of 1600 ewes of which 400 are Lleyn at the moment. "I would like to increase the Lleyns so they eventually replace the Texel crosses" said Marc.

The 400 Lleyn ewes are bred pure with the majority of the ewe lambs being kept for replacements. The male lambs are sold deadweight to Dunbia via the Young Farmers Lamb Scheme where they are consistently hitting the R3L grade.

EID on the farm is being looked at as a tool to help improve management. Everything is performance 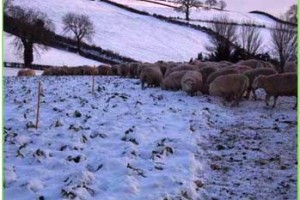 recorded, this is aided by the farms involvement in the TAG Project run by 'Menter a Busnes'. They receive free tags and EID equipment for their help in trialling the technology. Female progeny are being compared with the previous progeny from the same sire; those which are shown to be from a high performance female line are being kept in the flock. The same is being done with the male lambs and the slaughter data.

The intention for the future is to get up to a full flock of 1600 Lleyn ewes. A nucleus flock of approximately 600, with the best performance figures will be kept to breed the flock replacements. The remaining 1000 ewes will be crossed with terminal sires, such as the Hampshire Down to give a fast growth rate for prime lambs whilst still maintaining a low 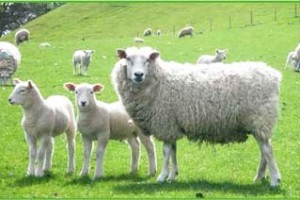 maintenance outdoor lambing structure. This combined with a ewe that is capable of rearing 150-180% lambs allows the ewes to produce more weight in lambs hence a greater profit. Marc concludes "The aim is to have a high output system with very low costs".

Notes: The below figures assume breeding from ewe lambs in the first year, the ewe lambs are included in the 400 head. The number of lambs reared is 140% taking into consideration the ewe lambs (the ewes, 2 and 3 crop are rearing 150-180%). All stock sold are sold for killing i.e. prime lambs and cull ewes. The lambs sold figure is reduced by 90 head as these are ewe lambs kept for replacements.