The beautiful rolling hills of Mid Wales near Meifod, Powys are home to Flock 893 and to three generations of the Bennett family. Alun and his wife, Helen, farm Upper Hall, Doladron and Tyn-y-Coed in partnership with Alunâ€™s parents, David and Audrey, and the tradition is set to continue through their three children, Robert, Catherine and Hywel. Alun is the third generation of his family to farm here, while Helen is also a local girl, coming from only 8 miles away.

Weâ€™ve seen Alun and Robert with their excellent rams in the Sale ring for many years now but, in fact, the pedigree Lleyn flock is just one part of the Bennettsâ€™ enterprise. The Home Farm, Upper Hall, was originally 200 acres but it has been extended over the years so that the family now has over 600 acres. Upper Hall and Tyn-y-Coed lie between 250 and 700 ft above sea level with rather variable heavy to medium loam soil. This is a good grass growing area, very suitable for sheep, but also for other types of agriculture.
Upper Hall had always been a mixed farm, with a dairy enterprise and an early lambing sheep flock. Â

Although now much larger, the farm is still run on mixed farming lines, with quality being the watchword in all branches of the enterprise, which has been totally organic since 2000. Alongside the sheep, there are 130 Holstein / Friesian dairy cows and replacements, 40 beef cattle (sold fat and store), organic vegetables (potatoes, carrots, parsnips and beetroot), 80 acres of cereals and a new 32,000 free range hen unit. It sounds complex, but the family enjoys the variety of this system and much prefers it to being tied to just one class of stock or crop; it also makes financial sense to spread the risk across several activities.

The sheep have always been important at Tyn-y-Coed and, over the years, different breeds of sheep were 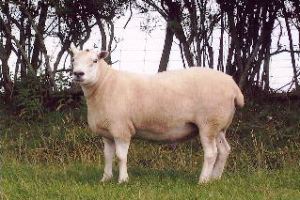 tried. In the mid 1990s, Alun became interested in Lleyn as they were building a reputation for easy management and could be run as a closed flock, with home-bred replacements, which allowed flock improvement and a high health status.

Alun is convinced that, â€˜while the sire is important, the Lleyn female is dominantâ€™, and so choice of foundation stock was crucial. The Bennetts went to Gaerwen in 1996 and bought a 5-year old ram (for 460 gns) from Vernon Jones (Flock 61) and 36 ewe lambs. They were back again the following year for a further 30 ewe lambs and 70 ewes and also a shearling ram (for 960 gns) from Flock 123. These purchases mean that much of Flock 893 is derived from Flock 99, itself founded on stock from Flock 43 (Tom Rees Roberts). These traditional, quality ewes had sound commercial traits and proved to be the backbone of the flock. Other influential purchases included females from Flocks 124, 450, 172 and, later, Flock 913.

The Bennetts are renowned in the Lleyn world for the quality of their stock. All the Lleyn are bred pure and surplus females are sold at Society Sales. 500 ewes and 100 ewe lambs are put to the ram. Scanning averages 180%, with doubles considered ideal. Lambing is carried out indoors in March and April. Those with twins are brought in a month before lambing, and singles 10 days before. A complete diet is fed in the manger, a mixture of whole oats, soya and silage, eliminating trough feeding. 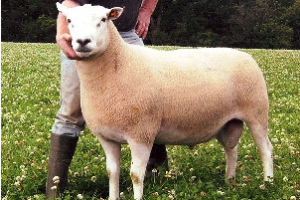 Each year about 30 rams are reared, many being taken to Society Sales and the Builth Wells Ram Sale. Bidding is usually brisk and the family has enjoyed seeing the rams end up in some of the countryâ€™s most prominent flocks. Â Selection of stock rams is taken very seriously. â€˜Top quality rams are scarce and every effort should be made to buy them when seen!â€™ â€“ says Alun. He follows his own advice and has bought some fine rams. â€˜Although having little influence through his sons, 123S129 produced great breeding ewes, some of which are still in the flock as 10 year olds.â€™ This ram was followed by 172Z92, bought for 2250gns at Charles Sackville Hamiltonâ€™s dispersal sale in 2002. He produced some excellent male and female progeny, with 7 of his sons selling for an average of over 3000gns at Society Sales.

Records were broken in 2003 at Carlisle when the Bennetts bought 737A288 from John Morton for 9000 gns. This ram really has proved that good rams are worth paying for, with sons selling to 8,500 gns and 10 averaging over 3000 gns. A pen that included some A288 ewe lambs also sold for a breed record of Â£300 for the Champion females at Carlisle in 2005.

The Bennetts believe that Lleyn ewes are excellent mothers, with the ability to rear quality lambs, whether bred pure or crossed with a terminal sire. The ewes should be medium size, with length, good conformation and tight skins, and it is essential for the future of the breed that they maintain the maternal characteristics that have made them so popular.

The flock is going to be electronically tagged for the first time in 2009 and, in addition, the Bennetts have 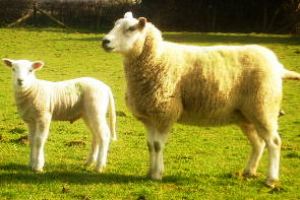 recently committed themselves to Signet recording. For many years, Helen has been keeping meticulous records of the Lleyn sheep, so working with Signet is just an extension of what they were already doing to make further progress with their flock. They believe that the industry is becoming more fact-based as time goes on, that more and more people are buying on figures, and that this trend will continue.

On the family front, the future of the farm seems assured. All three children are obviously interested in, and committed to, farming. They are all active members of the Vyrnwy Valley Young Farmers Club. Robert and Catherine have represented Montgomeryshire in stock judging at the Royal Welsh Show. Robert already farms at home while continuing his education at College two days a week. He has also established a small Texel flock (to complement the Lleyn). Hywel is going to join the farm next year, while Catherine is currently doing her GCSEs and hopes to go to Harper Adams University College.

This dynamic and close-knit family is proving that there is a future in farming based on a sustainable, balanced, mixed farming approach, as long as you always focus on quality.