This year the NSA Welsh Sheep events is being hosted by Coleg Meirion Dwyfor at their Glynllifon Site.  This renowned agricultural college situated in North Wales is part of Grŵp Llandrillo Menai which was established in 2012 as a result of mergers between Coleg Llandrillo, Coleg Menai and Coleg Meirion-Dwyfor. It employs 2,000 staff and delivers courses to around 27,000 students, including over 1,000 higher education students, across Anglesey, Conwy, Denbighshire and Gwynedd.

The farm and forestry are managed by Mr Rhodri Manod Owen who is also responsible for the farms quality Lleyn flock.  Alongside 600 Lleyn ewes, there are 200 dairy cattle, 35 beef cattle and a 50 sow pig unit.  The site at Glynllifon has been operating as a college since 1954.  It comprises of 700 acres which include 400 acres of farmland and 300 acres of forestry. Whilst looking to the future and preparing for the removal of farm subsidies, the decision was made in 2014 to move to a closed flock and Lleyn was chosen.  Rhodri notes “We believe the Lleyn flock to have the ability to produce lambs off a grass-based system without too many input costs”. 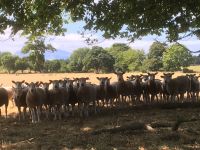 The farm is noted for having a maritime climate hence making it good for grass growth with very few frosts.  The Lleyn are especially good at utilising the winter grazing after all the cattle are brought in.  After lambing they are put onto a technograzing area which sees them moved to fresh grass every three days.  Rhodri says that they are striving to produce a 60kg ewe that can rear two lambs but admits that they are finding this difficult to achieve, regularly seeing their ewes at 75kg and above.

Lambing time takes place in March, indoors with everything turned out soon after lambing.  The ewes are regularly scanning at 170+%. 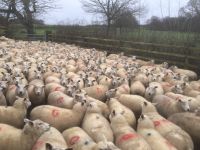 Lleyn rams purchased from the Society sale at Ruthin.  “Breeding our own replacements ensure they are fit to thrive here at Glynllifon” says Rhodri.  When selecting a ram EBV’s are considered but stronger emphasis is always on teeth and physical correctness.  Flock B are very much commercial, these run with Texel, Charollais and Charmoix rams to produce a killing lamb which is sold direct to slaughter.  The data received back from the abattoir enables analysis of grades, growth rates and effectiveness of the terminal sires.

The future of this flock depends on the needs of the college although commercial viability does plays its part, ensuring they stay.  Rhodri notes that in the future they may split the flock more to include some earlier lambing but also a later batch in April. There are thoughts to keep more pure-bred animals to assist with ease of lambing.  Rhodri certainly seems happy with the Lleyn at Glynllifon, he describes it as “the best maternal, lowland purebred ewe available”.