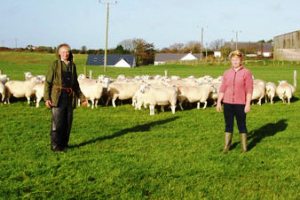 Whenever anyone talks about the Royal Welsh, one flock sticks with me “Wells Flock 575”. The Wells Family, Helen, Roger, Edward and Lorna won the Championship with their shearling ram at the 2010 show, they also won in 2008 and had best opposite sex to the champion in 2009 so they appear to be the team to beat. They breed their champions on their small holding where at present they have 45 breeding ewes.

Helen and Roger obtained their first Lleyns in 1989. At the time they were undertaking lambing shifts for Mrs J Wells Flock 261 (no relation) and were paid with 6 ewe lambs (it sounds like Jack and the Bean Stalk). Helen says that “Lleyn Sheep chose us!”

They have been at Glaneri for 25 years. The 20 acres are rented in the rolling countryside, 1 mile from the coast and 350 feet above sea level. The ewes are over wintered on rented land at the Dairy Farm where Roger works as the Herdsman. 25 ram lambs and 39 ewe lambs are being kept for breeding. They have 3 stock rams of which two are jointly owned. One is with Richard and Jennifer Twose and the other is a three way split with Richard and Jennifer and Lionel Organ. Helen tells how Lionel Organ has given them much advice over the years. Recently, and since the Wells growing successes Lionel has indicated he may be regretting this now! Mr Tom Rees Roberts gave them valuable advice and pointed them in the right direction (Helen made no mention of the advice that was given so we will have to all keep looking). 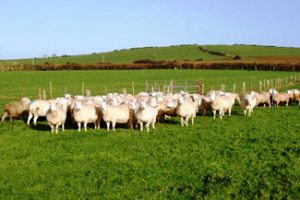 large dairy farm. Roger was the herdsman and Helen worked in the Yoghurt Production unit as well as relief milking elsewhere.

Roger works as the Herdsman for Troedrhiw Holsteins, he has managed the herd of 190 cows for 25 years. Helen is a trained furniture maker and is presently working in house renovation.

Edward now 23 years old has worked on a local dairy farm since leaving school. He topped up his knowledge by attending day release at Ceredigion College. He is interested in the “tractor based activities” although he enjoys showing cattle at local shows. He helps a lot behind the scenes with the sheep at home.

Lorna, 21 is in her third year at Cardiff University studying Physiotheraphy. She has enjoyed and learnt a lot from showing cattle where she has won many awards. She has brought these disciplines into the sheep ring and Helen believes she is the families “secret weapon”. 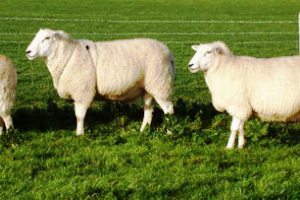 Showing has always been in the background. Roger has always been involved in showing dairy cattle so it was a natural progression to show their own sheep. They started showing in the early 1990’s with the first Royal Welsh attempt in 1993. They received a fourth prize for a shearling ewe which caused them to catch the bug and the Royal Welsh is now the highlight of their showing calendar. For the past two years they have won the Gwilym Williams Perpetual Trophy for the most points gained in the Lleyn classes. Away from the Royal Welsh the awards are also mounting up with champion at Cardigan, champion at Pembrokeshire Show and champion at the South Wales Lleyn Sheep Championship Show, at Llandeilo.

Helens “icing on the cake” for 2010 has been winning the South Wales Flock competition, once again taking most of the awards with 1st in the stock rams, 1st in small flocks and 1st overall.

Helen puts their showing success down to attention to detail and good preparation as well as great advice received from fellow breeders.

The ewes are lambed in February/March. An indoor system is used due to the limited amount of land. They are hoping to bring them all forward to February to help grow the lambs for the Royal Welsh show ring. The ewes are not fed until six weeks prior to lambing when 18% cake is given, once inside they are on adlib silage. In 2010 a 190% lambing percentage was achieved.

The main aim is to breed breeding stock where the show ring is used to market their breeding.

The aim now is to increase the flock to 100 ewes as and when time and land allows. As always 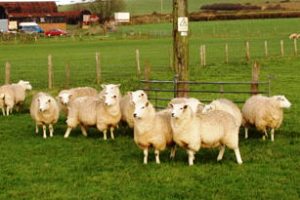 improvement in breed points is always on the cards.

The family would like to thank fellow breeders who have supported them. They would also like to thank those who have purchased stock from them and they wish you all the very best.

The bar for 2011 is set high but here is a family that is willing to put the work in and has a high chance of making it. Well done Helen, Roger, Edward and Lorna for such a successful year and all the best for the future