Lleyn at its best in a Commercial System 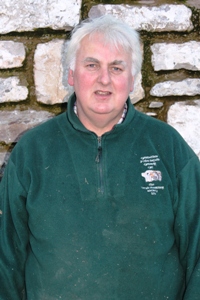 The year of 2001 brought with it many changes. We all know it was the year of the dreaded foot and mouth. Up until then we had operated as a flying flock of 2000 plus ewes mostly mules and crossbreds. These were bought annually from Welshpool and Bishops Castle. The lambs from these ewes were sold fat with the ewes sold at the same time.

2001 also happened to be the year I married my wife Lisa. Lisa had lived on a small holding with her family. Lisa's father John Gordon Smith, a retired dentist had a pedigree flock of Lleyn sheep, flock 732. Now that he was my father in law he it was very obvious that he was very keen on his Lleyn sheep and he could not understand why his newly acquired son in law did not keep them so being the good son in law I bought some of his older ewes.

I tupped these ewes with a Charollais, the ewes scanned very well. Before we knew it we were lambing them. I will always remember being impressed with the ewes strong maternal instincts and how easy they were to manage. The weeks went by and the lambs became ready for marketing, I was pleasantly surprised when selling these lambs they seemed to fall into the right category weight wise 38 to 45kgs. They had a good reception with the buyers at the market, selling at a much higher rate than their mule counterparts and had not cost as much to produce. By now I thought the “old dentist” was not far off the mark, these Lleyn sheep have a lot going for them.

The best way to keep more Lleyn I thought was to breed my own replacements. I bought more ewes and invested in some Lleyn rams. I wanted to breed them with length, skin, and muscle if possible.

As time went on my flock has become mainly Lleyn. I have 2000 ewes, we breed about 300 plus pure, the 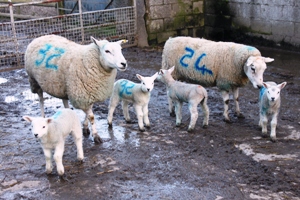 rest of the Lleyn are crossed with either Dutch Texel types or Beltex Cross rams. The Beltex crosses seem to work very well, we have been buying rams from Paul Slater, his rams seem to produce exactly what the market wants the lambs always sell at a premium. The January born lambs are creep fed to help ensure they catch the early Easter trade. The aim with the February – April born lambs is to sell as many as possible straight off their mothers and straight off grass with no creep feed. I often get less than 5% of the lambs left which will be topped up with pellets to get them away.

I farm alongside my brother Robert who is a buyer for several abattoirs. We finish 800 – 1000 cattle a year and it is Robert who runs this side of the business. 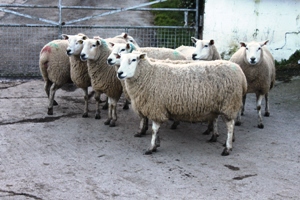 We are very fortunate to live in a strong live auction area here in the Vale of Clwyd. On my doorstep we have Ruthin auction and just a bit further along the vale St Asaph auction. The majority of my lambs are sold through a live auction. To date I have not competed in prime stock competitions although it is something John, the shepherd and my children –George, Phillipa and Catherine are showing interest in. Our lambs achieve good prices at the auction, on several occasions I have come away with the day’s top price which is quite satisfying. There is nothing like having a good trade at your local auction, it is as good as any rosette.

For me the Lleyn ewe is the most efficient and economical sheep I have ever come across, she is prolific and produces the right sort of lamb for today's market and that will do for me.

Hugh Edwards is a regular supporter of Ruthin Auction as both vendor and purchaser. Hugh is very keen with his selection of ewes selecting Lleyn replacement ewes from renowned breeders focusing on conformation and tight skins and then purchasing Texel and Beltex rams and these cross perfectly with Lleyn Ewes.

Hugh consigns top quality lambs on a regular basis from Easter to late Autumn consistently achieving premium prices with Lleyn X Texel and Lleyn X Beltex lambs. The lambs presented during the early months range in weight from 36kgs to 46kgs, and as the season progresses the lambs presented are in excess of 46kgs and mainly grass fed. Buyers are always complementary of Hugh’s lambs and this is a reflection of Hugh’s confidence in the Lleyn as a good crossing ewe.