It's Black & White with the Lleyn and Suffolk ! 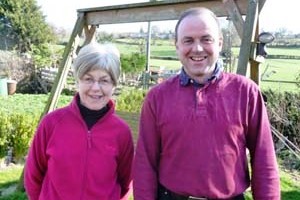 For all of you who visited the Society stand at the Royal Welsh Show last year you will hopefully remember seeing the impressive pen with the Lleyn ewe and her two Suffolk lambs. The owner of this splendid example was Mr Hugh Jones who farms in partnership with his Mother Glenys and up until 2010 his late Father Vernon. The family has farmed at Pentre Farm, near Ruthin since 1961 and have the well established Lleyn flock 963. Here Hugh gives us details of his success with the Lleyn and his Suffolk cross Lleyn.

Suffolk sires have been present at Pentre Farm for as long as I can remember. We have pure bred Suffolk ewes to breed rams for our own use. In 1983 we bought some better Suffolk ewes this was the start of our pedigree flock. Initially these pure bred rams were used on home bred Welsh half breds which were produced from Welsh Mountain ewes that were bought locally and put to the Border Leicester. When we tired of buying the Welsh ewe and her problems we continued to put the Suffolk onto the half breds which we had normally sold when they reached two year olds. Instead we kept them on, which was fine for a few years until we needed replacement ewes.

We bought Welsh Mules and various Texel cross ewes. The Mules where good sound ewes with lambs that 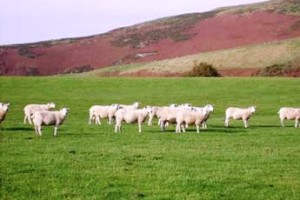 grew well, but we found it difficult to get the lambs to grade at 40 kilos which was very frustrating and uneconomical. The various Texel crosses on the other hand did rear lambs that graded well. They successfully reared singles but they were not as good at rearing twins. Those that did were prone to mastitis, although I have to admit we where pushing them to produce more milk to get the lambs away early. The alternative would have been to creep feed the lambs and not expect as much from the ewes. 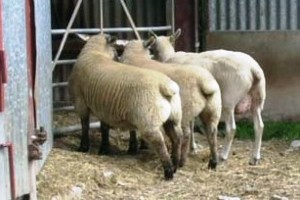 Bryan no longer owned a Suffolk ram and had no more ewes to sell. Our next move was a trip to Gaerwen, Anglesey to the Lleyn Sheep Society Sale to buy some Lleyns to cross with our own Suffolk rams. Unfortunately for us things did not go to plan, in 1997 Lleyns where way above the average commercial price, unlike they are now, hence we ended up buying only thirteen ewes, two and three year olds from Dewi Ellis (547). We began to realise the prospect of breeding Suffolk Cross Lleyns was not looking economic at that time hence we decided to invest in a Lleyn ram to enable us to breed our own registered Lleyn. A trip to Builth resulted in us buying a ram from Mr & Mrs T Rees (224). He was not the biggest but he was structurally very correct and the male lambs were easy to finish and at 40 kilos. We bought another forty ewes, the fact that his daughters turned out better than their mothers saved us buying a lot of sheep. In the end because we only used him on the bought in ewes we ran out of sheep for him, he had a fantastic set of teeth even after seven seasons. Every Lleyn ewe on the farm descends from him.
In 2002 we bought another Lleyn, that was a similar type of ram again not big from Alun and Helen 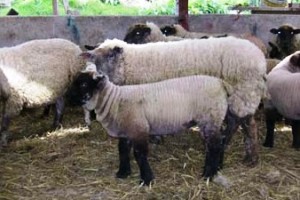 Bennett (893) which reinforced the type of ewes we had. In 2005 we bought the first son of 634/A15 from Emrys and Dylan Jones (599) who has just completed his seventh season. He has added length to our sheep. More lately we have relied on using our own homebred rams.

It took us a couple of years from when we first started our Lleyn flock for us to get back to our original idea of producing some Suffolk cross Lleyn ewes. Basically we take the Lleyn ewes we like least e.g. poorer conformation or pure bred faults and run them with the Suffolk .

Originally we had planned to have only a small pure Lleyn flock about 25% with another 25% going to the Suffolk and 50% of our flock would be Suffolk cross Lleyn. This has not happened, simply because the pure bred Lleyn lambs have exceeded our expectations. The male Lleyn lambs which are sold fat have been selling consistently in the same bracket as the Texel cross Mule lambs at Ruthin prime sales, which is better than the Mule and half bred male lambs. Never the less we have some Suffolk cross Lleyn ewes that are put to a Suffolk to get a three quarter cross Suffolk lamb, these are born in mid February a month earlier than any of the pure bred or half bred Lleyns.

We run on land used in a rotation with growing grass silage and grazing our mature beef steers. Unlike the Lleyn ewes we feed the February lambing ewes more concentrate. Twins get around 1kg/day for 6-8 weeks depending on the season but the singles are fed a lot less for a shorter period. The pastures are mostly 4 year high sugar leys with high white clover, because of this we do not creep feed any of the lambs as it is too costly and would give little gain considering the quality of the spring grass. We have had some reach 40kg in ten weeks, but usually twelve weeks is when we get the first draw. 2011 saw us sell nearly 25% of these early lambs for over £100/head. This is the first time we have had any February lambs sell over £100. This is much appreciated as the cost of rearing these lambs is higher than the Suffolk sired lambs off a Lleyn ewe which finish as quick off the grass. As the Suffolk Cross Lleyn naturally lamb earlier than the pure Lleyn the three quarter Suffolk lambs are purely to help our cash flow, it is essential that 90% are gone off the holding before the Royal Welsh Show week or they defeat the object of having them. Any ewes that do not perform are culled. Personally I am certain there is a huge market out there for Suffolk Cross Lleyns in direct competition to the Suffolk Cross Mule that is very popular in the UK . The Lleyn helps to give a more compact ewe that I believe is more suitable for Charollais sires and if crossed with Texel they will throw a white lamb. Although these lambs are three quarter Suffolk , without the influence of the Lleyn I would not contemplate putting a Suffolk on them. The most embarrassing aspect has been that the three quarter Suffolks are outperforming our pure Suffolks, which are born two weeks earlier and are fed for longer, this must be attributed to the Lleyns influence on vigour. 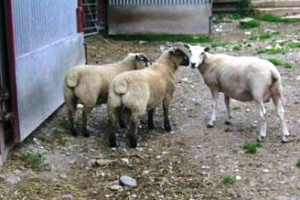 On this farm, ewes do not naturally take the ram as early as they do in other areas. Even our pure bred Suffolks do not conceive until late August. With the Lleyns grazing above 900 feet in late summer to autumn they do not conceive until mid October. This is not all bad as when the lambs are born, mostly within a fortnight there is usually some grass starting to grow. Clearly they know what they are doing! Using the Suffolk on some of the Lleyn ewes is useful for cash flow, the few ewes that have single ram lambs are given better grassland, and although they tend to be 2-3 weeks behind the three quarter cross lambs they are a lot more efficient. The majority of the Lleyns with Suffolk cross lambs are run on long term permanent pasture land 900 feet above sea level from late April running with the Pure bred Lleyn lambs. The ewe with the two Suffolk cross lambs that was displayed on the Lleyn 40 th Anniversary stand at the Royal Welsh Show in 2011, was in that group up until three weeks prior. We do not creep feed any of these lambs, the aim is to get the Suffolk cross lambs away by September before the rush. About 50% of the Suffolk cross ewe lambs will be kept for breeding .

My number one objective in breeding a Lleyn ewe is to breed an efficient ewe that is around 60kg in weight and is capable of producing two 40kg lambs, pure Lleyn or Suffolk cross. Vitally important is that when those lambs reach that weight, they have flesh on them to grade. This is something I call 2/3 ratio, meaning a ewe is 50% heavier than each of her finished lambs. I see no point in breeding big framed sheep the size of a 'donkey' that produces lambs that are still growing and not laying on flesh when they reach 40 kg. I do not want sheep with long legs, that have broad shoulders and a long neck or a strong brisket, there is no sense in going in this direction. The money in the meat market is always at the rear of the lamb. It seems odd to me that farmers quite rightly will put their faith in smaller compact terminal sires like the Beltex and Southdown yet cannot see the benefit of a smaller framed ewe like the Lleyn. At the end of the day I believe you have to breed sheep suitable for your own farm and on better ground than ours the Lleyn will naturally grow bigger and stronger, in my view this does not make them genetically better sheep.

For over a decade the only sheep that we have bought on are stock rams, and more recently most of the rams used Suffolk and Lleyn are in fact homebred. This system is not likely to win us any beauty contests but it gives us a better chance of avoiding genetic faults that we might not be aware of with a bought in ram. I personally believe if you want to improve your sheep at the top end of your flock, you need to buy in new blood lines at some point. Good home bred rams are a good way of improving your flock at the bottom end and middle, or gaining more consistency and uniformity.