Paul and Alison Bowen moved out to Eymoutiers, France in 2005. They bought the farm complete with sheep. They decided to continue farming as the previous farmer had but soon realised that there were improvements to be made. Over the five years they have amended the system to suit their needs. They have now got their feet on the ground and are a lot closer to where they want to be with the enterprise. The main change they have made is lambing only 2 or 3 times a year instead of 8! Yes 8! Paul says they were all “brebis du pays”, a real mix of breeds and crosses.

Paul studied at agricultural college and has always dreamed of owning his own farm one day. The cost of 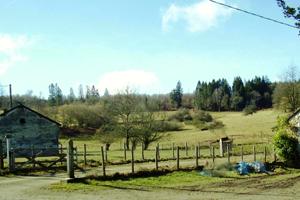 farms in the UK made this a very unlikely dream but France has made it a dream come true. Before moving he worked on an Estate on the Shropshire Staffordshire border where they ran a Lleyn flock. Paul was always impressed with the breed. Alison says “we knew we would always have Lleyn” and within 8 months of arriving in France so did their first Lleyn ewes.

The Lleyn ewes were purchased from a gentleman in France. He had imported 300 ewes back in 2004/5 from Mr Greg Parkhouse. Paul had met Greg at agricultural college where they established their common interest in the Lleyn. Alison believes that they had found the stock before the farm.

The farm is 750-800 meters above sea level with wonderful views. It is quite wet in the spring and autumn which helps the grass not to burn off in the summer. The winter is as you would expect in Britain, although they have not had as much snow this last winter. The summer sees temperatures of 34-38 degrees (OK Alison, there is no need to rub it in!), that means that work is done early in the day and later into the evenings, (I suppose that means siesta and wine in the middle of the day). They have plenty of good thunderstorms and showers to ensure a good crop of grass. To help make sure the grass is kept in good conditions they have the soil tested every year and take the necessary actions. They have 133hactres of pasture with additional woodland and marshland. The Lleyn does well for them, Alison feels part of the reason for their success with the Lleyn is the terrain and the fact they are located so high above sea level. 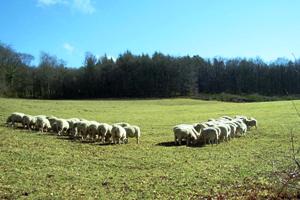 At present they have 100 ewes and 50 ewe lambs and have sold stock for breeding. They are frequently asked to sell their ewe lambs but in these early stages are trying to increase their own numbers although they are aware that by increasing the numbers in the country in the long term they are helping the promotion of the breed for future breeding markets that they may well need. They have sold rams into the Tarn region and ewe lambs to Northern France, with the early reports being promising. Unlike over here most French farmers want lambs all year round. Here the Lleyn ram is making great headway as they work well throughout the year, even the intense heat of August cannot slow these boys down, unlike other breeds who suffer with the heat.

Lambing at Le Mont takes place from early January. The Lleyn cross ewes lamb in the Bergery and the lambs are weaned at 10 weeks of age and are sold from 14 to 16 weeks. They are finished in the Bergery and ready for the Easter market. All the lambs go for the Easter trade because the price is at its best, reaching 6.50€. They are sold to the cooperative for butchery.

The co-operative, “Elever du Pays Vert” is a large 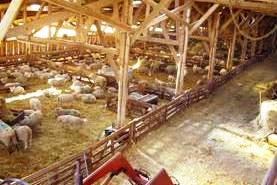 independent group which carries the quality labels “label Rouge” and “Le Diamandin” on all their lamb. “EPV do more than just buy our lambs” quoted Paul. He commented on how the rules, regulations and the demands of farming in France are very different, and difficult to describe on paper.

The pure bred Lleyn lamb in mid April. The females are kept for replacements and they are able to sell the male lambs into the early Christmas trade, again achieving a good price. Lambing in an outdoor system, the lambs are weaned at 12 weeks of age and are finished on grass. If lambs get over seven months of age they are penalised on the price.
Pre-lambing the ewes are fed a ration of oats, protein pellets and lucerne pellets with molasses. They have successfully seen lambing percentages of 175-185%. Alison reports there is a lot to the way they farm in France that is “very different to the UK.”

The ewes are over wintered away on a mix of marshland and hay fields. They have access to hay and crystalyx high energy buckets. The Lleyn is the only breed that have been content to thrive on this land. They have put other stock on the same ground in the past but have suffered the consequences. They believe the key is down to the Lleyn’s higher tolerance to internal parasites. Along with their tight fleece and good feet which means that less time is needed to catch and treat. They thrive naturally with little input. 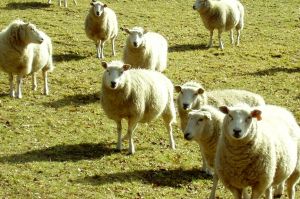 So what does the future hold for Alison and Paul? They aim to build numbers up so that they can sell breeding ewes and rams. They run the Easy Care too and intend to run the two flocks side by side, they do not want to cross the two breeds. Alison stresses, “The point of having the Lleyn is that they work for us and could for other farmers, so why change it?” Their other ambition is to show at the regional shows which will help them promote the breed.

Alison summed up their experience with the following statement, “We are both from farming backgrounds in one way or another and when you feel that you are meant to do something and it feels right, there is a sense of achievement and a small victory that cannot be ignored.”