In the N. Ireland sheep industry, the name Edward Adamson is associated with the National Sheep Association.  Edward has been involved in the NSA for many years and is a past chairman, taking on the role of regional secretary, on a temporary basis, over 25 years ago.  This has evolved and is now N. I. Development Officer and Regional Manager, representing the interests of all sheep farmers throughout N.I. at both local and government levels. In N. Ireland the NSA Sheep Centre at the RUAS Balmoral Show and the bi-annual NSA SheepNI Event at Ballymena Livestock Market are organised by Edward and the committee members. He has represented the UK on behalf of NSA in Russia, New Zealand and many European Countries and been involved in hosting Inward Missions from other countries. In 2008 he received the NSA Unsung Hero Award (Now named The Bob Payne Award) for his work with NSA and in 2016 was awarded an Associate of the Royal Agricultural Society (ARAgS) for his work for the sheep industry in N. Ireland.

He farms in partnership with his son Stewart on a total of 350 acres, a combination of owned and rented land. The farm is situated near Carrickfergus on the shores of Belfast Lough. Edward comments that their townland Kilroot punches away above its weight as it is small but contains Kilroot Power Station, Irish Salt Mines and our farm. On a clear day the coast of Scotland is clearly visible but that also means there is not a lot of shelter when the wind is blowing from the East. 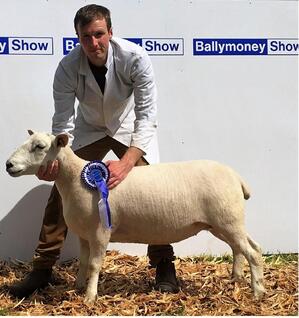 A small flock of sheep was always kept on the farm but after Stewart came home to farm the decision was made to cease dairy farming and the sheep flock was increased. Several breeds mostly maternal are kept with the Lleyn numbers constantly getting larger. As they do some farm contracting and with Edward’s role within the NSA they needed to have sheep breeds and system which was not too labour intensive. In general, they feel that the sheep of the future will need to be able to survive on lower labour requirements as the cost of labour is getting prohibitive, hard to find and unsustainable.

Edward and Stewart focus on producing female breeding stock with most being sold privately off farm to repeat customers. They feel satisfied that the stock must be performing well as customers return regularly for replacements. They are also members of The CO OP Lamb Farming Group which is supplied through Dunbia and are annually audited by the CO OP as well as being members of the local Farm Quality Assured Scheme. Edward says, ‘Our customers expect their food to be top quality and if we are to survive in whatever market is ahead of us we need to prove ours is the best’.

Edward quotes work done in several sheep producing countries which shows that the focus and recording of terminal sires will improve profit per lamb by £2-£3 whereas selection on the maternal side could increase income by as much as £20 per ewe. This is where the Lleyn excels with her ability to be prolific, lamb easily and produce enough milk to rear her lambs well. These are the traits that lleyn breeders need to keep in mind if the breed is to keep on growing at the pace it has done in recent years. Commercial farmers trying to earn a living from sheep need hard working ewes that do the job out in the field, they are not interested in ‘prima donnas’ that just look pretty. 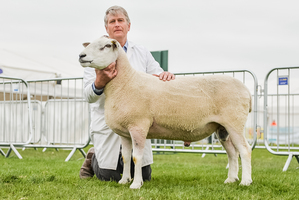 Since Edward has become more involved with the breed he now serves locally as Regional Chairman and has been N. I. representative on the Society Council for several years. He is also on the Breed Development Sub Committee and in 2019 is expected to take over as Chairman of this Committee. He sees this as a formidable challenge, not only to follow the work of the present Chairman but in trying to keep the Lleyn breed the choice of modern and progressive commercial sheep farmers.