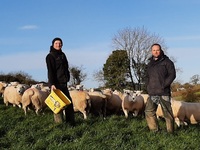 The Morgan family have been farming their lands in Jerrettspass outside Newry for over eighty years.  For most of that time, the farm’s focus was on producing milk for local dairies along with chickens for the laying egg market up until 1995.  When James and Austin took over the farm from their parents in 2010, they faced the common challenge of how to balance the continuation of family’s farming tradition with their off farm employment.  James works as a heating engineer and Austin is an Electrical Engineer.  Their solution was to end the dairy and poultry elements of the farm and focus more on sheep farming and a suckler cow herd.

James and Austin always had an interest in sheep from an early age, learning about them from their father Jim who had bred both pedigree Suffolk and Texel sheep for over 20 years.  The Morgans ‘Drumiller’ pedigree Texel flock had numerous success over the years, but given the regular oversupply of the breed for sale and the difficulties can often be found with lambing Texel sheep, James and Austin decided to change their breeding operations.  They were looking for a sheep with reduced mortality rates, increased lambing percentage and a flock that would be less labour intensive than what they had previously found.  The breed of sheep that they considered fitted the bill was the Lleyn. 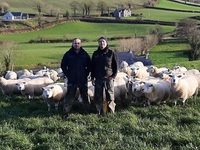 The Morgans purchased their first Lleyn sheep in July 2014 from Robert Edwards flock (1513) for Embryo work in their Drumiller Texel flock.  Having seen the benefits of the Lleyn breed lambing in the spring, with little or no lambing assistance required they decided to increase their Lleyn flock by buying aged ewes and ewe lambs from Hugo Warden’s flock (1441).  In 2016, the Morgans decided to stop breeding and producing pedigree Texels and changed to crossing their pure bred Texels with a Lleyn ram.  Indeed some of the sheep that originated from their father’s early flock are now being used for cross breeding with pedigree Lleyn rams to produce quality, commercial finished lambs and quality replacement ewe lambs for both their main flock or for private sales.  Their breeding programme was boosted by the purchase of their first Lleyn ram in the Ballymena Society sale in 2017.  He runs alongside the boys’ Charollais ram which serves both Lleyn and Lleyn cross Texel ewes.  The Morgan boys’ most recent purchase was fourteen shearling ewes from Aidan McConville’s  ‘Glennview’ Flock (2002) in September 2019.

The Morgans run around ninety ewes and keep twenty replacement ewe lambs for retention or for private sale.   They also run a strong beef suckler cow system which consists of Simmental cross Limousin cows, either AI or naturally served to Limousin bulls.

The Morgans emphasised the importance of grass management on the family farm.  They ensure that the fields are regularly ploughed for grass mixtures or stubble turnips every five years.  This system works well for them with the Lleyn flock, with most lambs finishing off grass without little introduction to meal. The Lleyn and Lleyn crosses regularly finish off grass around 42 kg live weight which are then sold either in the local livestock Market or private sales of females.  The Lleyn ewes are mostly lambed outside starting in mid-March depending on the weather conditions.

When asked about their experiences as a new Lleyn breeder, the Morgan’s had much praise for the breed, with James saying, “There are huge advantages compared to the breeds we used previously - the ease of lambing is a big thing and they produce plenty of milk.  They prefer to be outside and the health benefits are there to see.  I could go on and on but the bottom line is that they do the business by making more profit in terms of lamb production and grazing per acre.”  James did express one regret in relation to the Lleyn breed however.  In recalling that his neighbour and fellow breeder Aidan McConville had advised him years previously to buy Lleyns, James laughed and said, “I wished I had taken his advice sooner”.