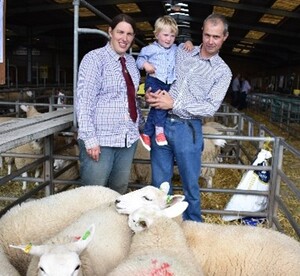 Whilst at school and with an ambition to farm, Phyl ‘wagged a day off school’ and attended the Society sale at Ross on Wye where she purchased her first three sheep. With a limited budget she bought the best sheep she could afford and has worked hard over the past twenty years to improve them, noting that her Three Counties Show Champion mentioned later was a descendant of these. Even back then Phyl says she chose the Lleyn because she wanted a ewe that would wean two lambs easily and be a good mother, easy to keep with the ability to run a closed flock.

Phyl now farms with her husband David and young son Danny, aged 4. Phyl is very much responsible for the sheep enterprise with Danny as an apprentice shepherd. David works full time for a contractor. They currently run 125 registered Lleyn breeding ewes. They also buy in up to six store cattle for finishing each year.

Before settling down, Phyl worked full time milking cows whilst renting land around the Forest of Dean and Ross area enabling her to lamb about 100 ewes. The couple moved to Kents Green Farm six years ago. Having previously been used for arable it is now all permanent grass, they found that much work was needed to replace the nutrients in the soil. “We did a trace element test on the soil a few years ago and it showed deficiencies in cobalt, selenium, copper and zinc while magnesium levels were too high. We have rectified this by applying specially formulated compound, the land has improved beyond recognition. Lambs hold their finish far better and look brighter and healthier”. 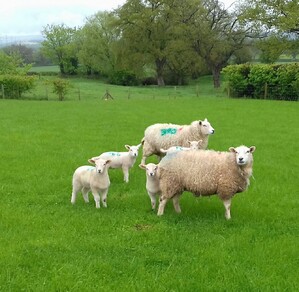 With a hectic family life, the objective is that whatever they do must be easy and manageable. They do not farm organically although they do not use fertiliser and are extensive in the stocking rates. “We could increase our stocking rate by using fertiliser but the extra costs don’t add up”. Phyl is very open in her beliefs of a grass-based system. She notes “I believe that sheep and cattle were put on earth to convert forage into protein for us.” She describes the farm as “grass growing” with the Lleyn an excellent convertor “We don’t believe in buying in feed. The early lambers may get some but that will be it”.

Hay and haylage are produced on farm and fed from December onwards. The later lambing flock is sent away to grazing from tupping time, returning in January. Ewe lambs only receive additional forage if the winter weather sets in otherwise, they have to be self-sufficient.

The first batch of 70-80 ewes are lambed inside during February. They have scanned at 195% this year. The rest lamb from mid-March into April. It would be preferred to lamb these outside but due to an increase in issues from predators such as foxes and badgers, inside lambing is undertaken. 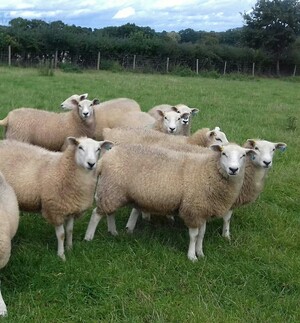 Every lamb produced is purebred with the aim to breed a couple of rams to register and sell on. Approximately 50-120 ewe lambs are kept and registered with the aim to sell half as shearlings. Phyl is an annual consigner at Society sales with the Ross on Wye sale being her local. All other lambs are finished on grass and then sold off the farm, ideally by the end July before any droughts kick in and grass disappears. They either go to a local market or dead weight to Farmers Fresh. A small niche sees some lamb and beef sold locally in boxes.

Choosing to run a closed flock means that only rams are brought into the flock. “I look for a good top line, sound legs and pasterns with a bit of style to help produce eye catching females for the sales when selecting a ram. A sound mouth and breed points are also very important. This method has worked as the rams are always keen to work and last very well.”

Phyl has detailed parentage records from the beginning. “This helps me identify any lesser performing ewes and helps to manage prolificacy by selecting the best performing breed lines”. Phyl is also participating in LLEYN GOLD, a tool helping to provide maternal information to aid selection decisions. 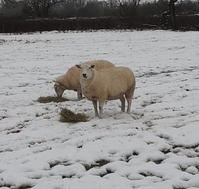 Phyl has been an active member of the Midlands Lleyn Breeder Club which has seen her stand as Chairperson as well as Secretary for 8 years. She has been awarded the Club Champion Flock, the only flock to win as a small flock and then go on to win as a large flock several years later. In 2019 she won the best ewe lamb category. Phyl can often be seen in the prizes for both ewe lambs and shearling ewes at the Ross Sale.

With her Wye Valley Lleyn prefix, she has been on the show circuit with the highlight winning overall Lleyn Champion at the Three Counties Show in 2015. She has also had much success at many other one day shows in the Midlands.

The future of the farming industry is very much on the Hale’s minds, with uncertainty around the ELMS payment scheme possibly seeing some farmers moving to part time. “If this is the case, the Lleyn is well placed as the breeding ewe of choice as she is easy lambed, milky and an attentive mother, all useful traits if you are not able to be on hand full time.” Farmers moving to larger more intense operation will also

benefit from a ewe that knows her job. Phyl’s own personal experience from the early days of renting up to 14 miles away meant that overnight the sheep were left to get on with it “I don’t think any other breed would have looked after me so well”.