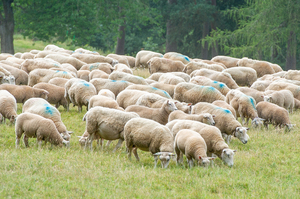 When you think of JCB, I am sure you think of the big yellow machines but the owners, the Bamford Family also have a very successful farming enterprise just outside Stoke on Trent near to the famous theme park of Alton Towers. They own two estates which are both farmed organically. Richard Smith with the support of John Reid oversee the farming side of the business and implement the farming policy for the family. Covering 2,300 acres they farm 2,200 Lleyn ewes (200 form the nucleus registered flock), 110 beef suckler cattle, red deer, arable and a chicken fattening unit plus hatchery. They also farm a further 1,250 Lleyn ewes at Daylesford in Gloucestershire. Using the on-site abattoir, the primary goal of the flocks is to produce a consistently high-quality product year round for Daylesford Organic.

Daylesford Organic’s founder is Lady Bamford (Carole Bamford), and the Daylesford ethos is based around 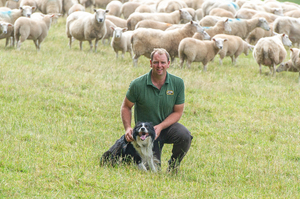 the sustainable production of high quality, honest, transparent food. Over forty years ago, the Bamford family turned their farm land over to sustainable, organic farming. What Carole Bamford began as a simple passion for real food and a desire to feed our children better has grown into Daylesford as we know it today, one of the most sustainable organic farms in the UK with a farm shop in the Cotswolds and 4 farm shops in London.
The sheep are overseen by two full time shepherds, Matt Haydon and Paul Smith. Matt currently sits on the Society Breed Development Committee and is a past NSA Young Ambassador. Matt has been with JCB for four years whilst Paul has been there 20 years. Paul looks after the more commercial side where Matt has taken more of a lead in developing the registered nucleus flock.

Spread across the two farms the land runs to 1000ft ranging from productive lighter soiled ground to some very unproductive limestone land high up which can only be used for grazing stock.
Matt notes that there have been Lleyn at JCB for many years, the decision was taken in 2014 to produce registered stock “with a view to improving genetics within the whole sheep enterprise whilst having 100% ownership of our genetics”. 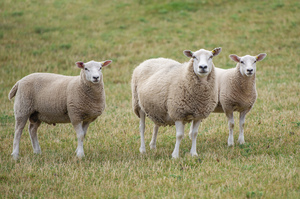 The Lleyn fits the organic system, enabling lambs to be finished off a forage fed diet of clover rich leys, forage rape and kale crops for 12 months of the year. Matt notes that as breeders we must remain aware of our market place and what the end market dictates. Matt is keen to keep the Lleyn as a medium sized ewe to maintain the efficiency of the flock. To help with the all-round year supply, most ewes are bred pure, but some early ones are put to the Hampshire to aid early growth whilst the ewe lambs are put to the Ryeland for later lambs.

“I enjoy using the Lleyn as it gives me the quality carcase I need whilst also producing breeding replacements with great maternal traits especially plenty of milk”, says Matt.

The flock is run closed hence no females are brought in and only occasional rams to encourage new bloodlines within the nucleus flock. “I look for growth rates and maternal traits with increasing interest in selecting for worm resistance when I go to purchase a ram”. Matt strongly believes in EBV’s as a tool to help him select the right genetics to improve the flock whilst also looking for true to type and “with a leg on all four corners”. Efficiency is key to this large scale operation hence they are not looking for the biggest ewes “it’s all about the end article, I look for ewes that can wean as near to her body weight i.e. 70kg ewe would ideally wean 2 lambs at 35kg each”.

The stock for the foundation flock was originally sourced from the Midlands area, looking for flocks with similar objectives. Further stock was sourced from society sales at Ruthin and Carlisle, to enable them to get a mixed variation from different geographical areas. “I believe sourcing from different areas geographically has helped with a more varied gene pool and has put us in a stronger place with selection criteria today. When we first set out selecting sheep, we thought we would use EBV’s as the main criteria, however it proved more beneficial to select for type and figures rather than figures alone”.

Lambing takes place indoors from the beginning of April as we are waiting for the later grass growth in the area. The later tupped ewes and ewe lambs are lambed outdoors from mid-April. The ewes are housed about 10 weeks prior to lambing, when they also winter shear them making it easier to assess body condition. They are fed using a TMR ration which is mainly silage based utilising high-quality red clover in late pregnancy. For outside lambing they run on grass leys with organic feed buckets. Matt notes their ewes are preforming well, scanning at 190-200%, (gimmer lambs 120%). Average rearing is about 1.7 lambs per ewe.

Recording is done using the Border software system linked to a XR500 weigh which works on the Pratley system with auto drafter weigh scales. “We have found that recording as much information as possible within the nucleus flock is giving us the best possible opportunity to improve across the whole enterprise”. One of the objectives is to breed high index rams to sell but also to use across their own commercial flocks. “On the commercial breeding stock we use a simple system of weight gain at 8 weeks. By targeting this growth point through historic data, it is showing that if sheep are performing at this point, they tend to become the best performing sheep in the flock”. Further scrutinising is being done on feet and FEC scores for worm resistance. Matt strongly believes that this work has filtered down into their commercial flocks and they are now using less anthelmintics/wormers.

Matt sees much change in the future of sheep farming. The team at JCB are focussing on the positives, 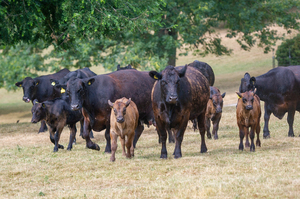 aiming to build on producing the best produce to the highest of standards whilst listening to the customer. “Here at JCB we pride ourselves on the livestock we produce from sustainable farming methods, with emphasis on producing meat from forage fed green diets”. Always keeping their eye on the pulse, Matt noted the recent growing negative campaigns on social media towards the meat industry “we really do have to go that extra mile in selling ourselves as guardians of the land. Highlighting the meat produced within the countryside which ends up on the supermarket shelf has a positive impact to the landscape and environment.”

Matt is sure the Lleyn is the right breed to help the business move forward “The Lleyn is a hard-working ewe with a big future. With changing times ahead, the Lleyn has the right attributes to adapt to many farming systems” Matt.