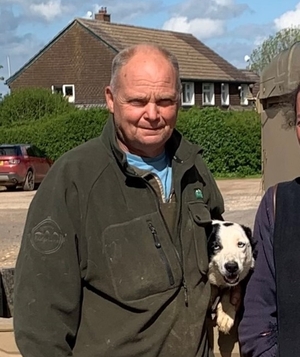 The Leighfield flock of Lleyn which is part of the Wills Estate, Rutland in owned by the Allen Family.  Trevor Border who has worked there for 32 years is the Head Shepherd.  Across 1,750 acres of Leicestershire countryside, he runs 1,000 commercial Lleyn alongside 200 registered Lleyn ewes.  Approximately 400 acres of the estate is woodland and cover crops.

The Estate Management decided to move the farm from arable to grassland in 2004 with sheep being chosen as the viable option.  At first indoor lambing was trialled with a mule flock.  Experimenting with outdoor lambing saw a purchase of a small number of Lleyn from Ross on Wye Mart.  They were lambed outdoors in May and proved very successful hence the numbers were increased.

Lambing continues to take place in May on a low-cost outdoor basis.  The scanning rate is around 180%.  Hay is fed in December and January outside.  All sheep are housed for approximately a month while scanned and sheared.  They are sheared with a cover comb (i.e. leaves 10mm layer of fleece after shearing) to protect for the first 48 hours.  Trevor says “We shear late February/early March depending on the weather.  If we didn’t do them at this time, they would be done late June/early July when maggots can become a problem.  We find that shearing with lambs at foot can mean more stress and labour, this is the best thing we have done for outdoor lambing in May”. 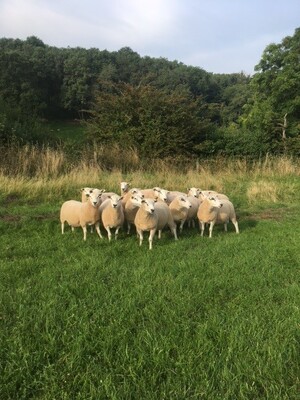 Trevor reveals a huge mantra across both the commercial and registered flock is production with minimum input.  All sheep are run as one with no additional feed used.  Grass is key!  A tool used to help achieve the flock’s goal of efficiency is Signet Recording.  The flock are members of the Performance Recorded Lleyn Breeders group.  Trevor strongly believes that by using EBV and FEC (faecal egg count) information he is able to select sheep that perform on the grass-fed system.

200 registered ewes make up the nucleus flock which breeds replacement rams and females.  Firstly for the flock but also for onwards sale in the autumn.  They can regularly sell 15 – 20 registered rams each year.  The Leighfield flock has found a sound market for commercial breeding females which much of their own marketing done and many returning customers on the books. When asked why customers return, Trevor reports “Customers come back because our sheep are bred to work off grass alone.  We have data to back them up.  Another strong selling point is being a closed flock and being able to offer large numbers from one location.”  When selecting females for flock replacements Trevor looks for a good straight leg in all four corners, tight coat, conformation and the ability to achieve this off grass alone.  The only animals bought in are stock rams, bought off farm with performance data to help back up what he sees.  “Good EBV’s and FEC’s alongside conformation and I want to be able to see it is doing it from grass.  It is good to see a willingness to work but also longevity” says Trevor.

In the commercial flock they are using the New Zealand Texel over the Lleyn ewes, the Lleyn is then put back over these females.  Recently they have been experimenting with the Tefrom, a composite breed developed in New Zealand from the Texel, East Fresian and Romney.  It remains early days to discuss results but good growth has been noted.  The females will be kept to see how they perform.  The crossbred out of the Lleyn is then put back to the Lleyn to retain the hardiness and maternal traits.  Trevor notes “the Lleyn is a good all round sheep which is very efficient, hardy, long lived and does very well on our grass system.  It can produce a good type of lamb when crossed with the terminal breeds”.

With the commercial flock they aim to sell lambs off grass at 18-20kg on a deadweight system.  Some heavier lambs will be sold live weight.  They start selling lambs at the end of August and without feeding have a steady supply through until April. 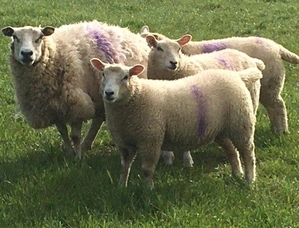 With the topical talk of climate change, Trevor believes he has the business in a strong position.  “For the past ten years we have worked hard to build a low input, high output system.  We moved into the mid-tier Stewardship Scheme to mitigate the downturn in BPS payments.  Part of this sees the introduction of herbal leys to help cut down on the reliance of imported Nitrogen.  Also providing a diet that finishes lambs quicker than the standard grass-based system. I believe we can stand on our own two feet when the subsidy payments have gone.  We are running a low stocking rate alongside better grazing methods of old pastures generating a lower carbon footprint.  We have reduced medicine use hence antibiotics and wormers.  Sheep concentrates have been removed.  We don’t use Nitrogen fertiliser, we use a swardlifter and aerator.  A little chemical spray is used to control weeds such as thistles and nettles”.  Also putting the flock in a strong position is the closed flock element and push for efficient ewes.