Lleyn Being Noticed on Marginal Land 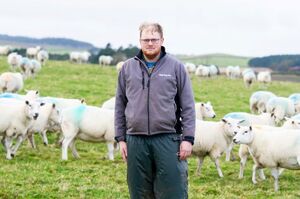 As you drive through the idyllic North Durham countryside looking across the moors which is dominated by traditional hill bred sheep you may be surprised to suddenly find a flock of Lleyn ewes with North Country Cheviot lambs at foot.  Owned by the Barron family consisting of Richard and Jean Barron along with son Shaun and his partner Georgia Brawn who farm the Deans Farm, Muggleswick, Consett, Co Durham.  Shaun Barron commented we have found the Lleyn performs equally well if not better than traditional hill bred sheep on our high exposed farm.

The Family have been at Deans Farm for thirty years and the other farm in the enterprise being White Hall which has been in the family for fifty years.  The total acreage of the units are 570 acres running from 800 to 1100 feet. The livestock on the farms consist of 220 Lleyn Ewes, 260 Swale Ewes, 25 Bluefaced Leicester Ewes, 100 Mule Ewe Hoggs, 90 Pedigree South Devon Suckler Cows.  There is 400 acres of SDA (severely disadvantaged) grassland, 150 Acres of moorland, with average rain fall of 30- 40 plus inches, and clay soil. 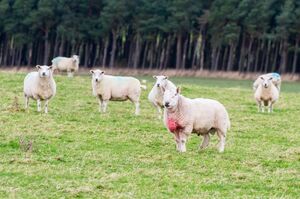 The Lleyn flock is kept outside on grass throughout the winter with hay offered during poor weather conditions.  Minimal concentrates are given pre and post lambing according to scanning results.  The Barron family like the Lleyn as they perform well outside on good quality grass areas on the farm which has been conserved in late summer and autumn.

Richard Barron commented “we like Lleyn ewes as they are great mothers that milk well with the lambs growing quickly which means we can sell the wether lambs at 14 – 18 weeks at between 40 – 45 kg the lambs always sell well at Darlington Mart as they are white faced with tight skins – this fits into our commercial sheep unit as it means we can sell lambs earlier than from the traditional hill breeds”.

The jewel in the crown for the Barron team is the North Country Cheviot cross Lleyn ewe lambs. Shaun said “we have a demand for these ewe lambs from regular buyers as they perform well on lowland units when put to any terminal sire, the ewe lambs are great mothers being prolific, milky, with tight skins”

The Barron’s plan is to expand the Lleyn flock and breed their own replacements as at the moment ewe lambs are purchased privately from a local breeder, which are not put in lamb and brought in to the flock as shearlings.  Lleyn are also purchased from Society sales to replenish the flock.

Shaun said “we are very much a family run business with everyone contributing to the success and management of the enterprise.  Our Lleyn flock tends to be a talking point among neighbouring farmers with traditional hill breeds but since the first Lleyn arrived eight years ago, more people are taking notice how well they perform on our marginal land.