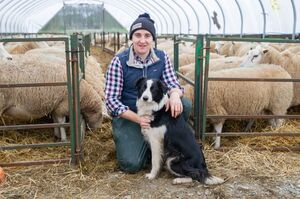 Alister Watson farms at Williamwood, Kirtlebridge, Lockerbie, on his parents 300 acre farm where a Lleyn flock of breeding sheep is key to this progressive young farmer success. The farm is a low-lying unit with a Lleyn flock of 250 Breeding ewes 80 ewe lambs and 15 Tup lambs.

The land is wet heavy clay soil, winters are tough and rain seems persistent. The farm however stands droughts in the summer very well and when the weather does warm up grass grows well.

Rotational paddock type grazing is used for the sheep and reseeding is done using high energy dairy type grass varieties, after reseeding all lambs are finished on the clean grazing.

Alister said “after leaving college and moving from the east to the west our old stratification system of Blackies and Mules didn’t fit and replacements were having to be bought in annually and I wanted to start up a self-replacing flock of sheep. I had considered many breeds but the Lleyn seemed to suit the farm perfectly by being both hardy, maternal and having the ability to be crossed with any terminal sire, the Lleyn also possesses longevity and a 7/8 crop ewe is not unheard of in the flock.

Recording plays a huge part of Alister’s sheep business, he said “if you don’t measure you cannot manage effectively as many decisions are made from recorded data. I record everything including body condition score of the ewes, weights of ewes and lambs, Carcass conformation and kill out percentage of progeny, desirable traits and less desirable traits such as bad feet. All lambs are tagged weighed and recorded at birth, they are then weighed at 6 weeks when they are in for their first clostridial vaccination and then after each time they are in for treatments or selecting prime lambs. Ewes are also weighed at weaning and pre tupping. Alister commented “between 2017 and 2020 I have been able to reduce average days to slaughter by 52 days by selecting for desirable traits, this means for every 100 lambs this equates to an astonishing 5200 days less on farm, this has reduced grazing pressure and a knock on effect we have more available grass for ewes to achieve full condition pre tupping. As fertiliser and other inputs rise significantly, I can see efficient ewes such as the Lleyn become more popular as they lend themselves very well to many farming systems. Health planning is very important and Alister works very closely with his local vet (Dryfe Lockerbie) and MSD to ensure the health of animals is as good as possible.  All the sheep and lambs are in the CORE vaccination program with MSD which has driven ewe performance by reducing overall mortality and has ensured the flock stays well below national average. 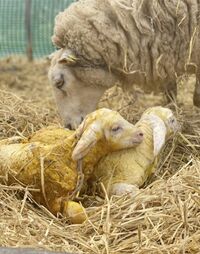 Over the past 12 years of having Lleyn Alister has tried many different tups for producing prime lambs, he single sires each group for management reasons.  Breeds used include Abermax, NZ Suffolk, Texel, Beltex, Berrichon, and Charmoise. Data is collected to compare tups and over the years it has found some breeds may gain a premium for a fat lamb but they also may have a higher mortality through a whole host of variable reasons so realistically the premium gained has been lost due to less lambs on the ground. At the moment Alister uses a Berrichon on ewe lambs for an easy lambing, and fast-growing fat lambs and uses a Beltex on the “B ewes” which for whatever reason are not good enough to go to the pure tup. Alister commented “I feel I prefer having a small B group rather than selling them as draft ewes as they still do a job but just don’t have the desirable traits for the higher quality breeding female.

The Lleyn Tup is used to produce replacement females with 70 plus ewes put to the tup. Over the years Alister has selected the ultimate sheep for his farm and he intends to sell some gimmers, ewe lambs and shearling tups in 2022 after many years of development.

Ewes get only silage with additional molasses depending on silage quality until 6/8 weeks prior to lambing they are then housed, sometimes they are housed from January it all depends on the field conditions, this also ensures the ewes get a break from parasites and gives the fields a rest. Post lambing the ewes get a concentrate in the field until there is enough grass to sustain the ewes needs then just grass as the Lleyn can easily rear the lambs on grass alone all lambs are also finished of grass.

Cross lambs are all sold dead weight through Farmstock Scotland, fat lambs start from 96 days old and are all

sold before the tups go back out in October. Alister said by selling them with Farmstock Scotland “I can rely on them to market my fat lambs ensuring they go to the best possible abattoir and receive the best price on the day. I also like having individual grades and weights that I can use do determine kill out percentage and make management decisions.”

When purchasing a Lleyn ram Alister prefers to buy recorded tups either by Lleyn Gold or Signet. Alister said “I feel you get to see how the tups will ultimately complement the ewes they will serve. I look for naturally done tups with good size and conformation. Conformation and size is important to me as that’s what we all get paid for as fat lamb producers.”

Alister purchases replacements from Carlisle Lleyn Society Sale, as it is thirty minutes down the road and he can guarantee there will be a strong show of stock to pick from. Foundation ewes came from Carlisle bred by breeders Laneside, Poledean, Anston, Incheoch and Goldie. Some were bought by data driven decisions and others for style.

Alister said “breeds develop and adapt and the Lleyn has certainly done this especially in the last 20 years. Between 2012 and 2020 the Lleyn national population has risen by 29,000 ewes equating to just under 4% of the national flock”. Alister urges farmers who are considering trying the Lleyn as a commercial ewe to definitely give them a go as in his words “they meet all the requirements for producing profitable prime lambs” 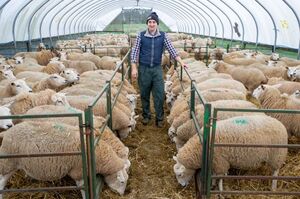 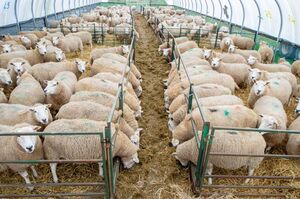 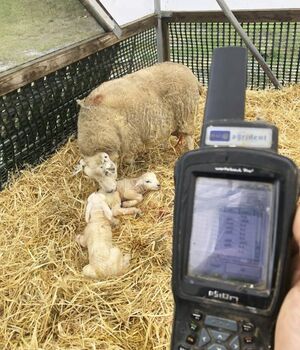