Fallen in Love with the Lleyn 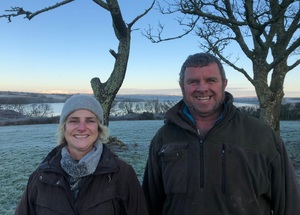 Darren and Sarah Searle are first generation farmers who started off with sheep as a hobby, but it has now become a serious enterprise. After getting married five years ago they moved into Carnebone, situated in South West Cornwall. With a mixture of owned and rented land they have 32 acres plus 85 acres of winter keep. They are running 70 registered Lleyn ewes with a further 80 which include ewe lambs and ram lambs which are being kept for replacements and for sale as shearlings subject to further selection.

Previously Darren was contracting and growing potatoes and brassicas for the major supermarkets, in West Cornwall. With a desire to step away from this high-pressure life, he set up his own business, Countryside Contracting which undertakes fencing, landscaping, and contracting. Darren says, “Sarah is a self-confessed townie with a good eye for sheep”. She works locally in retail management, taking time off for lambing and showing when needed. Both are keen to see the shows again after the cancellations of 2020. 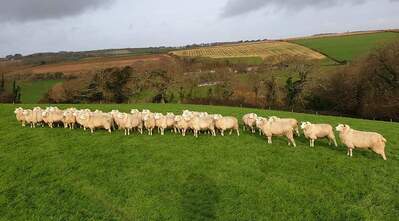 One of their first tasks was to pull the farm around as it was very dilapidated and overgrown with a lack of livestock proof fencing. Darren reports “we have reseeded all the fields and fenced most of it, as a fencing contractor it stood to be a poor advert if I didn’t.”

The passion for sheep farming started back in 2014, with 3 acres they made the decision to purchase their first sheep, 14 aged Lleyn ewes from Robin James. Having put them to the ram but with no knowledge of sheep farming they underwent a learning curve and saw the arrival of 37 lambs the following spring. 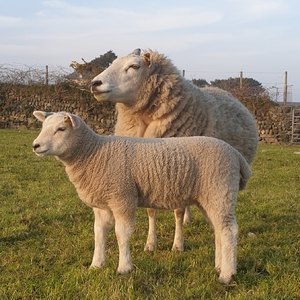 “Each year we have kept ewe lambs for replacements, slowly growing the numbers. We are concentrating on getting our flock to the best standard we can for ourselves but also for the stock we sell”. They have decided to stay with a purebred registered flock and concentrate on producing high quality registered stock for sale.

The ewes get a flush of grass for about ten days before the ram goes in with the aim for lambing time to take place from the last week in February. The farm location gives plenty of early grass growth to turn the ewes and lambs into. Depending on body condition, weather and grass levels, the lambing ewes get some concentrate about 4 weeks before being due. The ewe lambs that are away on keep get no concentrate feeding. All stock receive a mineral bolus each year and are in the Heptavac P-Plus system. The ewes have scanned at an average of 215% for the past five year.

The main aim is to sell some shearling ewes each year through the Society sale at Exeter. They have also in the past three years produced a small number of shearling rams to sell. With focus on quality, they select hard and are keen to do this rather than aim for numbers. Anything not kept for breeding potential is sold as prime at Truro Livestock Mart or some are sold as home kill (boxed lamb).

In a bid to move forward with recording, an electronic weigh crate and EID reader have been invested in to compliment the detailed breeding records that Sarah has been keeping over the years. 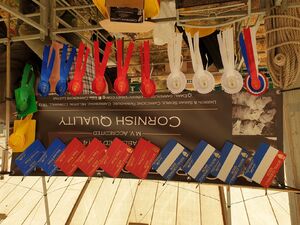 Showing has become a major part of what Darren and Sarah do, not only do they enjoy it, but it has become a vital way to market their stock. “We started with a couple of shows in 2017 and got a couple of rosettes which spurred us on. Having joined the MVA scheme in 2018 we were able to show at the Royal Cornwall Show where our ram was placed breed and male champion, we were over the moon.” This was followed by further success the following year with the same ram winning champion male again. “More recently we competed with shearling ram Iggy in the Society National Virtual Show 2020, he was placed 4th before going to Exeter Sale and selling for 800gns. Not the dizzy heights of what some fetch but for only our third year and our third ram sold at a Society sale we were really pleased.“ With successful participation at many of the larger Cornish one day shows and the Okehampton Show, the female stock have also performed well picking up rosettes of many colours.

The goal is very much to keep improving. Darren says, “if it takes longer each year to select your replacements then you know you are being harder on yourself and your flock so you must be improving”. They will look to increase numbers but not at the expense of quality.

“We have fallen in love with the breed and would like to continue to improve our flock and promote the breed to the best of our ability”. Darren & Sarah.