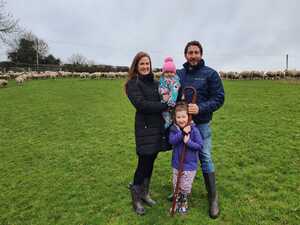 On pastures green on the rolling Drumlin hills of Cavan, Ireland at the end of a tranquil country lane sits the proud farmstead of young sheep farmer David Beattie.  On this land forged by past generations of hard work and devotion to agriculture sits a modern and forward-thinking farming family.  David always had farming and animal breeding in his upbringing. His academic ventures included studying engineering and fabrication in metalwork. Some of his summers were spent on large arable and livestock farms in the UK where a vast amount of experience, knowledge and good times were had.

On return to the Emerald Isle, David worked with a local engineering company which dealt mainly with agricultural equipment and design and build projects for farms.

David’s home farm was leased out for approximately 20 years but the land was on his mind through the years of working locally and abroad. With that in mind he looked at a number of farming enterprises for the land on the end of the lease.  "I was lucky enough to marry my good wife Orlaith around the time I started farming. Orlaith is not from a farming background, so profitable farming was essential or serious questions would be asked" David jokes. 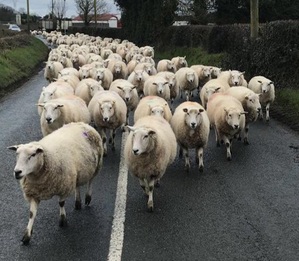 Dairy and suckler farming is a stronghold within the surrounding area. However, with the establishment of his own metal fabrication business and a drive for a farm income from land already owned he decided on the sheep farming industry. With a blank canvas to work with his next decision was which breed of sheep to farm.

According to David his search began with a chance encounter of an article from a very old copy of his local newspaper dated from 1985 found while renovating the old farm house. The first line of the article read "Profitability in sheep farming is always determined by the number of lambs available for sale"  This was the light bulb moment that led David to search for a prolific breed that did not require the additional labour most prolific breeds tend to generate and only one ticked the right boxes, "the Lleyn".

Sourcing the stock was next on David’s list. A twenty minute journey took him to the established flock of Clifford Richardson, flock number 2160, which is where David purchased his first 15 ewe lambs and so his life as a sheep farmer began.  David added to the flock with sheep purchased from the society sales over the years. Along with his expanding metal fabrication business his flock of Lleyn sheep was also growing and performing well.  He said “I was very happy with the breed, good hardy ewes with plenty of milk leaving a good crop of lambs. Longevity of the breeding females was also remarkable with a typical ewe rearing 10-12 lambs in her lifetime”. 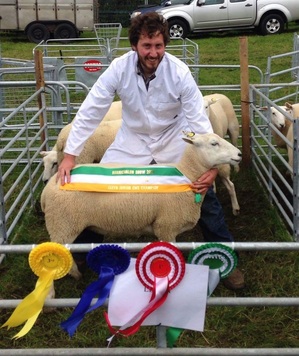 As in any farming enterprise improvements were made along the way. David installed new sheep fences, handling facilities, reseeded grasslands and in 2017 he erected a purpose-built sheep shed to cater for his increased workload with his ever-growing flock.  David’s 400 strong flock holds him as the owner of one of the largest Pedigree Lleyn flocks in the country.

Each year David breeds from the mature ewes, hogget replacements and ewe lambs. Lambing percentages are always close to 200%, with the ewe lambs at 135%. Once his ewe lambs hit a target weight of 48kg they work well lambing as one-year olds.

David’s whole flock is recorded on the Sheep Ireland format. This format, like many other recording systems, follows parentage, birth weight, lambing ease and growth rate at particular intervals. The system in turn generates a 1-5 star score for each animal, 5 being the best score. Such a wealth of information allows David to be very selective with his breeding stock, both males and females, so that the best performers are retained and offered for sale to other breeders.  “The recording adds to my general workload but the data I have on my flock really means a lot in regards to replacement selection" David said.

On the back of this data David’s flock is rated within the top Lleyn breeders in the country which adds to the value of his flock and generates interest at the yearly home and society sheep sales with new and returning customers being welcomed. 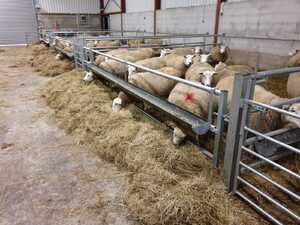 David is a member of the Southern Ireland Lleyn Breeders Club and has recently been appointed as Chairman. “I am keen to further promote and welcome new members to the club, therefore enabling the Lleyn breed to continue to grow within the sheep sector” David adds.

Over the years David has experimented by lambing early, late, indoors and outdoors. He found that lambing outdoors works very well due to the excellent mothering abilities of the Lleyn breed. David found that lambing a little bit later, towards the end of March/early April when grass is available suits his system best. Ewes are housed in the shed within a few weeks of lambing, after enduring tough conditions on winter grazing, allowing for the lambs to be tagged, recorded and tailed and put out to grass straight away.

It can be seen from the performance and look of David’s flock, his yard set up, his grassland management and his interest in the breed that the Lleyn is very happy and at home on the Drumlins of Dillagh. So much so in fact that David is willing to show it all off this year by hosting the Southern Ireland Lleyn Breed Open Day which is due to held on 26th of June.

I do hope that you can attend the open day and see first hand the true traits of the Lleyn sheep breed.