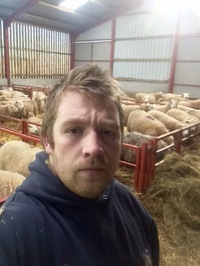 Huw Jones farms with his parents Tegwyn & Catrin alongside brother Guto at Talyglannau, Mallwyd, Machynlleth.  They run two farms, the main steading being Talyglannau, 1050 acres which runs from 700-1850ft.  This land is described as 70% mountain with the rest either steep or heavy wet clay land.  The typical rainfall is about 80 inches.  They also have Elgar, 200 acres running from 500 to 1000ft.  This is what the family describe as better land as its drier and better sheep grazing with a lesser rainfall of 50 inches.

They farm at the main holding 800 Welsh Mountain ewes and 25 Welsh Black suckler cattle.  At Elgar they have 250 registered Lleyn ewes and 300 Lleyn x ewes with the store cattle from the Welsh Black summered alongside.  They have also invested recently in three hydro-electric turbines.

The family first got into Lleyn in 2005 when they bought Lleyn rams to put over their poorer Welsh ewes.  They had previously been using terminal sires but had struggled with lambing difficulties.  They found the Lleyn x lambs were much easier lambed hence fewer losses but still produced a useful carcase lamb.  The ewes were going away with two lambs that could then be finished off grass, this suited their system well.

In 2007 they put 150 Welsh ewes to the Lleyn ram.  30 of the Lleyn x Welsh ewe lambs were retained for what was the new farm at Elgar to help increase lambing percentage.  Huw says “it worked so they put half of the speckled faces that they bought with the farm to the Lleyn the following year to produce a Lleyn x ewe and within a couple of years the lambing percentage had increased from 130 to 160%.”  Better still these Lleyn x ewes were happy rearing two lambs whilst also looking after themselves.  This meant we did not need to buy in replacements and could control disease risk.  Huw continues today to farm these Lleyn x ewes and runs them with terminal sires to produce lamb which is sold through farmers markets in Machynlleth or dead weight to Randall Parker Foods. 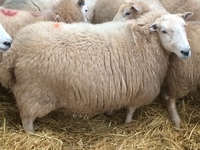 Huw intends to move the whole flock at Elgar in to a fully registered flock of Lleyn but he intends to continue using the Lleyn ram as a crossing sire over the Welsh ewes at home.

The Lleyn x Welsh lambs not being kept for breeding replacements are sold deadweight.  They are a much heavier carcase than the pure Welsh.  Huw says “we have found there is little call for lambs under 15kg so the Lleyn x hits the heavier spec and gives us a higher price per kilo”.  With the registered pure bred Lleyn, approximately 120 of the ewe lambs are being kept for breeding including 10-15 rams.  The others are all sold deadweight alongside the crossbreds.

When buying a Lleyn ram, Huw says “the ram must take the eye when passing the pen.  The first thing I then look at are the teeth, it must have good mouth or I won’t look at it again.  I then look at confirmation, length, skin and a smart head.  If available, I look at EBV’s and look closely at the maternal ability figures”.

Huw buys most of his rams from the Society sale at Ruthin in September.  He has bought some quality stock, both females and rams.  His purchases often feature in the sale report top prices.  Huw does not regret this as he is happy with the results and notes that they are lasting well with some ewes still in the flock at ten years of age. Huw has also retained some rams in the flock from his own breeding.

Huw is very happy with how the Lleyn has worked as a crossing ram for him.  “The Lleyn x progeny are multi-purpose, they provide a good crossing lamb which hits the spec R-U grades and can also provide you with an easily kept ewe”.

Huw is interested in the flock performance and using on-farm software he is identifying poor performers in his registered flock of Lleyn.  Anything which is regarded as a poor performer is crossed with a terminal to prevent its progeny from entering the flock.  Huw said “I aim to get rid of ewes with any problems during lambing, it’s a busy enough time without additional problems’.

Huw summed up by saying he believes the Lleyn to be a fantastic breeding and crossing breed with a bright future.