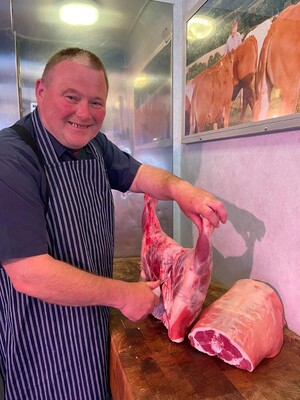 Having previously run pedigree Beltex Mr Rattray was looking for a commercial ewe to run alongside his pedigree flock and chose Lleyn as they provided easy access to large numbers of MV Accredited females.

“My first experience of Lleyn was as embryo recipients for the Beltex flock. Any that didn’t hold embryos went back to a Beltex tup and I was pleasantly surprised by the quality of the lamb they produced,” he explains.

“The lambs were easily born, quick to suckle and grew incredibly well. The Lleyn ewes milked well and were extremely maternal, importantly unlike like some maternal breeds and crossbreeds they didn’t need masses of food to milk well either.

“We introduced creep to the lambs at about three weeks old and they really flew, finishing exceptionally quickly and producing great carcasses for use in our own shop,” says Mr Rattray.

Fast forward a few years and, with time pressures building in the butchery business, Mr Rattray has sold his Beltex flock and is running a flock of Lleyn ewes all put to Beltex tups. “Pedigree ewes were taking up more time than I had to spare and with the way things have gone as a result of Covid-19 I’m glad I sold the flock at the end of 2019. The butchers’ shop has been busier than ever, and I simply would not have had the time to put into the pedigree flock that it needed.

“That’s the great thing about the Lleyn ewes, they don’t need a lot of fuss or molly coddling, they’re a great functional ewe which gets on with the job of rearing their lambs.” 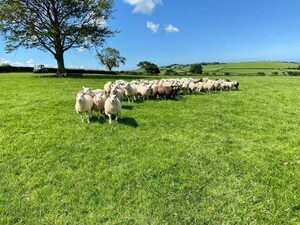 Keeping things simple Mr Rattray buys in replacements as shearling ewes rather than breeding his own Lleyn, with the aim being to buy strong, lengthy shearlings with the potential to produce fast growing, quality lambs.

“Putting the Beltex on the Lleyn is the ideal combination in my mind, the Beltex brings the shape and the Lleyn brings the growth and milk. The two together produce a carcass lamb that grades as a U3L at 21-23kg with superb quality meat.

“We could breed our own Lleyn, but while the Lleyn wether lamb would be an acceptable carcass for our business there is a lot more value in a Beltex cross lamb and I can justify buying better Lleyn ewes as a result. Also, buying in replacements helps keep the system as simple as possible which is an important consideration.”

Lambing from the third week of February onwards, Mr Rattray houses the ewes in the first week of January, shearing them at the same time with a cover comb to ensure ewes have a decent growth of wool again by the time they are turned out after lambing.

“Ewes are fed good quality silage in the run up to lambing and twin bearing ewes receive up to 0.75kg/day of concentrate starting at about four weeks pre-lambing. Singles are only fed for the final two weeks and receive about 0.5kg/day at most. 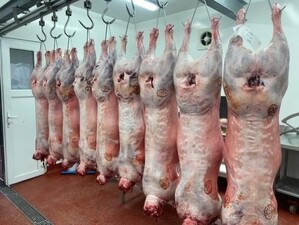 Last year saw the first draw of single lambs sent to slaughter in mid-May, with the first of the twins following along not long after and all lambs slaughtered by the end of August. “I aim to get most of them gone off their mothers, but generally have a small batch which will get weaned and then finished off grass in late summer.”

With the flock generally scanning at between 180% and 185% Mr Rattray is far from able to fulfil all of his butchery business’ needs from his own lambs, with between 20 and 25 lambs a week needed. However, he does actively seek similarly bred lambs when buying in from other farms.

“It’s a great cross and the hardiness and longevity of the Lleyn ewe is a real bonus, helping keep depreciation costs down in the flock, with ewes teeth and udders remaining sound.

“Being able to easily buy MV Accredited replacements is a major bonus too as it is one less health problem to worry about and MV can often be a gateway to other issues too, with ewes’ immune system compromised meaning other infections can take hold more easily,” adds Mr Rattray.