Lleyn in the country of beer & chocolates. 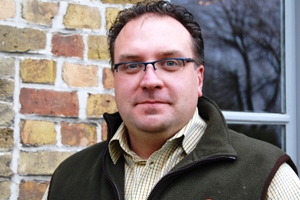 I guess it is the first time ever an article about Belgium appears in the Lleyn flock book? So maybe it is best that I start with some facts & figures about Belgium. For a lot of people, Belgium is the country they pass through when travelling to Holland, Germany or other summer and winter destinations. Maybe our capital, Brussels, is more recognised than the country itself, every farmer in Europe mentions the capital of Europe (sorry France/Strasbourg) at least once a day.

Belgium is a small country about the size of Wales with almost 11 million inhabitants, so we are one of the most densely populated countries in the world. Maybe that is one of the reasons why I am such a great admirer of the spacious British countryside! The demographical and political situation in Belgium is somewhat ‘complex’. There are three official languages in Belgium, Dutch (or Flemish as we like to call it) is spoken in Flanders, which is the northern part of the country. French is spoken in the southern part of Belgium which is called ‘Wallonie’. After the war we inherited a small German speaking part in the east of the country. Brussels has always been claimed by both sides of the language border, the solution is the creation of a kind of ‘Brussels D.C.’ It has its own parliament and PM. Above everything we have a federal government with a Belgian parliament and Belgian Prime Minister. Not only do we hold the world record in negotiating a government (it took us 18 months), we also have 5 parliaments and 5 Prime Ministers in total. Our federal government consists for the moment of 6 parties (3 Flemish and 3 French), so we know everything about coalitions! Albert I, is our King, he is the ‘superglue’ that holds everything together for the moment. Although I am (and a lot of Belgians with me) convinced that Belgium will remain one country as a separation will be too complex (Brussels is only one problem nobody knows how to solve when we split the country). BUT, when it comes to soccer and beer… we are all Belgians!

I grew up on my parent’s farm in the village of ‘Lo’ which is situated in the western part of the country, 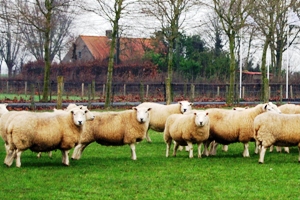 only a few miles from the battlefields of Ypres and not far from the sea and the French border. My parent’s farm was 30ha arable combined with a pig finishing unit for approximately 1000 pigs. After leaving school in 1996 with a degree in marketing I started as an independent event organiser, travelling around Europe to organise events and teambuilding activities for mainly Belgium based companies. At the end of the nineties I started working as a consultant for the major Belgian Agricultural Show ‘Agribex’, which is organised every 2 years in Brussels. Since 2005, I have been in charge of the livestock section of the show which combines my two largest passions; livestock and event organisation. In 2006 I founded a new company in which I could cherish another passion of mine – Great Britain. With my company ‘Lootvoet Animal Products & Services’ I import & distribute animal related British products such as Dodson & Horrell horse feed & pet foods, Bedmax shavings, Jacksons Fencing, Dallas Keith supplements.

I have been involved in sheep as far as my memory goes back. My parent’s farm was mainly arable & pigs, although we always had a small flock of commercial ewes in a pasture my father couldn’t turn into arable. My Uncle was a keen Texel (that’s what Beltex are called in Belgium) breeder and when he died, I at 15 years old took over his pedigree flock of 30 ewes which is already a ‘big’ flock in Belgium. Belgium totals only a couple of hundred thousand sheep with approximately 40000 holdings, so in average a sheep holding keeps between 5 and 10 sheep. This means also that there are hardly any professional sheep farmers in Belgium. I don’t think you will find ten of them in the whole country. 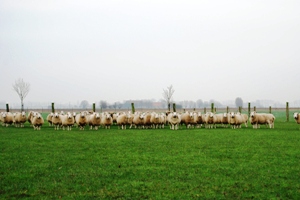 country there is not much room for large farms. The average farm in the north of the country will be around 50ha, whereas it will be more towards 100ha in the southern region. In order to maximise profitability on a limited surface, it is typical for a Belgian farmer to have a mix of milking cows, pigs and arable.

In 1997, I became the secretary of the Belgian Sheep Society in which all pedigree breeds were represented. At that time, there were only five official breeds in Belgium; Texel, Suffolk, Hampshire Down, Bleu du Maine and Ile de France. Although small we were one of the first countries in the world to have a fully computerised flock bock (beginning of the nineties) so I never had to write a pedigree certificate by hand. With less than 10000 lambs registered per year (most of them Texels) it was even less than a part time job.
When the Society split in 2006 into a Flemish and French speaking structure (as a result of a political decision in 2001 which delegated agriculture matters to the regional governments) I stayed on as secretary of the Flemish Society for another four years until the end of 2010.

It was during my time as secretary of the Belgian Sheep Society that I first met Lleyn sheep. Therefore I have to go back to the year 2000 in which I received a phone call from Richard Williams from Brampton Bryan (Herefordshire) who was looking to buy some Beltex rams. I invited him over and together we visited some well know flocks and he ended up buying seven rams. I agreed to bring them over myself as I intended to visit NSA Sheep 2000 together with a fellow Belgian sheep farmer. We arrived at our B&B in Malvern and in the parking area we loaded the rams into the trailer of Richard’s brother, Roger Williams who proposed not to pay for the rams but to trade them for some of his Lleyn sheep. I understood the British humour in his proposal, but I didn’t understand what kind of sheep he was talking about!

After Roger’s death in 2004, Richard took over his Lleyns (flock 967) and as I was regularly visiting Richard I got to know the breed and its characteristics. Richard convinced me to try them and in 2006, he sorted out 20 ewes and a ram for me with Mick Wright (flock 0066) which were the foundations of my Lleyn flock.

I lost the ram just before the beginning of his third season. It was impossible to get sheep over due to the FMD outbreak in 2007 so I ended up that year without any Lleyn rams. I used a Belgian Texel ram on the Lleyn for two consecutive years. The difference between other crosses on my farm and my Lleyn crosses were remarkable and for me Beltex x Lleyn lambs come very close to the perfection. The Lleyn ewe is a superb mother which doesn’t need much looking after and the Beltex is the ideal terminal sire. 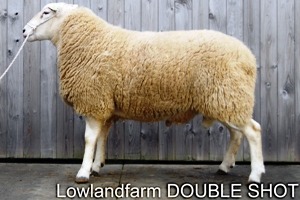 Six years ago, I was lambing more than 250 ewes, but due to my other professional activities, I had to cut back numbers and I am aiming at a closed flock of 100 Lleyn ewes. The Lleyn really matches the profile of the kind of sheep I am looking for; hardy, prolific (between 175 and 200%), easy lambing, tight skin and a good cross potential with a Beltex. In recent years, I have built up numbers through imports, in 2010 from Christine Lewis (flock 1159) and Dick Roper (flock 1073). I bought Roseland ANARION in 2011 at the Ruthin sale, he has been used for the last two years as my stock ram to produce females with good confirmation and tight skins. A home bred ram, Lowlandfarm DOUBLE SHOT (out of a Lewis ewe and a Bullock x McCurdie sire), will be used in the coming season.

I hope to buy some quality females in the UK in 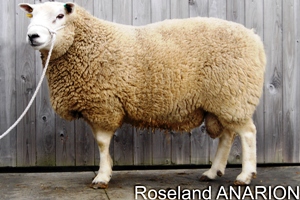 2013 in order to reach my number of 100 ewes with which I can start to promote the breed in Belgium. As before, I will continue to cross a small part of the ewe flock with a Belgian Texel ram to show potential customers the quality butchers lamb you can produce with minimum input.

I still have a lot to learn about the breed. I do not understand a word of the conversations in Welsh between the sheep and my sheepdog (Queen, which was bred and trained in Wales by Mr. Harris), but I am certainly convinced of the future for the breed on the continent.

Last but not least, I invite any Lleyn breeder travelling through Belgium in the future to give me a ring in advance to see if I am around. We are only 10 miles from the motorway and we always have some special Belgian beer in the fridge!