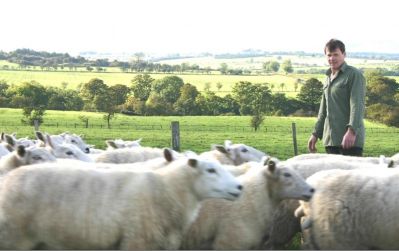 The 2017 winner of the AHDB Beef & Lamb Better Returns Programme Improved Flock Award for Lleyn┬Āsheep is the Thistleyhaugh flock owned by the Nelless family, at Thistleyhaugh Farm, Northumberland. This award is presented to the English Signet performance recorded flock that makes the greatest improvement in the breeding potential of the lamb crop during the previous year.

The AHDB Better Returns Programme aims to highlight the financial impact that improved breeding and better lamb selection strategies can have on commercial flock profitability.

This award seeks to reward those breeders that are using Estimated Breeding Values to enhance the performance of their flocks and assist them to promote their achievement. The impact of performance recorded stock is significant and is increasing every year because of the activities of progressive farmers.

Duncan and his brother Angus are 4th Generation farmers on their family farm in Northumberland. Dad, Henry still works on their 1400 acre farm where as well as their Pedigree Lleyn flock they have 140 suckler cows where they also finish all the progeny on site, they rear 1800 pigs outdoors as well as a free range poultry enterprise for meat production as well as ducks and turkeys.

The Lleyn flock was established in Thistleyhaugh in 1997 when they were looking to change to running a closed flock. This was due to increasing costs involved with buying in replacements and the ongoing risks associated with continually buying in new stock such as disease transfer. To combat this the NellessŌĆÖ decided to progress on to breeding Lleyns.

The Thistleyhaugh flock began performance recording in 2007 after the introduction of Border Software and the use of EIDs. Prior to EIDs, performance recording was not an option due to the extensive number of sheep kept and thus the labour and time that would be required to do it properly.

Duncan mainly concentrates on maternal traits such as; 8 week weight and maternal ability. He is also interested in breeding for parasite resistance through the new Saliva IgA Project combined with FEC ŌĆō Faecal Egg Count. This new service uses saliva samples to identify levels of Immunoglobulin A which have been found to be related to Teladorsagia circumcinta worms which have a detrimental effect of sheep. This will be available on the website shortly for Lleyn breeders, keep checking the website ŌĆō http://www.signetfbc.co.uk/ for updates.

Thistleyhaugh Lleyns have customers which come every year to buy their rams. They usually sell at the society Lleyn sale at Carlisle in September. He finds that having a performance recorded flock does help him when selling privately or through an auction especially as they do not show their sheep so have built up a reputation through word of mouth.

When regarding the future, Thistleyhaugh have bought new land in an upland area. Therefore decisions will be made on how to stock the land and whether the recorded flock numbers shall increase. At Thistleyhaugh they currently record all the sheep on farm; the Pedigree A Lleyn flock as well as their B Lleyn flock which is used for Signets RamCompare project.

Duncan is really pleased that he has won the Improved Flock Awards for the Lleyns this year and is really looking forward to the new index for the breed and the potential of new genetics and new projects that will come in the future.